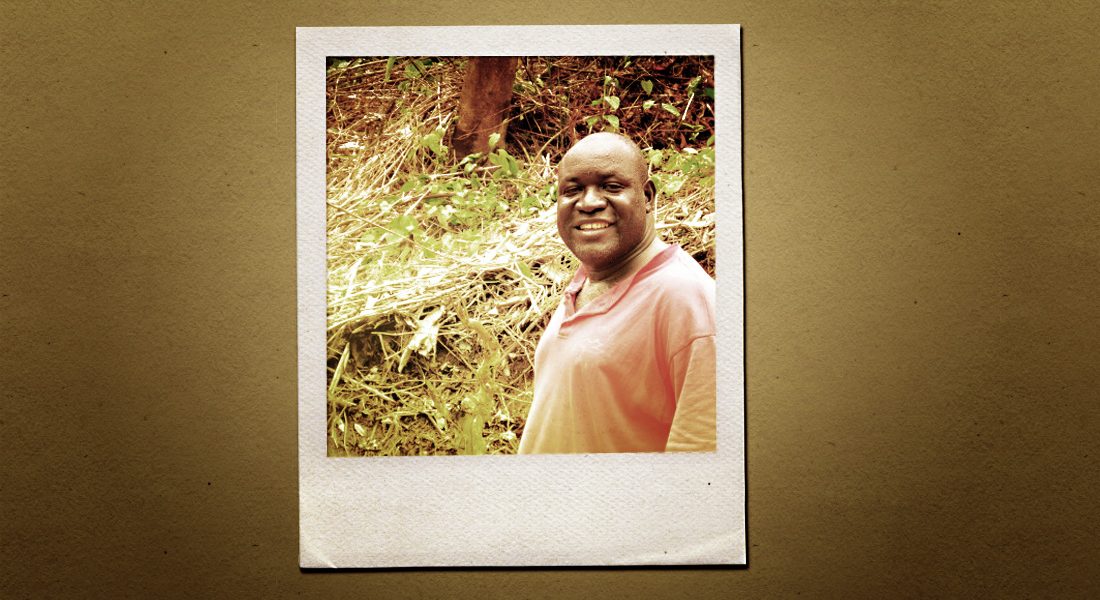 Just as I was leaving the office in Mamba Point, in Liberia, a guy turns around and says, “Hey, have a look!” Piano Teeth spoke to me in a firm, hoarse, commanding voice. He was crouching down on the pavement by the bend, almost hunched over as he entertained himself with the finishing details of an African mask, maybe made of ebony. As always, he took shelter under a beautiful mango tree, surrounded by trinkets scattered around.

There was a parasol that had once been yellow, and several smaller storage boxes that were protected by flimsy grating and housed a wad of notes waiting to be exchanged along with many mobile phone cards: Cellcom or Lonestar.

“Hey, have a look”, he says again. It’s been quite a few days now that I have been wagging my index finger at the street vendor kind of saying that I’d come by later or another day. But he never stops piling on the pressure, every day, “Have a look.” Indeed, as soon as I set foot on the pothole-ridden tarmac of UN Drive, there he is again; standing up and getting ready, steady, to charge at me.

I keep on wagging my index finger at him every afternoon, but today, or maybe yesterday, I can’t help but feel the outline of an unstoppable and involuntary smile from forming on my lips, to which the vendor smiles back, opening his enormous mouth and showing his piano teeth.

There he is, smiling, smiling, almost giggling, and I have no choice in the matter but to walk up towards him.

I know that I’ll be the one to lose out; I know that the next thing to happen is going to be some kind of mini scam, but still I walk and make my way towards the shade under the mango tree. “Piano Teeth” welcomes me and immediately lifts two busts made of varnished wood and explains: “Man, woman.”

This is the man; this is the woman. I watch. The woman’s face is, let’s say, well-made. She wears her braided hair in a commanding bun on the top of her head. She has a little turned-up nose, sleepy eyes and full lips that are not too thick. She’s got a certain something.

But as I look at the man’s profile, all I can think about is that sucker at school, the one you wanted to give a blow on the back of the neck to as you queued up to go into class. Man, his hair is just not on! It looks as though it’s been combed flat, dull, with a middle parting, that, to top it off, makes his hairline look all the more receding.

What’s more, his ears are tiny and unreal; his eyes are closed whilst his rather big nose shoots out above his thick lower lip. But “Piano Teeth” shakes the figures in my face and smiles again while he repeatedly nods away and reaffirms, “Man, woman.”

I start opening my wallet.

But. There’s more. He also offers me a cone-shaped little house with a thatched roof. I don’t want to take anything else, I want to get out of there, but “Piano Teeth” sticks the house right under my nose and opens his mouth again.

His mates, the neighbouring street vendors, let loose a collective giggle but he gives them a dirty look, warning them not to spoil his sale.

You don’t play with the food that feeds you! Everyone knows that.

I also take the little house…

“Piano Teeth” then asks me to pay a sum that I accept without question. It’s not much and too much. But actually, possibly, maybe, perhaps, who knows, could be. I have probably paid him so that he can leave me alone once and for all. Basically.

But it’s not that easy. As I hand over a few crumpled dollars, “Piano Teeth” starts opening up a chest and goes on to show me some Liberian coins from back in the day of Doe, which, according to him, are invaluable…blah, blah, blah.  I look towards my right and hear more giggling, and I start wagging my index finger, saying no once again.

“Later man, tomorrow, see you around, have to go…” I wag my finger so much that “Piano Teeth” realises that he is beginning to break my balls… He openly smiles again, this time by way of farewell. Right. We say goodbye – clack – and I make my way back on the tarmac ridden with potholes.

That’s me, foolishly walking along carrying a black plastic bag with several ugly mugs and a little house. Actually, to tell you the truth, I am quite happy because my home looks rather lifeless. I need ornaments. Lo and behold, I can now stick this sucker and this chick side by side, almost kissing each other. Some are lucky.

Man and woman. But after walking around and around, looking to see where I’d have the best shot, like Orson Welles in Citizen Kane, I realise that this couple just don’t make a good match. They can’t live together. They have to separate. It’s quite clear. So I start increasing the distance between the two faces and a ray of light shines into the living room and whispers into my ear that this works, that now the house should sit on the dining room table so that everything is in harmony. I obey, and the ray of light…

Of course, at the office the next day I am told that I have paid three times as much for those wooden figures. I don’t even raise an eyebrow, but rather shrug my shoulders, stupidly happy to confirm my mistaken investment. In the afternoon I leave the office, step onto the UN Drive tarmac, full of pot-holes, and then indeed, I see “Piano Teeth” suddenly standing up, as if he’d seen a Coca Cola in a desert.

And I already know. I know that I have a finger known as the index finger. And it wags.

EXPATS ALWAYS ASK THE SAME QUESTIONS
THOSE WHO LEAVE LIBERIA