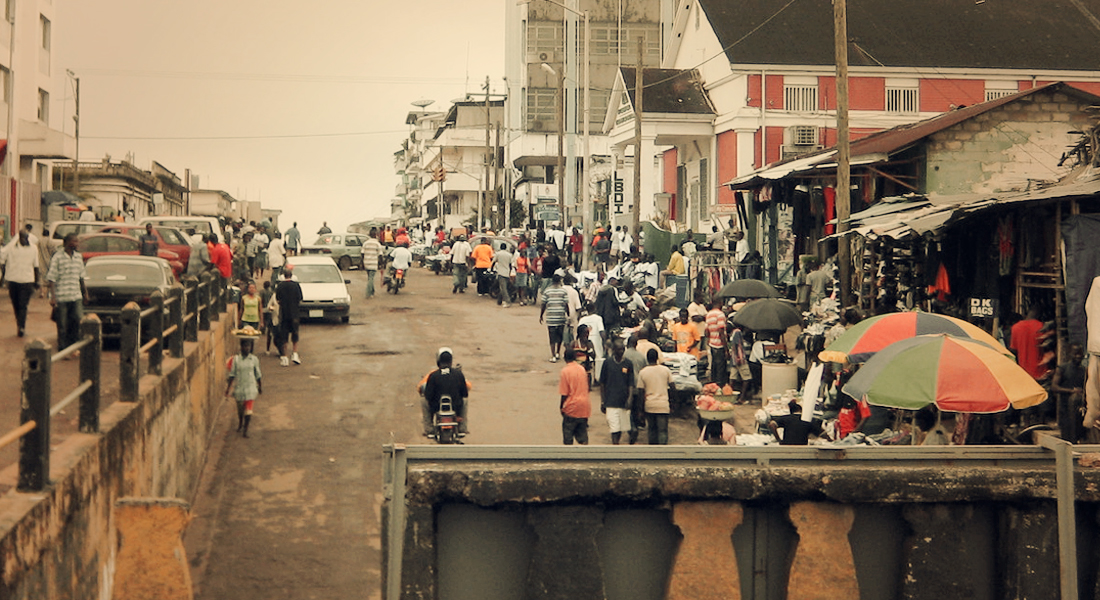 “BECAUSE IF NOT, I’LL DIE”. Sitting at a round, plastic table. We drink some Club Beers. Our pupils dilate and take on the form of small sugared ovals. That go up and down. Kevin comes closer to us and tells us, “Because if not, you die… So this weekend I went to Buchanan. You have to leave. You know, sometimes you have to get out of Monrovia”. And he tells us his journey in first person, in a velvety voice:

There were three of us, since the Somali girl had backed out at the final hour. It was just Anesa, the Slovene, Victor, and me, Kevin. Why did we decide to go to Buchanan? Because in November, and February, we get tired, you know. Sometimes we need to breathe. We need to come to terms with life every now and then. And recall that there are other people, and at the end of it all, a door. That could be open.

Happiness shows its face from time to time and I thought I recognised it as I left the compound and found Victor and Anesa in front of a white van on UN Drive, waiting for me.
Saturday morning, full of light, tired of Monday, Tuesday, Wednesday, Thursday and Friday. You feel rebellious and free, getting into that van and leaving Monrovia. Finally.

Later Victor revs the engine and we hear David Bowie’s Changes as we move forward along Monrovian roads that start out being smooth and friendly only to turn into dirt tracks, potholes, bumps and jumps. We are used to it now, brother. We’re surrounded by zinc and shacks and the Liberian logic that escapes us once again.

I only know that we saw tons of people walking in all directions, scrambling here and there. As always, a little while later I don’t remember anything. I had tried to concentrate on the images bouncing off the glass, but I see nothing.

Only people, washbasins, dusty refrigerators and garish, multicoloured cotton shirts, signs that barely hold up, loosely attached to four bits of wood and zinc advertising “barber shop”, “business centre”, bottles of petrol, violet coloured I think, mangoes, musangas, palm trees, and every now and then the sea, and David Bowie on the radio man, David Bowie singing us Changes and there, off we go, free.

We are not practical people. We never have been. We’d rather take the stairs than the elevator. That way we can get lost almost on purpose, drawn to the potholes and the ditches, turning a three hour journey into one of more than three hundred minutes. Because we don’t like elevators. As far as conversations go, they are lively and blue in the van.

Because, you know, now we don’t care about anything. There are the three of us, united, pumped up on a Saturday morning, burned out by Monday, Tuesday, Wednesday, Thursday, Sundays. And no-one can stop us.

Victor is driving, but at one stage Anesa takes control of the steering wheel while he moves to the back seat, where he sees the Slovene in the wing mirror: sunglasses, lank hair tied back, clear countenance, her lips. Recalling a dream by Kusturica. Life is a miracle. To the sound of David Bowie. Making headway, burned out by Monday and by Wednesday… The Slovene, Anesa, talks a lot. She’s a ball of energy, who, when she’s not driving, puts a hand on your shoulder and tells you about when she lived in the old Yugoslavia and she was made to stick a photo of Tito in all of her notebooks, to parade with red bandanas, believing Monday was all there was. In the midst of the bumps and the potholes she sways to the rhythm of David Bowie as though it were a song that could finally lift you up and give you wings. And suddenly, you believe that you will never die, that you are never going to die.

Because we suspect that we are human beings who need to eat something from time to time. Meanwhile, Buchanan greets us with its frantic main street, jam-packed with cars, noise, people, dust and colours. Because there are always colours here. Nobody can stop us.

On arriving at the terrace of the “restaurant”, not very far away from the only disco in this whole place, the famous Black and White, we see the ocean, which always saves us. A beach, silences, all becoming united to ward off the black points. Even the Lebanese owner greets us with a complicit, drowsy, plump smile, one of those smiles that transmit peace. There’s nobody else here, apart from another Lebanese guy smoking a hookah as though he has all the time in the world. Let’s stop the world once and for all, I don’t want to keep moving.

We know the food will take a couple of hours to arrive, but we don’t care. Even Drazen, who Anesa calls on her mobile in a wonderful Slavic tongue, doesn’t care. Drazen arrives sweating, but he hasn’t been running. He sweats and sweats and doesn’t know what he’s got. And so I ask him. Why are you sweating, Drazen?