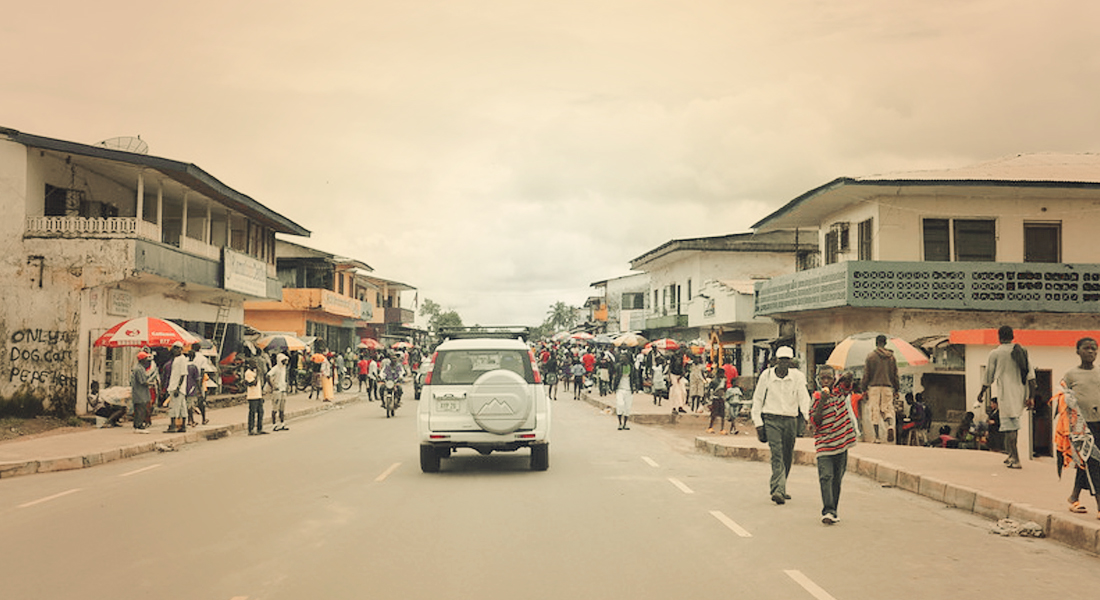 “NO. IT’S NOT MALARIA,” said Drazen, dripping, “it’s something else. Something cold that gets in your bones.” Only the food, which finally arrived in the form of chicken, rice and cassava fish, interrupts the silence. We discover that we are, indeed, hungry, and at the pace of beetroot grey, of a peeling terrace and Balkan flavours, we bring the stockpile to our anxious throats.

Drazen is a soldier. He stands at almost 2 metres tall but when he turns to you, he looks like a good-natured bear, like a father who always takes another sweet out of his pocket. You are in safe hands with him. “Now, for example, in order to go to Slovenia, it’s a nightmare: never-ending borders, passports, paperwork, time, explanations. But anyway, there are places where I don’t want to go back”.

Anesa turns her head to the right and says something in Slovene or Serbo-Croatian, I don’t know. “Dubrovnik”, says Drazen. “I still don’t want to go back to Dubrovnik.” “Why?” I ask, a fish bone making its way down my pharynx. “I don’t know, I don’t know,” Drazen replies.

And when the soldier casts his gaze at the corner of the table, all of a sudden the floorboards start to tremble as though we were on a boat confronted with an unexpected storm, about to capsize. Turning around, we suddenly discover a rainbow of people dressed in hippie gear. A Norwegian blonde stands out from the group, giving instructions to the rest, raising her hands and gesturing with them like a mother conducting her small son’s birthday.

Looking at her, I go back in time, I’m five, six or seven years old, my hair is a little longer, it gives me a warm feeling. I can see balloons and streamers, a chocolate cake. She is a woman from a photograph taken in the sixties, perhaps from California, from a beach somewhere. I smile at her, and she winks back, then I ask her to take our photo.

The afternoon slips away, sinking into violet. Actually we are not having lunch, but dinner. It’s almost seven o’clock and we still need to go to the “hotel”, secure a roof over our heads. Victor is great: he’s reserved three rooms in some hotel in Buchanan. But, he doesn’t remember which one! “I think it was somewhere around here…” Me, Kevin, the guy who sometimes gets tired, remembers entering a dump of a hotel nearby where I came and stayed a few months ago for a change of pace. I can only think of that hotel, but I don’t want to stay in that place…

After five minutes of lurching around in the van, Victor lowers the window and waits for Drazen’s Nissan Patrol to draw up alongside him, only to reveal, “man, I’m lost”. We’re all a little lost, it’s alright. Drazen, the dad, wields a paternal grin, a smile that tastes like a hug, and then he gestures with his head for us to follow him.

In the middle of the chlorophyll night, I begin to think about Vietnam and in drugs, weariness, a good machine gun and an ammunition belt that grazes my knees. We move on in the darkness and finally enter a compound protected by a fence that shelters a vanilla coloured house with seven or eight rooms. It is called Teepoh, or something like that.

The owner of the hostel acknowledges us with his chin, and gestures with his shoulders almost as if he was doing us a favour. He seems like someone who is on the ball. The usual negotiations take place, like haggling at a street market. We come to an agreement, thanks to a decisive comment by Victor, “What would you prefer, that we give you this, or we leave and you get nothing?” He’s boundless, the Latin guy.

Meanwhile, Victor goes back to fighting for Anesa, despite his self-admonition, “she’s pretty but…”. Come hell or high water, just as we like it, the Latin secures the best bed in Teepoh for Anesa, a shiny mosquito net and a tin washbasin of crystal clear water. However, Anesa doesn’t bathe. The Slovene refuses to soak herself with questionable water left to sit in a dark washbasin; she just can’t face that.

I don’t have a problem with the bucket shower, it’s not the first time, much less, so I patiently guide the sponge curiously over my body until I reach the pinnacle: a waterfall. That is to say, the water descending on my body from the bucket above, like a playful waterfall, full of promises with illusions of Iguaçu or Niagara. On the other side of the hallway Victor thinks that Anesa always looks good.

When she comes out of her room after speaking on the phone with someone, Victor remains frozen for at least a couple of seconds faced with this angelic, feminine image, knowing that there is no miracle greater than a woman.

But, next to a tree in the middle of nothing, you can’t hear the music, nor find a place to sit, people to chat to, you’re bothered by the insects of the night, perhaps you’ll catch malaria and, also, you feel alone.

But, in reality I don’t think we know what happens next to a tree in the middle of the darkness because we haven’t been there and I suspect we never will.

We don’t believe that this compound houses a bar and a black terrace covered with green, impenetrable mosquito nets until we see it with our own pupils. We are welcomed with smiles, music, heat, maybe, silence, sadness, survival and iron ore. Perhaps this is how the people who live on Pluto feel. Perhaps.

"A TRIP TO THE MOST SINGULAR COUNTRY IN AFRICA”. CARLOS BATTAGLINI IN GUINEA" (1) OF (6)
I AM HERE YOU BASTARDS
How does it feel to arrive in Liberia, in Africa?