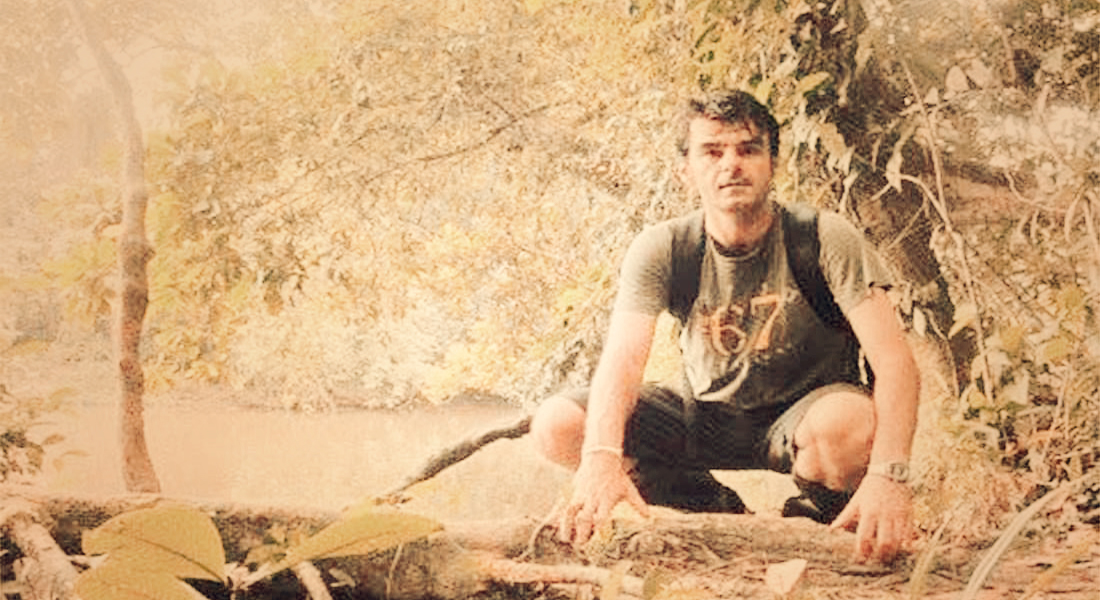 What is it that’s so important you have to say? Well, here goes. Friends, readers, comrades and others, it’s time for me to take off the mask! The time has come for me to introduce myself to all of you! Now listen. My name is Carlos Battaglini, and I am a Spanish writer (from the Canary Islands, to be more exact).

I have been writing for a few years now. From my travels around the world, to literary reviews, wandering through my reflections, without sparing to share with you what takes place in my day-to-day life. Yes, it is true: until now I have always written under a pseudonym, Paul Faraway was the last one. You also know that over the past few years I have had several blogs with different names, most recently, The Sun Can Be Yellow, www.carlosbattaglini.com.

Now, take a look at it and then close your eyes. Ready? OK. Let’s see, now you can look. You see, it is no longer there. Exactly, Paul Faraway no longer exists. And that’s not all. Soon, in a couple of months from now, a handful of weeks, (thousands of breaths) the blog www.carlosbattaglini.com will disappear to make room for the birth of a website that will carry my real name www.carlosbattaglini.com, currently under construction. Vroom, vroom.

Why have you been writing under pseudonyms all these years? You ask me in a nasal voice (slightly unpleasant). I answer you with a question: have you ever heard of discretion? Yeah, you know, I’m talking about those mental paranoia (or mind-fucks as some would say) which dramatically undermine the potential of so many writers, yours included. Yes, by deed and grace, I found it extremely difficult, when it did not cause me great shame, to have to write a blog using my real name.

Let’s say that I was thinking about the guys at the office, about a boss. Or two. Let’s say I was thinking of a family member. Or three. Let’s say I was thinking about acquaintances. And let’s say that I saw them all looking at me with faces of amazement, the horror, the horror. That’s how big that little bastard can grow, whispering a gloomy refrain of “what will they think of me” in the right ear of so many writers. For this and other mysterious reasons, I have always used a pseudonym to write (except a wild and cumbersome first time, but more about that another day).

How do you live behind this mask, man? Well, all this time I’ve been living in anonymity, comfortable and yet restless. Comfortable, because I could write whatever I wanted without facing the paranoia made in me, projecting the scandalised faces of a hostile public. Uncomfortable at the same time, because deep down (oh, the deep down that we all carry) I wanted to write using my real name, once and for all, to leave shame and modesty behind and address the public as I really am. Take that!

Today, (yes, yes I’m talking to you), I repeat, today, I can tell you that unmasking is now a reality. How has all of this come about? Let’s see, come closer so you can hear me. After many years of thinking, many walks on the beach, many a headache from mulling it over, it turned out that there was really only one certainty: the years were passing before my eyes and at the same time my dreams were being postponed over and over again. More sleepless nights, twisting and turning, a few selective consultations, another score of sleepless nights and then, finally I was faced with the big decision. So resounding, inoffensive. Full of fire and harmony.

Which decision? Well, here it is: I’m going to take a break from work for a while to devote myself to writing. Because surely by now, you don’t need me to tell you that literature is not a game. We have already discussed this. Many people believe that writers write when they fall under the effects of some kind of a divine spell, which has been sold as so-called inspiration. Yes, they believe that a writer suddenly gets an unstoppable, almost mystical impulse that levitates them to a mahogany chair where they begin to write words bathed in gold.

In fact, I once told you that I went through a phase when I thought that I should only sit down and write when I got that involuntary impulse that must have come from the heavens. And so, I sat and waited for the so-called inspiration. Did it come? Yes, it did, but only twice in ten years! And to make matters worse, that fever of ‘inspiration’ that I as a believer, believed to be superior, only spat out articles that, in hindsight, could be considered at best passable. Well, thank you.

Yes, we discussed it once: reality isn’t exactly like this. Not at all. Over time, you simply realise that good writing, like all activities that aspire to create something new, require something called hours, hours and hours. And more hours. And putting more hours in. And more hours. Life was like this. Instead of that magic wand, of that so-called inspiration, of those fairy tales, crude reality was jabbing you in the ribs to grant you, perhaps, a fleeting and ephemeral, unreal and ungrateful literary pleasure. Of course, you are only awarded this after having sat your ass in a chair for thousands of hours.

What is to be done? Well, if I was really going to commit to this (and you and I are like that), it was clear that combining an absorbing work schedule (so, so draining) with an even more demanding literary activity was becoming impossible. And as I told you once before, that one time when I was almost in tears, given my lifestyle it was really difficult to produce regular work or to finish a damned book.

I’m sure you can picture it, hours and hours in the office in front of the screen, wondering desperately if I shouldn’t be somewhere else, finally breaking through and writing. And at night? The martyrdom continued, my friend. I came home very tired, drawing strength from weakness to write almost every day, year after year. Always amid nocturnal sighs. The walks on the beach continued, I only talked about my decision to the people who could understand it, very few of them by the way.

Very few – because as you yourself have said many times – most people cling to the stability (believing they will never die) of their mortgage, their children, not pursuing their dreams, not achieving their goals. By renouncing their true desires, they are provided a bourgeois life, their bellies grow, they travel the world, but their eyes don’t shine. Their eyes have stopped shining. It is their eyes that have stopped shining. Do we want to be like them?

You know what, fortunately you will die, just like I will. That is the good news. Because this certainty must propel us to walk our true path once and for all. And that is how I came to write an email to my bosses. It was titled, “A New Life”. And I sent it. And in doing so, I felt a soothing fear. So much relief, so much fear. Finally, we have done it. With fear, of course, but we’ve done it. And then you know that it is an unstoppable force. And that nothing can stop you anymore.

YOU AND I ARE GOING TO DO BIG BUSINESS IN MONROVIA
AND ONE DAY I WENT TO THE BUSH IN LIBERIA (6 of 9) “THE CREEK THAT SPUTTERS BROWN AND GREY WATER”
“THE MILITARY STOPPING PEOPLE IN CONAKRY”. CARLOS BATTAGLINI IN GUINEA (3) of (6)