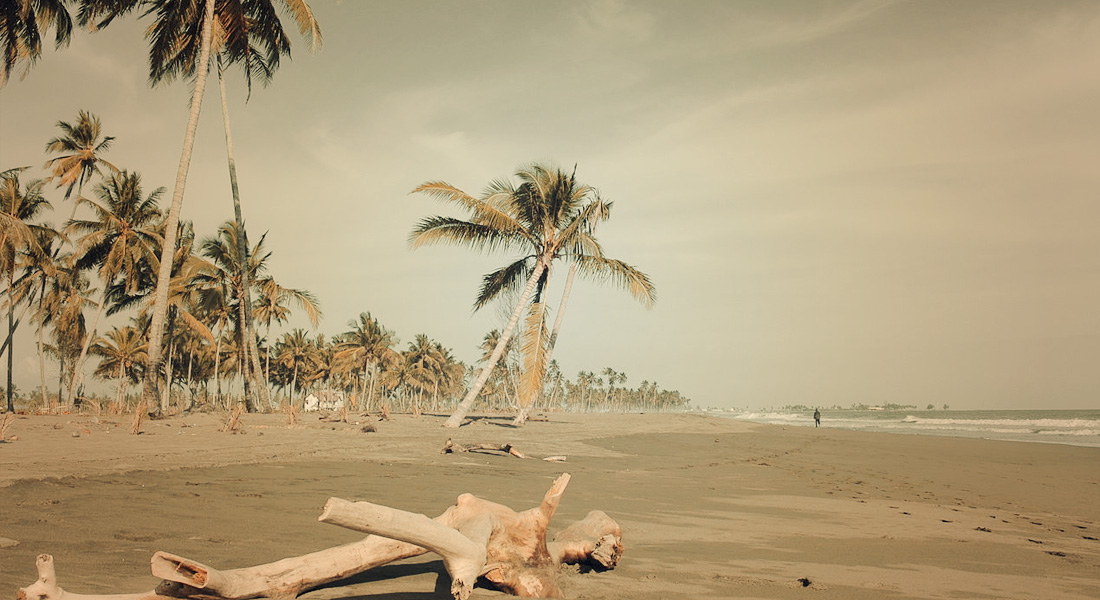 ON BRINGING MY HEAD ABOVE THE SURFACE, I DISCOVERED A GIRL WITH DREADLOCKS (the rasta style triumphed on Room Island), a girl in Bob Marley colours, green, yellow, red who slowly sat beside the boy who was snoozing before my belongings. Unconsciously dragged along by the waves, I left the water and headed towards a corner of the island to lie down. Spread out with my eyes closed, I thought again about disappearing, inspired by an old memory of a television show based on some people from somewhere or another who had abandoned “civilisation” many years before to go and live on a desert island, I believe somewhere in the Pacific.  They had disappeared once and for all. Disappear once and for all.

My nap was enjoyable, infinite and the fish I had ordered, which was a barracuda, didn’t arrive, not even in my dreams. I got up, baptized in calmness and went over to the boy who was “looking after me”, and the girl. The girl looked at my feet, and then she stood up and began to take short walks along the beach. With the help of a stick, she drew a heart in the sand from which a flower emerged. The girl sat down again, chatted with those who were hanging out at the beach, smoked, because here on Room Island everyone smoked a lot, and returned to drawing in the sand. Whereupon, my ‘guardian’ disappeared because the food still hadn’t arrived after more than two hours. The girl sat on the table, the same table that I used to read my Lonely Planet guide book. We were there, the two of us, in the midst of nothing. After a while she left and reappeared with a plate of rice and a little breaded fish and she put it in my hands and sat once more upon the table. Without a sound. And I, charmed, began to eat as I read the guidebook, facing the sea.

On seeing the three boys bringing a tray in which the barracuda rested, I realised that the rice that the girl had given me had nothing to do with the fish that the boys were bringing. That had been an act of African hospitality, a nicety from the girl with the dreadlocks, the only one on the island who didn’t want my money.

On Room Island. Now I wasn’t hungry, I looked at the exquisite barracuda without knowing what to do. One of the boys, who had braids, told me that there had been a problem with the gas. The gas! That was why it had taken so long. And then he told me that the girl had brought me a plate of rice because she would take a cut.

The barracuda was over the top. There were four of them on the tray! I only managed to try a few small pieces and I said to the girl in a timid voice that she should eat it, that I’d give it to her, but she laughed, almost taking the micky out of me in a friendly way and didn’t even take a bite. This girl was wonderful, this woman, who later stood up and went to swim alone, with her blue shorts, playing around in the water, before sitting in the middle of the beach where she let the breeze and her thoughts caress her.

Soon I would have to go back to Conakry, and I hadn’t been able to meet Gilbert, who I’d heard so much about. “Gilbert is in Conakry, he’s sick”, revealed one of the scoundrels. “When he’s here he lives in that house right on the beach with his young Guinean wife”. Samory had told me, before I left for my travels, that Gilbert was an odd type who liked to be alone. The truth is I would have liked to have met this man and learned his grounds for renouncing the “civilised world”, the motives for his voluntary seclusion. I would have liked to hear his reasons. Here, now. And perhaps.

I took a wad of bills out of my wallet and paid the boy with the braids. His face suddenly changed, and he adopted one of those expressions that you get when you find lots of money in the street and don’t want anyone else to see this valuable treasure. However, it took no time for the other boys to arrive and I took the opportunity to step away. I finally managed to be alone and did one of those silly side-to-side walks, where you think about life, Burkina Faso, about the universe. I found the French on one side of the island, with their straw hats about to leave in a small, red boat.

Before them rose a cement structure interspersed with bamboo sticks, maybe a future hotel, where a group of guys laboured.

They gave me steely looks when I walked towards the future building. A look that bluntly invited me to leave that part of the island

Right now. Among the workmen, I recognised the guy who a few hours earlier had sported an Inter Milan T-shirt. Now he was shirtless, his muscular silhouette stood out and he walked quickly in the direction of the rest of the guys, shouting demands for his share of the loot. Suddenly the three guys huddled together, becoming one and holed up in a shed to settle their scores. Then I discovered that the girl hadn’t taken a cut at all, despite assurances from the guy with the braids. She looked at them from time to time from a close distance and later looked in my direction. I was a little far away from her, getting into the blue boat that would take me back to Conakry and I waved at her with a shy hand, but I wasn’t certain that she saw me. I wasn’t certain.

On route to Conakry, jostling around in the boat, moving further away from Room, we skirted around a considerable number of boats stranded near the shore. I saw them there, shapeless, sinister, rigid, rusty and overrun with scrawny men sitting on scraps of metal, where they fished or wandered without purpose.  It was in the middle of this scrapyard where the boat suddenly stopped, about three hundred metres from the shore. The boat lurched, hesitated, we weren’t moving forward. Inside the wooden boat silence reigned, that, and calm. After various desperate and quiet efforts, the boss managed to get the motor to start again, to general laughter. “Other boats don’t manage to start, my friend”, said one of the crew.

At Boulvinet Port Samory was waiting for me with a raised arm. I walked along the port, the hustle and bustle pushing me towards a corner covered in powdered zinc. In this corner, I finished paying the amount agreed in the morning and it made me think about the cash that the captains of these boats took in, and it also made me think if it wouldn’t be this same boss who brought his fellow countrymen, jam-packed together, to the Canarian shores. And it made me think about the sentence pronounced by my landlord, accusing Guinea Conakry of being a dangerous country, or in when Monique had said that there was nothing in Guinea Conakry. What we don’t know is that the ‘nothing’ is rich and immense. That is what I thought under a starry sky at night, in Conakry, the city that didn’t exist.

THOSE WHO LEAVE LIBERIA
THERE IS A DEAD MAN ON MY STREET
DOES AFRICA EXIST? Literary review of Ryszard Kapuscinski’s ‘The Shadow of the Sun’