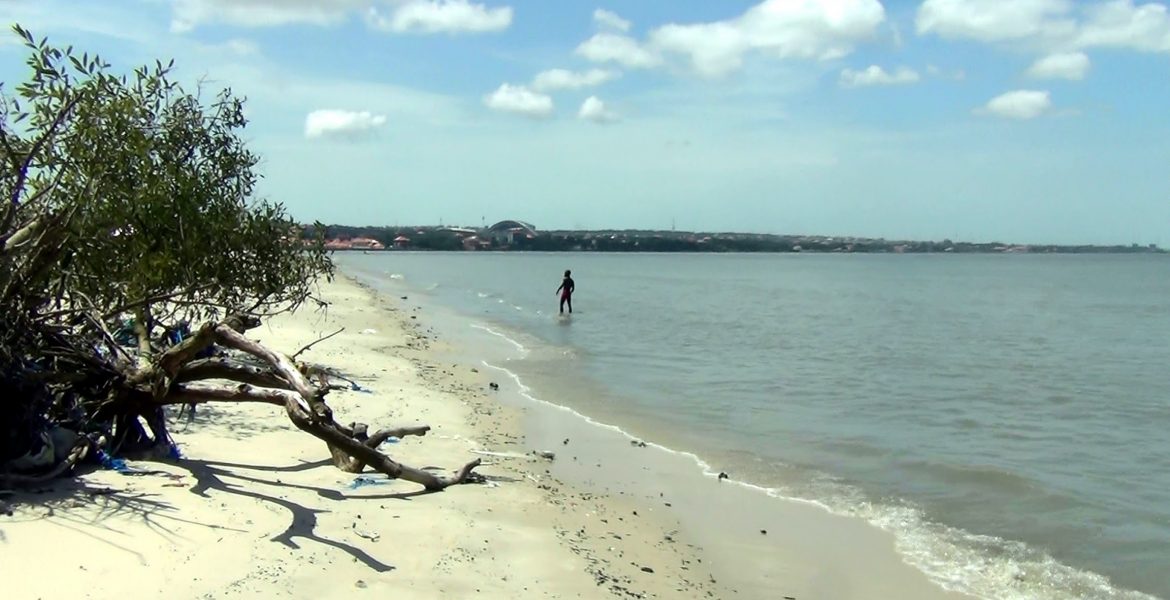 MONIQUE, THE WOMAN WHO HATED (AND LOVED) GUINEA CONAKRY, had allowed another truce with this country on disclosing to me, “if you go to Conakry, go to the islands: an authentic oasis”. Samory smiled inside the red wine Peugeot and started the engine before slowly saying, “Carlos Battaglini heads to Los Islands. Carlos Battaglini will visit Room Island. Carlos Battaglini is in Conakry”. Samory liked saying such sentences in an historic tone, almost fictional, giving one the feeling that they were walking through one of the pages of a book by Stevenson, whose inspiration for writing Treasure Island by the way, according to many Guineans, stemmed precisely from this Room island where I was now headed. The same Samory confessed to me that he had never placed a foot on this island, which in former years had been a key point in the slave trade. “The sea is frightening, the boats move, some of them sink”, said the Guinean right as we were opposite Boulbinet Port.

Here we go. I had spent a few days toughening myself up on the basis of being swindled every time pecuniary matters came into play.

So, after three lessons well learned, I managed to secure a ‘decent’ price to travel to Room Island on board a pirogue made-up in turquoise paint. While we navigated our way to the island, I craned my neck to look behind every now and then, seeing how Conakry became smaller, The Palace of the Nations with its appearance of a football stadium, the greyish Novotel, Boulbinet port…I turned around again and there were the islands, green, mountainous, sandy, friendly. And a little further ahead emerged Room, The Island of Room with a beachfront made up of pretty little houses which sensed, at their backs, the smell of chlorophyll and the hills. The coastline resisted, like a miracle revealed, still detached from the aggressive bricks, the predatory crane.

As soon as we docked the boat at the island, a group of lads arrived, interrupting my peace with their materialistic faces and their foolish flattery. And I had definitely done the right thing coming to the island on a Monday, with the idea of avoiding the tourists (remember: tourists hate tourists) and but for a group of French people recently arrived from Paris and a few Chinese guys in white linen shirts, nobody else arrived on this patch of land all day.

However, the complete solitude struggled to take shape, boycotted by these three boys who surrounded me like fire-proof satellites.

The same ‘Stevenson’ scoundrels couldn’t hide their dismay when I said I would go to visit the hotel that rose up on the other side of the island as recommended by the guide that I was carrying with me. This decision conflicted with the aim of the ragamuffins, who intended to take me to the village… and above all intended that I stay on this same beach where they clearly called the shots. But I remained steadfast and continued walking in search of the other hotel, while the boys escorted me uncomfortably.

I bit my bottom lip. On observing how on the opposite shore of the island, where the other hotel rested, the beach was littered with papers and other refuse, permeating inhospitable neglect. The opposite of a magnet. The boys, satisfied, pulled my arm to return to the first beach. Faced with such a scenario on this side of the island, I bit my upper lip and ended up giving in. During the walk, I discovered another hotel plagued with gaudy flags, covered in raffia and enlivened by chill out music that made you think of turquoise and cobalt and leaving everything once and for all. Further on, I bumped into a spectacular baobab tree, endowing the area with personality and presence. On Room Island.

Now back on the first beach, we negotiated the price for lunch. A heavyset guy who was wearing an Inter Milan shirt, led the conversations. When I told him I wasn’t going to pay the equivalent of thirty-five euros for a plate of fish they all breathed in through their teeth, a sound which denotes annoyance in Africa – “ffti”. We finally came to some kind of an agreement. It wasn’t difficult to figure out that the boys were sidekicks of the boss of the boat that had brought me to the island, and other “merchants” that swarmed the island.

Nonetheless. It was great to be on the island on a Monday. Few people, the silence, islanders emerging from between the palm trees and moving about with that African parsimony, the sea. Right at that moment I went for a swim glancing at my things, which one of the boys had taken upon himself to guard. The other boys had disappeared. All that breathed was peace, and in the sea I thought of being free and doing only what I wanted from now on. I was thinking this while I immersed myself and went underwater. And then thought it once more.

Burning a newspaper. A meeting with Rodney Sieh, director at front page
I AM HERE YOU BASTARDS
There is more life than compounds, offices and dinner parties