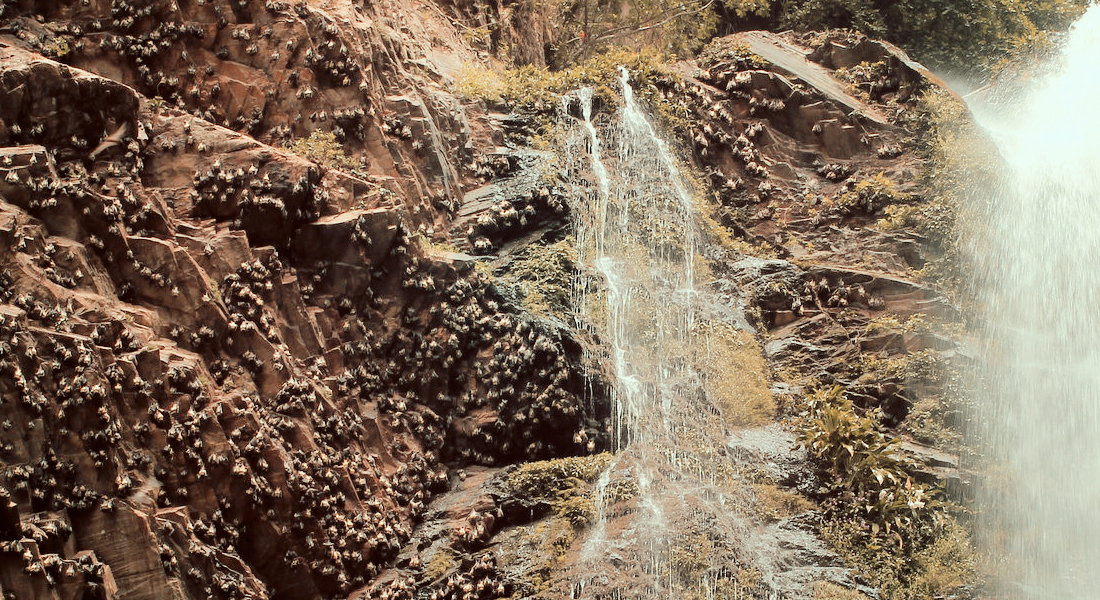 THE WATERFALL DROPS SPECTACULARLY ONTO THE LAKE and can be observed from two wooden hammocks that almost enter the water as if they were airbeds. This is undoubtedly a privileged enclave, where you can let yourself go with the soundtrack of the water, the colour of relaxation and the fumes of winding down. You could spend a few hours here for. On one of the hammocks lies a blonde in a pink T-shirt almost allowing herself to be carried away by the swirl and indeed revelling in the splatters of the falling water, which form what looks like balls of organic fire before being eternally lost to the lake.

The girl has not moved since we arrived. I am envious of her fortunate position and, trying not to make a sound, I slowly settle onto the other hammock, the one to her right. Now I am also lying down, with my eyes closed, truly allowing myself to be whisked away by the harmony of the truth, by the farsightedness of another life that at times I really miss – an unknown life, albeit one I assume to be silent, peaceful, far away and complicit.

Poisonedby the stillness, I later make motions to the guide and, without really wanting to, we set off. Moving along the sidewalk we encounter two guys and a girl. The guys are bare-chested. One of them also walks with a stick and wears a kerchief barely capable of hiding blond, almost ginger, hair. The blond guy approaches and tells us that his friend has been bitten by a lizard.

With a noticeable American accent, he regales us with the story peppered by several “wow, wow” noises. The Ghanaian guide accompanying them calmly says that everything is fine and that nothing will happen to his friend. I add that perhaps the patient, who is now larking about in front of the girl in pink, who remains distant and at rest, will turn into a lizard after a few days. “I wish”, the other girl tells me knowingly.

I move on with my guide and the latter shortly after begins to tell me how hard life is in Ghana. They do not even have enough money to buy schoolbooks, and everything is so overpriced. I, knowing where this is going, tell him that I will give him a few cedis, but that for the time being the best thing to do would be to keep on walking.

Another guide joins us and starts to speak in Ewe with my guide. I head forwards, and that tribal dialogue framed by a superb natural scene, forms a totally African mosaic – the very definition of perfect. Even more perfect when we pass by a half-built cabin, enthroned by several masks that seem to inspire the accompanying guide, who begins to sing. That melody manages to reconcile me with nature’s pleasures and the origins of life.

Upon return to the village once again, the guide takes me to see some ostriches. They approach me, coquettish and friendly. They urinate with unbelievable strength and speed. I take advantage of the show to hand over a few cedis to the guide, who is eternally thankful to me, and after that I begin to walk around the village to browse several stalls selling handicrafts, fabrics, African souvenirs, etc. Here I pinch a Ghanaian child with puffed up cheeks who shakes my hand. A few minutes later, I meet Kwaku once again, who has awaken from what seems like a jolly good nap.

Kwaku and have been sharing out the bananas throughout the journey but we are still hungry. So we park at Hohoe, and Kwaku begins to smile, somewhat nervous. We enter a kind of “house-restaurant”. Kwaku tells me to sit because he will take care of everything. In a restaurant filled with plastic chairs and tables, everyone is eating with their hands in the midst of cheerful chitchat.

I gaze at the kitchen, where a young girl cuts the cassava from behind a grille. Kwaku tells me that he is going to order Banku for me too (a dish made of mashed cassava mixed with corn, swathed in a spicy sauce to which the fish Tilapia and some bay leaves are added). I nod, eager to try a new experience one more time.

When a tall and corpulent lady plants two dishes on the table, I ask Kwaku about the cutlery and he smiles again before inviting me to try the lunch in the traditional manner. I accept, of course, and I watch as Kwaku wets his hands in the sauce and then slides them into the cassava, as if his fingers were meaty tongs that wipe clean the takings. Kwaku is swift and, out of habit, fluidly finishes off the supplies.

Off I go myself, but in a much slower way. I clumsily knead my fingers through the tuberous dough and then in the sauce. I literally lick my fingers several times as I am spilling the lot. The bar clientele, incapable of hiding a smile, murmur. Minutes later, Kwaku spreads himself out on his seat, full and content. I cannot finish off all of the meal, but I leave the place in a happy state of mind. I have tasted the tradition. I have eaten Banku.

AND ONE DAY I WENT TO THE BUSH IN LIBERIA. “IN THE HEART OF BONG COUNTY” (3 of 9)
A night at the Déjà Vu
TRIP TO BUCHANAN (2) of (6) EXPLORING THE CAPITAL OF GRAND BASSA