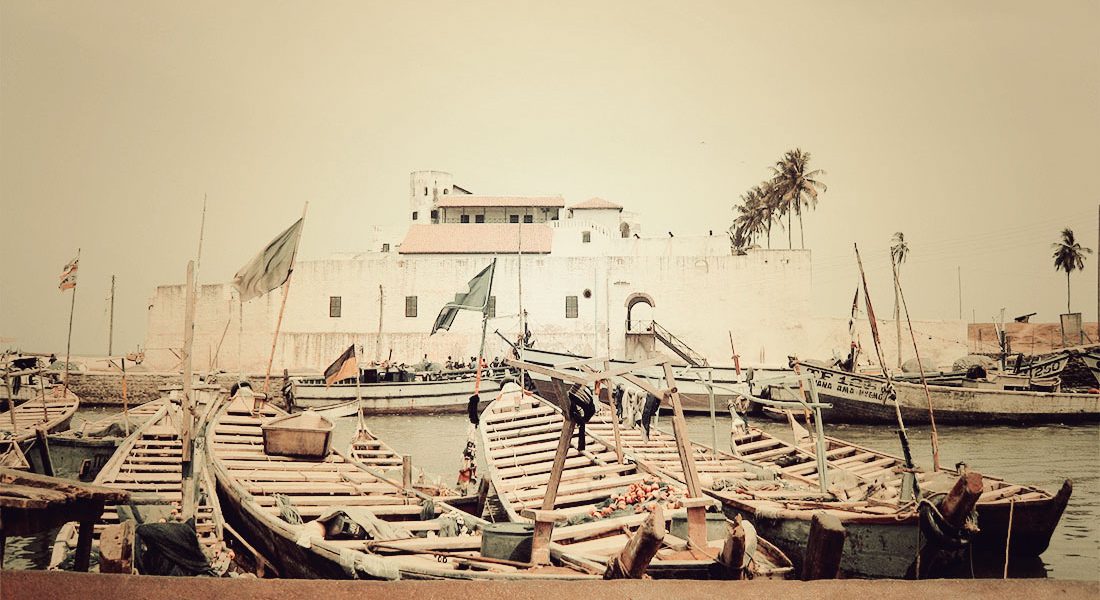 HERE IN CAPE COAST,  GHANA, ALONGSIDE THE CANYONS, WITH THE WAVES BREAKING BEFORE ME, I circle around a bit thinking that in this precise spot one of the greatest crimes against humanity have been committed. I do not know why, but my mind turns to the Count of Montecristo. Well, I guess I am thinking about Dumas’ hero as he was imprisoned in a fort with the same characteristics from which he managed to escape and exact revenge. Indeed, the novel’s Castle of If looks rather a lot like Cape Coast.

During lunch I ask Francis where he is going to eat. The chauffeur tells me “no problem”, but then at a certain point, he smiles with one eye closed, mulling it over, and then adds that he would eat something around and about later. Whilst I do not doubt that a great deal of African drivers would prefer to eat more, I have found out that many of them, many Africans if the truth be told, can go the entire day without eating and drinking and still be on top form. At least apparently.

I approach the restaurant that is located just to the side of Cape Coast. I descend by means of a stairwell carved in the rocks with the sea as my witness to the left, and continue along a passageway that leads to a wooden restaurant. At first I try to enjoy the breeze and for that reason I choose the seat closest to the window, but soon the violent scourge of the wind forces me to move a few rows back.

Meanwhile, behind me, a guy in a blue T-shirt and carrying a bag full of threads shouts at me, “Sir, sir, sir”. I am already quite starving so I do not pay him much heed, even though when I sit down a row further back, I can still hear how he insists, now from the beach.

The lad annoyingly asks me to spell my name to him, and, out of tiredness, I tell him “P-A-U-L”.

After this, I try some yam tatties and jollof rice, which is something along the lines of red rice, similar to, although dissimilar to it at the same time, the Spanish paella. Not too far from me, I spot how the waiters cannot avert their gaze from the soap opera on TV. The star of the show is, by the way, a gorgeous half-cast hunk with a goatee beard.

When I leave the restaurant, the guy in the blue T-shirt once again broaches me and shows me a bracelet with my name embroidered with the colours of Ghana. If I am honest, I really like the look of the bracelet and buy it off him before making haste to Elmina, a village close to Cape Coast, where another important fort is located. As we enter this fishing village, I begin to discover a marvellous city with a crowded market, children playing football, and the sea, the palm trees and, once again, the African local colours, as a backdrop. Indeed, you could quite easily lose yourself in Elmina.

Just after parking, I notice that a group of scamps begin to eye me up. They talk amongst themselves and get ready to surround me as soon as I set foot on their soil. I am really getting tired of all this hassle but cannot help laughing when one who looks like a scoundrel tells me that his name is Michael Jackson. I finally manage to get inside the Elmina Castle – an enormous, white-coloured fort built by the Portuguese in 1482. It was subsequently overtaken by the Dutch and later fell under British control.

Inside the castle, we check out several prisons. In one of them, Europeans were held for getting drunk or for incurring in military indiscipline. There was a window through which food and water were passed to them regularly. But in the cell to the side, there was not even a measly window or a chink of light. Here was where the black slaves, who did not have the right to food or water, were kept. If they died, nobody batted an eyelid.

I take several walks around the castle. The contrast between the religious Portuguese style and the practical Dutch touch is somewhat startling.

I go into another one of the slaves’ “hideouts” and tell the guide that all this history of slavery is not well known in Europe. “No-one cares,” he responds.
“Every year, every day, people remember other atrocities over the world, but nothing is ever said about slavery in Africa,” he states.

Meanwhile, night begins to fall and so I decide to return to Accra. Along the route, it suddenly becomes completely dark. No transitions. Just a shift to utter darkness. It is not easy to reach Accra and, once there, I decide to go to Monsoon for dinner. As is often the case in Africa, the trendiest places are full of white people. And here I am now, at the Monsoon’s terrace opposite Oxford Street.

It seems a world away from the paranoia caused by malaria, and I begin to feel relaxed in the open air. I joke with one of the waitresses and ask them about the teppanyaki or something similar. One of them tells me that, like sushi, it is also Japanese food and beckons me over to see it. Thus, I get out of my seat and find myself amidst one of the cooks and his girlfriend in the full throes of passion.

When he sees me, the guy jumps up like a frog, adjusts his apron and acts like he had been working intensely. I ask him to recommend me something from the menu and the guy slides his finger along the menu, stopping on a dish called Yaki Udon, which is a type of noodles with meat and vegetables. When it is brought to the table, I wolf it down hungrily next to some Germans.

I then discover that teppanyaki is Japanese food though cooked rather than raw, unlike sushi. The lady dressed in immaculate white who has just exited a car in the middle of Oxford Street could also be Japanese.

This beautiful lady is an angel blessed with two ample breasts and a resolute gait. Suddenly, she is surrounded by three guys and she begins to reprimand them for something. She then starts screaming, screaming like a rat. She screams so much that eventually one of the waitresses from Monsoon comes over to exclaim “Helen is here,” and all of the staff perch as best they can to get a view of the show from the terrace. The party is added to by a red car that approaches grazing the thighs of the wondrous Helen, who screams once again before disappearing into a nearby street. It is the night. It is the teppanyaki.

YOU AND I ARE GOING TO DO BIG BUSINESS IN MONROVIA
AND ONE DAY I WENT TO THE BUSH IN LIBERIA (4) of (9) “IT’S FULL OF PIGS. ARRIVAL IN NIMBA”
RECALLING THE PRESIDENTAIL ELECTIONS IN LIBERIA (3 of 5) “BOMI WANTS TO VOTE”