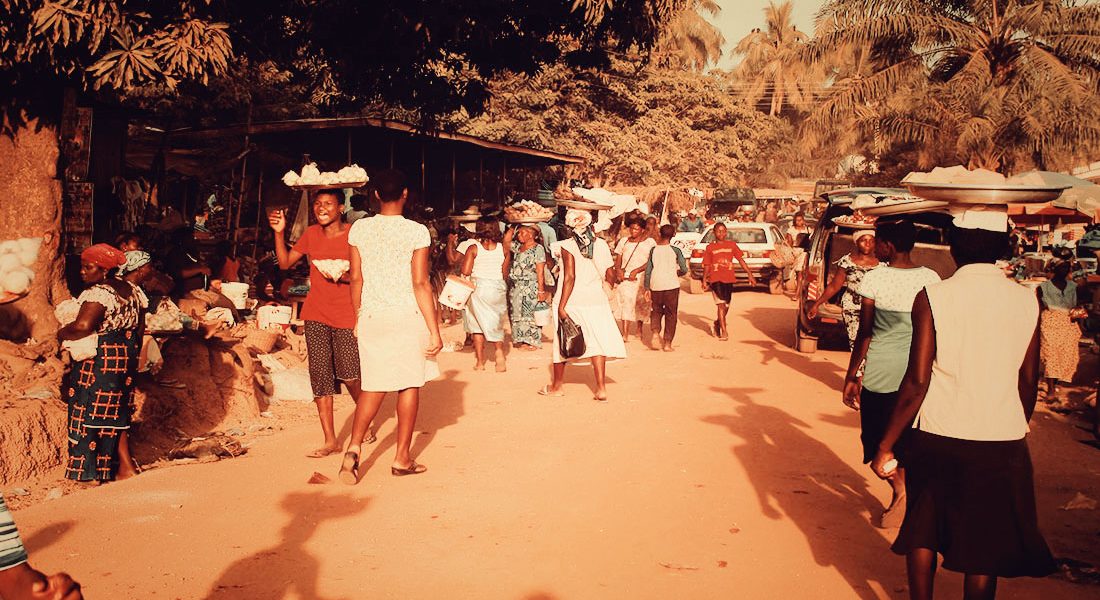 THE TELEPHONE IN MY BEDROOM RINGS AT HALF PAST SIX IN THE MORNING. Irritated, I place the receiver to my ear, and the receptionist tells me that a driver is waiting for me in the lobby. I inform him that I will be ready in an hour, or maybe two, and slip back into my slumber a while more before breakfasting without too much haste.

Later on, I walk towards the hall and in the doorway I meet a strong-looking man who is waiting for me. I give him a glance that tries to convey that “I had no idea you had been waiting all this time for me”. We then shake hands, exchange a few words and then jump inside a brown 4×4 heading towards Eastern Ghana, specifically the Wli Falls and the ape sanctuary at Tafi-Atome.

Along the route, we are both in silence. The previous day, when Francis – that was his name – was driving, neither of us uttered a word, but now that I am here in this car I start to chatter relentlessly, remembering that a writer must always try to learn. Bearing this in mind, I ask the chauffeur where he is from, and Kwaku –that’s his name – tells me that he is from the East, from the Volta region – precisely to where we are heading.

He says he has three children, two girls and a boy, and that all he wants is to give them the best education possible. He also explains that in Ghana it is quite normal for young people, or at least for those who can afford it, to go abroad to study in the United Kingdom, although Kwaku would prefer the United States.

Kwaku supports the NPP (the liberals), yet defends president Atta of the NDC (the socialists) “because he is my president”. I had been told something similar by Comfort about Ellen Johnson, the president of Liberia: she had not voted for her, but defended her as she was her president.

I get the feeling that here, in Western Africa, there is much more respect for politicians and authority than you can find for example in Europe.

Likewise, there does not seem to be such a marked exasperation between the ruling party and the opposition. Their feelings towards the British, the former colonisers of Ghana, is somewhat similar. “We get on fine,” Kwaku tells me. “The British – Kwaku continues – brought independence to Ghana, though in exchange for the assurance of the continuity of the trading links between the two countries. And they managed it.”

We talk, we talk a lot, whilst along the way the classic landscape of banana, plantain and yam plantations unfolds. After a few hours, we reach the Volta region. The landscape gradually becomes greener. More rolling hills hove into view. The mountains appear. After a short while we cross the bridge over the river Volta.

Before us we have the Akosombo dam, a herculean project built under the mandate of ex-president Nkrumah, who was made to depend too much on a North American company named Valco. Even today, doubts have been cast over the profitability of this project. Yet little does this bother the Volta, which flows peacefully and impressively below. We cross over.

We got through a few villages – firstly Ho and later on Hohoe, both filled with African rhythm. Here I leave the car to buy water and I am surprised to see a white girl at the till, serving the customers. When I go to pay, the white girl and I share a strange pause, without knowing what to say to each other.

Livingstone? “Enjoy your day,” she says to me finally. Next, Kwaku takes me to a quiet and green spot of wilderness where it seems like time stands still. I exit the car and enter a little hut inside where two old men wander aimlessly. With a hitherto unseen amount of calmness, one of the old men takes down my details and provides me with a receipt. “Enjoy”, the other old bloke says with a smile.

Outside a guide awaits me. The guide in question is a fifteen-year-old boy who has just awoken from a light nap. We venture into a type of haunted forest full of narrow passes and creeks, heralded by butterflies that hover around to point out the route to us.

We have examples of all colours – orange, white, yellow, etc. Along the route we come across lots of children from a nearby school. All of the girls have their heads shaved, in line with school regulations. For this reason, most of them wear earrings that afford them a delicate, attractive and highly feminine touch.

The boys and girls all greet me and look upon me with curious eyes.

The guide tells me a few words in Ewe, the most commonly spoken language in the area. I ask them ‘how are you?” in Ewe, and they nod their heads or say “yeah”. Yeah, yes, their way of saying “fine”. They also respond by saying “I heard you”. However, I tell the guide that when they respond “I heard you”, they are not responding to the question about how they are.

The guide laughs and continues to walk at a quick pace though with a stilted manner. And I continue to greet the coquette female students and the male clever clogs.

I begin to discover the cocoa tree, the mango tree, the papaya and cotton plants, etc. Then we approach the waterfalls. Under the shade of a group of mango trees a small of chink of light shines through and allows us to behold for the first time this natural miracle that falls from a height of three hundred metres.

We are situated in an angle that shows how the water is sprayed as a result from its violent encounter with the lake, and how brown and fierce, almost infernal, the sprinklings are. And just a few steps further forward, up there, we finally see the Wli waterfall collapse in its colossal fashion, surrounded by bats that guard the source of the fall, the birthplace of the descent. From there, the bats intermingle ceaselessly. It is hard to distinguish them – they seem almost purple, even rusted, and they twerp. The bats twerp so much.