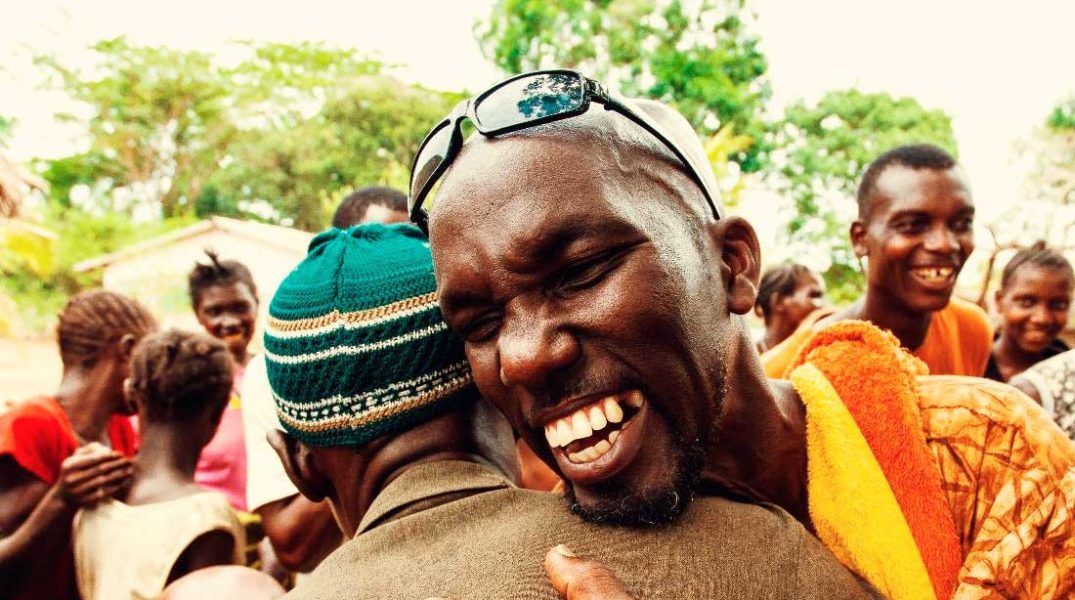 Our football team has won and we’re all celebrating at the Red Lion, under the influence of Club Beers and other natural juices. Like every other day, nightfall is punctual and dictatorial. Waving Flag is playing in the background, waking us all up and making us imagine because dreaming is more difficult.

It has been a long day, brother. In the morning, Walter turned up at my house in his Nissan Pathfinder, with the music blaring. He was beeping his horn and shouting out, “Hey, hey, we are going to win today!” Encouraging the entire Mamba Point neighbourhood. I didn’t take long to leave the house, wearing our team’s football shirt, and got into the car.

Walter shouted out again, “Hey, hey,” and in no time at all, hoards of kids came out of nowhere and surrounded us.  A guy with crutches also came over to us very quickly whilst a guy in a wheelchair began skidding around, and once we were all there, we shouted out loud that today we would win, and they all started jumping and screaming, “Today, we’ll win!” Then Walter turned on the engine, the music blaring with Africa running through his veins. These are those moments, man. Those moments.

We made our way through Monrovia. We forgot all about the half-decent tarmacked wider roads and chose to drive through the suburbs, where people have to solve arbitrary bastard puzzles to find food to eat. I didn’t even know where we were going, because Walter just simply drove. A short while, we later found ourselves on a dirt track of red earth and Walter beeped his horn once again, this time in front of a dilapidated house that must have been colonial and part of Mark Twain’s imagination. From what seemed like an attempt at a balcony, a really tall guy looked out, waving and bouncing and then dancing to the sound of Walter’s music, which he had turned up to the limits of emotion. These are those moments, man, those moments.

Derrick is the name of the guy who is got into the back of the Nissan Pathfinder, bobbing his head and saying that today we’ll win. Because today, we are going to win!

The rucksack. At the Red Lion, surrounded by people and partying, Walter squeezed through to the bar and told the waitress to keep his rucksack in a safe corner. Everyone was jumping up and down because we’ve won, because today we had to win and we’ve won. Soon after the festivities, those of us who are left behind get ready to stay on this trip of emotions, maybe at Déjà Vu. The night owes us an answer.

But just as we were ready to leave, we couldn’t help but hear Walter’s screams from the other side of the bar. Walter is screaming at one of the waitresses, who is impassively wiping down the bar with a cloth. More waiters appear. Now there are two or three, probably four of them. Walter screams at all of them. Some just stare at him, while others move around the bar, looking underneath, moving boxes, taking out clothes, putting glasses down, whatever they can… Others just stare at the rings on their finger knuckles.

Walter repeats that his rucksack has disappeared and that he is sick of all this carry on because it’s not the first time that they have taken the mick in Liberia. “This time I am not joking!” The boss lady of the bar, a very fat and heavy woman with a swollen face, appears and also starts screaming. “Mami, Mami, my rucksack, where is my rucksack, Mami?” Walter interrogates her. But Mami knows nothing, she only knows how to scream even louder than Walter and to top it off, she must have called in her henchmen, because one of them grazed past my shoulder and I noticed that his fits were ready.

“Where is Derrick?” Franky asks all of a sudden.

“Derrick, where is Derrick?” Mami is now raising her hand as if to refer to a very tall guy who was standing near the bar all night. Aha. The news reaches us that Derrick left a while ago. He had to train tomorrow. Derrick is a sportsman. Flipping sportsmen. I don’t know if anyone is wondering whether it was Derrick, but Walter is now making a phone call in the lobby bar, which is surrounded by glass.

I can see his red face from behind the glass. He is sweating profusely; frantically walking about and turning around and around like a spinning top.

It’s quite clear that he is still screaming because every so often he stands on his tiptoes and scrunches up his face, man. Franky and I walk up to him and Walter lets us know that Derrick has the rucksack. Derrick has the rucksack. And so the three of us find ourselves back in the Nissan Pathfinder, now heading back to the sportsman’s address. But it’s dark now, mate, and it’s a different story. But there’s no stopping us now.  There is no stopping us.

Walter’s voice is almost hoarse now. He’s almost out of breath as he informs us that Derrick took his time in answering the phone and that he sounded half asleep when he finally did. His voice revealed his state of sleep, of tranquillity, like someone who has already undraped the bedside table, his blanket, his bed. Walter says that Derrick was surprised to hear from him, and I glanced back at Franky and we gave each other a knowing glance.

It is the middle of the night. The Nissan Pathfinder makes its way through the dark. We are flanked by zinc, silence, and a few timidly surviving lights. We drive on and on, and there, on a corner, unfazed as a millenary oak, stands a long shadow holding something in his right hand, possible a rucksack. It must be Derrick. The car slows down. I start seeing eyes, eyes, and more eyes coming out from the surrounding ramshackle zinc shacks and joining together to become an unpredictable oracle that our brain deems as threatening. These are those moments, man. Those moments.

Walter gets out of the car and slams the door. Franky and I do the same; we want to help, to prove that we are brave, but Walter gets even angrier and tells us to get back into the goddam car. There are many eyes now, many shadows, and I can’t avoid feeling that this is someone who has a score to settle and turns up at the favela to take back what’s theirs, by hook or by crook. But in the favela there are many more, many, many more.

There are many shadows now and I feel surrounded. I can see him: Walter has snatched the rucksack out of Derrick’s hands, and yelled at him, “You and I will speak tomorrow!” (The whole neighbourhood heard, in fact, the whole of Monrovia, the whole of Liberia, the whole of Africa).  And there he is, Walter, coming back to the car with the flipping rucksack, and we’re inside and can’t see a thing from inside the car, just a few shadows and eyes; many, many eyes that seem to be waiting for us.

AND ONE DAY I WENT TO THE BUSH IN LIBERIA (9) of (9) “IT IS HARD TO RETURN TO MONROVIA”
How does it feel to arrive in Liberia, in Africa?
Hi, I am Carlos Battaglini. It is time for me to take off the mask and reveal you a secret