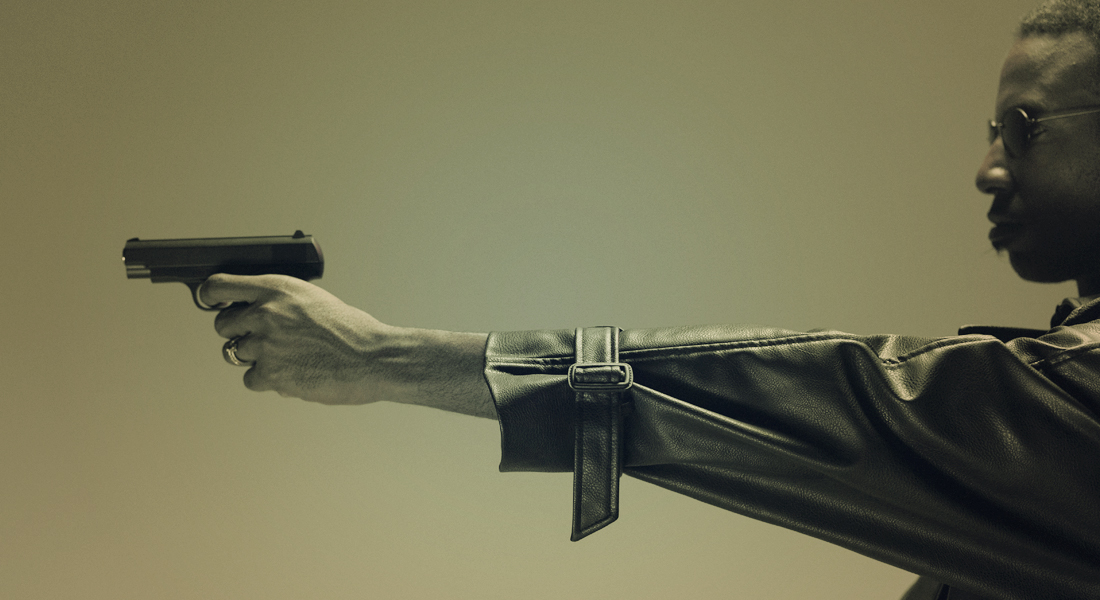 He always starts talking at about quarter past or half past seven in the middle of UN Drive. Actually, he doesn’t talk, but rather screams, shouts, and quite often sings. I listen to him. I see him. I see him every day as soon as I step out into the street. He’s always sitting down, leaning back, sleeping on some kind of cement platform that he seems to have made his own some time ago now. He seems to be posing like a mime artist who stands out, visible at all times, with his Brooklyn cap.

By now I’ve got to know him. I now know that he sits there quietly all day, waiting for the sun to go down once and for all, and that’s when, oh that’s really when he makes his presence known to the world, those are his few minutes of fame, a way of saying: I am here, please, I am here, you bastards!

I confess: at first I would dread having to walk past him. The crazy, vacant gaze in his eyes made him appear unpredictable and mad.

Who knows… and I wondered. That face had probably been woven by war and those eyes had most certainly become imbued with distance to the sound of gunshots… that’s maybe why I would walk by so fast, to get away from him as quickly as possible.

And the cringing.  At first my teeth would cringe every time I saw him there, hunched over and taking shelter as he scoffed a plate of thickly granulated rice mixed with dust, dirt, rubbish and all sorts. There he was, stretching the gullet, fully focused on his plate of rough rice as the bulky grains descended into his venous neck… and after a while, he’d fall asleep. He’d sleep.

Actually, let’s be accurate, he had remained silent for a long time. Days would go by and the truth of the matter is that I had already gotten used to seeing him petrified, lying down in whatever manner he could, taking a few grains of rice to his lips, plunging him into the most secretive impassivity. Everything was silent.

However, slowly but surely, he started waking up and one day he suddenly started singing. But, you know, they were kind of tribal songs, from a clan; sorcerer’s songs that he emitted with his eyes closed while he jumped up and down, or walked forwards and backwards then left and left again.

There was no lack of  admirers, and it didn’t take long for a semicircle to form around the cement platform near Carter Center.

A spontaneous bunch of groupies watched the spectacle with a mixture of interest, resignation and that certain grin. Some old women walking by would often leave their fruit trays on the floor and lean their right hand against the platform’s edge, and then, pay attention now! Then, they would start nodding. They would nod as if they understood that lad, who was now on his knees threatening the unknown heavens or one of those beings from the hereafter that can only take the path of darkness and denial of light. Entering the tunnel.

Shortly after, the admirers would lazily scatter, almost reluctantly, and then the man, the lad, would start looking around, but I am not sure what at. Perhaps he was sick and tired of being lost in a void; maybe he was trying to decipher a neurological code full of impossible traps and suicidal torments. What a thrill, man, what a thrill!

I confess: he still hasn’t looked at me in the eyes. In fact, he has never looked at me. Not even at my back or my shoulder. Even though. Every day, morning and afternoon, I flank him. But listen up. I also don’t look at him most of the time. I set my foot on the street and look ahead. I don’t feel like stopping to watch a spectacle that torments the world. But on other occasions, on my way back, I have almost brushed against the cement platform with my little finger and looked towards the left, turning my head to see him. To take a closer look.

When I do this, when I turn around, when I look at him, he indeed is never looking at me. Never.

I doubt that he even sees me. That he sees anything. I have no idea what this man actually sees. Several times, I have tried to lock glances with that labyrinth that can kill, I swear. But nothing. I have even reached the point of looking back without warning, as if to catch him looking at me, or even just the sole of my feet or some moving point. But no.

He is never looking, he never looks. He remains still, leaning back, miserably eating those grains of rice, waiting for the sun to go down so that he can start singing and reclaiming his place in a void with that shrill voice of a spoiled girl or an inexperienced teacher losing her nerves with that unbearable ginger-haired boy.

The sun has gone down. I am at home now, sitting down. Just as I am opening a book or taking some papaya to my mouth, I hear his hysterical voice interspersed with the sound of motorbike engines. Hours go by, and yet more hours. Of course, I don’t have a clue what he is saying, but still.

“CLIMBING THE MOUNTAIN OF TRUTH IN KINDIA”. CARLOS BATTAGLINI IN GUINEA (4) of (6)
Burning a newspaper. A meeting with Rodney Sieh, director at front page
Trip to Ghana (6 of 7) - What do you need a knife and fork for?