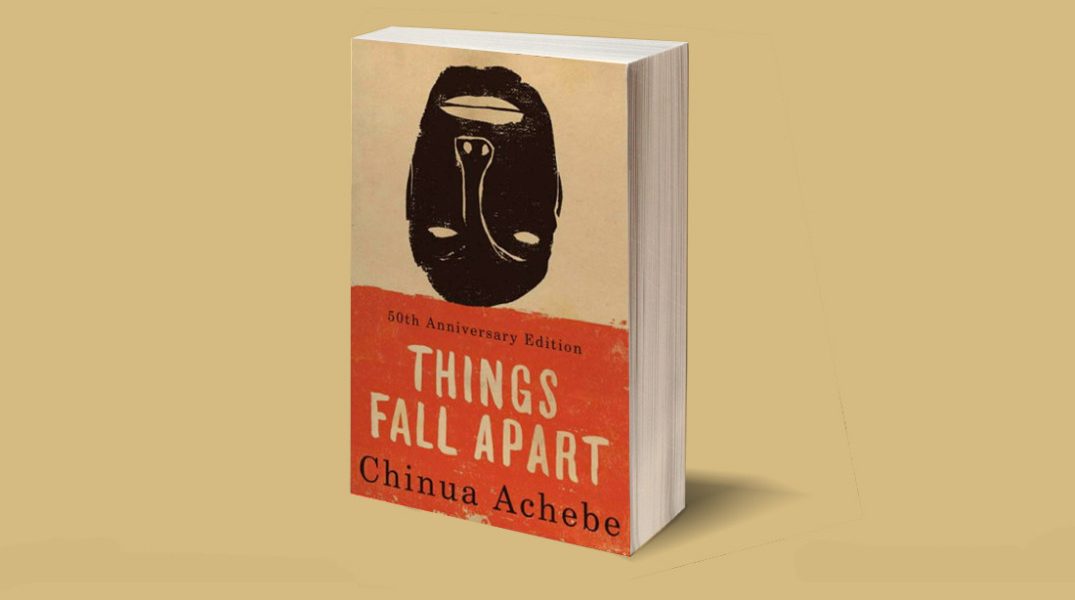 Things Fall Apart is a novel that narrates the story of Okonkwo, an Igbo farmer and warrior who settled in the fictitious village of Umuofia (Nigeria) at some point between 1860 and 1890 (during the pre-colonial era and emergence of colonialism). Okonkwo is scarred by the negative image that he has of his own father: a lazy person who drinks and has no aspirations. Okonkwo is quite the opposite and is very ambitious.

He aspires to become a dignitary in his village and wishes to be well respected in his region. To this end, he works hard on his fields, especially on his yam crops, the main agricultural crop grown in the area.

Okonkwo has many wives (polygamy is part of the Igbo culture), with whom he has many sons. An adopted or “rescued” son, Ikemefuna, has also been welcomed into Okonkwo’s family following an agreement reached after the murder of a resident of Umuofia by neighbouring villagers.

Despite having grown very fond of his adopted son, Okonkwo ends up killing him because the oracles have spoken, and their predictions are written in stone.

Life in Umuofia is a markedly rural life, characterised by chauvinistic machismo and guided by tradition, the spirits and the oracle’s judgements. People are very attached to their land and they use ‘cowries’ (a type of shell) by way of currency (cowries used to be brought from the Indian Ocean and they were later replaced by coins).

Moreover, neighbouring villages do not get along very well and the possibility of war is always looming, which is in stark contrast to its more peaceful past. Okonkwo, obsessed with shedding away his father’s reputation, works very hard but also acts in an arrogant, brusque and bitter manner. He has no qualms for instance in hitting one of his wives if she doesn’t follow his instructions to the letter.

Okonkwo has big projects in mind but an unfortunate incident will unexpectedly stop him in his track. The farmer unintentionally kills a local villager and has to seek exile in another village for seven years, more specifically, his mother’s village. This involuntary retirement makes him lose his influence and time, as well as other people’s trust.

But more significantly, during his absence, there is a totally unexpected yet decisive turn of events: the penetration of Christian religion by means of the white man. To be precise, it is the British who start to colonise Nigeria, a factor that leaves its mark on the region’s future forever. Thus, when Okonkwo returns to Umuofia once the seven years are up, he finds that the village is split between supporters of the traditional religion and the new Christian converts who have progressively joined the new faith.

Nevertheless, Okonkwo tries to continue with his projects and his ambitions, but gradually realises that Christian expansion is increasingly powerful.

Its influence will turn out to be pivotal and cause Okonkwo much frustration, as despite his best efforts to dissuade one of his sons, Nwoye, he joins this new growing wave of converts switching over to the Christian faith. What’s more, the Nigerian farmer feels impotent as he witnesses how most of his peers and fellow citizens of Umuofia remain passive and almost submissive to this new situation, instead of violently reacting against the intruders.

Many citizens in Umuofia possibly thought that their tradition and their Gods would put an end to this rebellion, because among other desecrations, the Christians are using a property that was previously declared as damned, and some of their converts have gone as far as killing the sacred python.

But the truth of the matter is that the Christians are not only doing well (except for some minor mishaps apparently caused indeed by tradition) but they are also rapidly increasing in their numbers and gaining ground. They have more land and infrastructures, especially schools and a government, which are essential elements for guaranteeing the conquest over the land.

Tension is in the air, as followers of the traditional religions and supporters of the christian religion live alongside each other, yet violence is subdued. However, Okonkwo calls everyone to arms and wants to drag as many of the villagers into the battle as he can (he also feels humiliated after having been kidnapped together with other fellow villagers by the Whites and only freed after a large payment of cowries).

So a mass meeting is convened in the village, which Okonkwo is suspicious of. In the middle of the fiery speeches, a contingent of white men appears demanding to put a stop to the revolt. Okonkwo cannot take it any longer and ends up slitting a white man’s throat. Realising that he is practically alone and with no backing, he flees. Shortly after, his body is found hanging from a tree branch: Okonkwo has committed suicide.

THE CHRISTIAN RELIGION IS REVOLUTIONARY. Literary review of Chinua Achebe’s Things Fall Apart (2 of 3)
SHOULD LIBERIA HAVE BEEN AN EXAMPLE FOR THE WORLD? Literary review of Helene Cooper’s ‘The House at Sugar Beach’ (5) of (5)
“Have things changed in Liberia or not?”. A literary review of BLUE CLAY PEOPLE by William Powers (3) of (3)