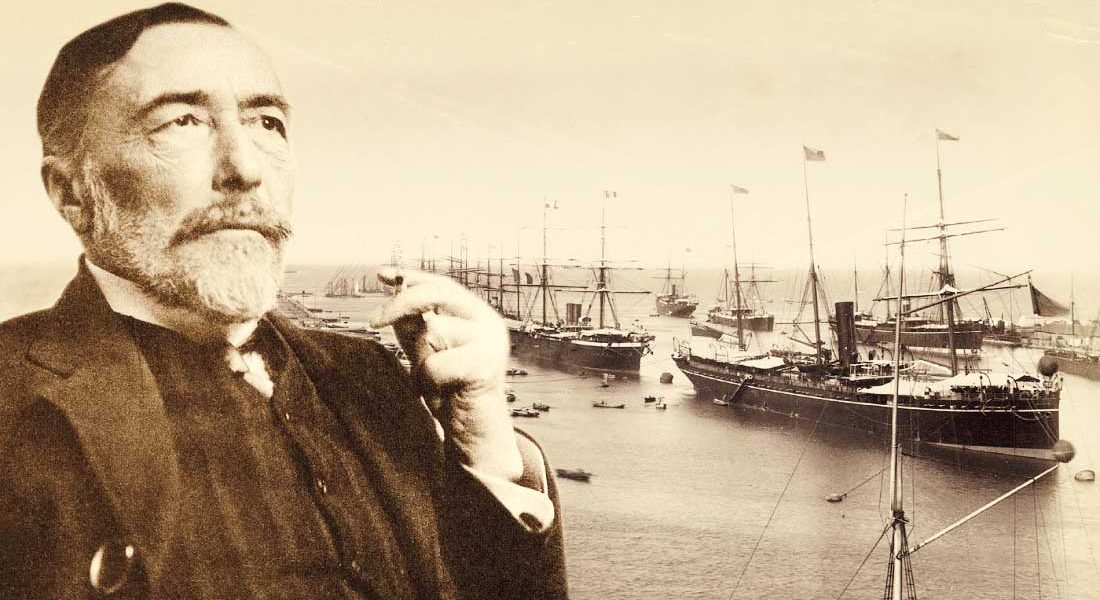 Another aspect that did not convince me in Heart of Darkness is the fact that some characters are named, but then they are not developed nor do they appear later within the story. I am referring to the characters at the beginning, when the ship’s crew is depicted, as they remain moored in London: an accountant, a lawyer, etc.

They simply no longer reappear; all that is mentioned is that they are asleep when Marlow (who can get on your nerves at times) is sharing his story, while others are apparently listening. And that’s that. Even the main characters are not entirely fleshed out.

Regarding the narrator, it is written in first person, but it is an ‘alternated’ first person, if we can call it that way. It is related to the Chinese box that I mentioned in the first half of this review, which is in fact a double Chinese box, as the first narrator is an unnamed sailor, who then describes Marlow who goes on to tell the ‘story’ to the crew.

The narrator, who we then almost forget about, appears much further down the line to tell us that the rest of the crew has either fallen asleep or is still listening to Marlow. That is when things get confusing, as at times there is no clear distinction between the first narrator and Marlow.

I do not find Conrad to be a prodigious writer in terms of technique either. For instance, in my opinion, his character descriptions are too overloaded. They are so baroque that they sometimes end up blurry. It is a known fact that actions are more important, and it is through actions that the reader has to visualise the characters, not through never-ending descriptions.

Regarding the scenery, here too I believe the writing is excessively pompous, considering the over-use of common adjectives and lack of discoveries. But as I said, the entire novel saves face thanks to the sensations. Those sensations.

On the other hand, in defence of Conrad, one must also say that he wrote the book in 1899. Back then travel writing had not matured at all and therefore his book was considered a doorway to exoticism and almost a pioneer in the field. But of course today, although it can be considered a pioneer, the book can hardly be considered exotic or anything close. Indeed, nowadays what with satellite TV, National Geographic, Internet, the globalised world and all the rest, Africa almost doesn’t seem exotic. Of course it still is deep down, but it is no longer remotely as undiscovered as it was in 1899. Given that loss of exoticism, today the novel may lose out in terms of impact.

And speaking of today, what would be considered exotic today? I wonder, what can be defined as exotic when a run-of-the-mill person jets off to China, a plumber chooses Istanbul, an architect has coffee in Mongolia, and business men nonchalantly cross the world the way you would hop on a train from Brussels to Lieges.  Additionally, low-cost airlines in one way or another have stripped the world from exoticism. Indeed, one is left with the feeling that much has been discovered, almost everything has been explored, and the word exoticism therefore needs to be rebuilt. New faraway trails need to be uncovered, new routes, places where hardly anyone goes, if this remains at all possible in our era.

Coming back to Heart of Darkness, it is worth highlighting the very ‘humane’ behaviour towards Kurt’s glory and fall. When Kurtz was powerful, he had admirers and was feared everywhere. He was well respected and revered and had many followers.

Marlow was possibly the only company member who did not feel that kind of admiration for Kurtz. Later, when Kurtz is injured and subsequently dies, the social climbers soon claw their way up the company to take his thrown. Paradoxically, in the end Marlow turns out to be Kurtz’s practically only admirer in the company and the only one to regret his death, even though one should not forget that he was a corrupt murderer.

Marlow’s impressions regarding Kurtz, I would dare say, are somewhat contradictory: Marlow is an honest guy, who knows deep down that Kurtz was a destructive and despicable person, but he also admired him, not only because of his charisma, but because he realises, I believe, that even evil can have its positive shades. Basically, no man is simply ‘evil full stop’. Shades of grey.

Just to share an anecdote, as I was reading the book, it reminded me a lot of the film Apocalypse Now. Marlow reminded me of Martin Sheen and Kurtz of Marlon Brando, so it was to my great surprise that I read in Wikipedia that the film had been inspired by Heart of Darkness (among other books). Some go as far as claiming that it was Coppola’s film that made Heart of Darkness rise to the summit of fame. The writer, Borges used to say that good writers have a great influence not only on the future, but also on the past, and in this case the film served the purpose of rescuing (rescuing or doing justice to?) this novel.

In the end, The Heart of Darkness did not meet my expectations, but it is a novel that persists because it is written with passion, heart and honesty.