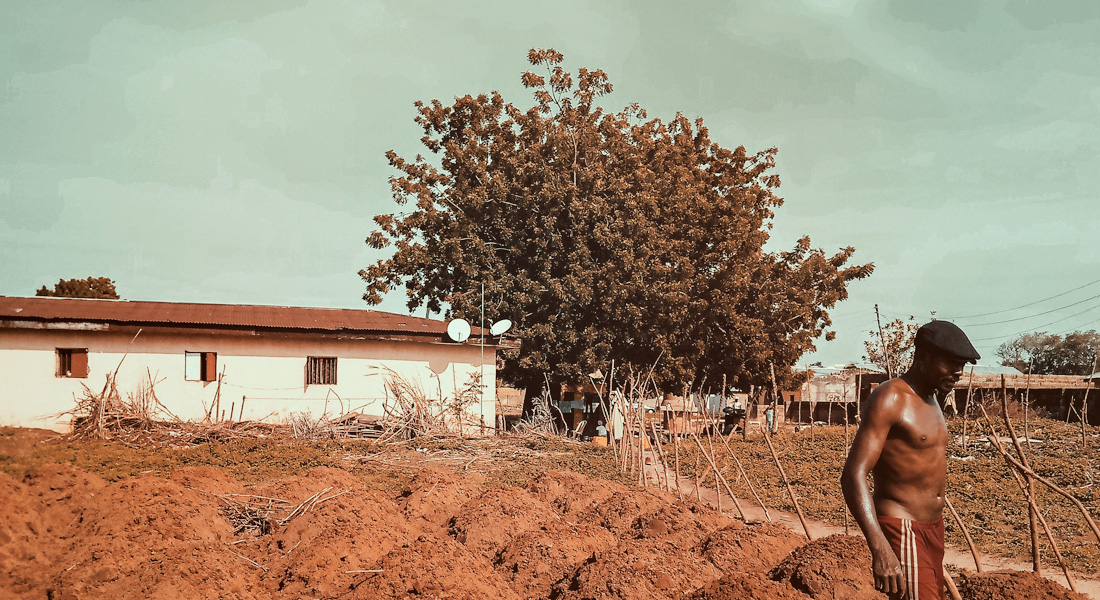 WE LEAVE GBARNGA BEHIND. It hits us that this time we are going for good and we are suddenly overwhelmed with sadness: the green and red has got under our skin by now. But before leaving Gbarnga, we have to attend several institutional appointments in the area.  So we get into the Toyota Land Cruiser and proceed to our meeting with Mr Henry G. Kleene.

He is head of the Ministry of Internal Affairs but also plays an important role in agricultural issues in Bong County, and the capital is precisely Gbarnga. After several mishaps and dead ends, we finally find the building. Inside, the corridors cast many shadows and dark lines, as countless Liberians continuously stream in and out of the offices, making it hard to believe that anyone can concentrate in there.

Rick and I knock at a door. Knock, knock. We spot a man in the far left corner swamped under mountains of paperwork, pens and scattered folders. Mr Kleene jumps up and greets us warmly, clutching onto our wrists and speaking loudly. As I take a seat, I notice that a poster reverberates from the back wall, behind Kleene’s head. The major African leaders gleam like NBA basketballs stars. The poster plays with colours and clothes. Kleene is explaining land-related issues to us, but I can’t keep my eyes off the turquoise and magenta robes and the golden rods that the poster projects. I am enchanted and enthralled by the colours of Guinea Buissau’s flag. Red, green, yellow: come with me.

“We want to produce food for our people,” says Mr Kleene. He fishes out his mobile phone to answer a call with a harsh voice: “I am in meeting, later!” Mr Kleene puts on a friendly voice again and states that he would also like to learn from us. “I would like to learn from you, Carlos” he assures me. I thank him for his words and now turn to the Obama poster hanging in another corner of the room. Through the window on the right one can look out onto the fields: a yellowish green, the colour of cinnamon.

Mr Kleene expounds on some of the challenges faced by the agricultural sector in Bong County mainly related to a lack of funds. He then jots his phone number down on a piece of paper and asks me to call him. “From now on we will be in touch.”

Rick and I get back into the Toyota Land Cruiser, which comes nowhere close to our funny friend, the brown Toyota Hillux. We start to part ways with Gbarnga. But before we leave altogether (oh, those moments just before one leaves) we turn our car to the right and arrive at the premises of CARI, the most important Agricultural Centre in the country.

It’s Friday today, but still, we hope to meet Monica Kheshen, the main agricultural coordinator of Bong County. I look for Monica. We are looking for the most knowledgeable woman on agricultural issues in the whole of Gbarnga. And there she is.

It’s not hard to recognise her from a distance because Monica is a very fat woman, or very strong, as some Liberians would say. Monica reminds me of a soul singer. As we approach her, she gives us that African puckered lip look that on this occasion means, ’what’s up?’.

Here at CARI, the approaching weekend is in the air. The weather is nice and there are many soft drinks around, and the odd barbeque. They have clearly been having a good time before our arrival. Rick introduces me to Monica after having greeted her with the usual familiar nod. She soon starts to mouth off about everyone who she can’t stand in this ‘inner circle’.

At one point, bang, she even steps back gaining momentum with her at least 100 kilos, as if she were about to sing the chorus of one of those dance floor hits, you know man, the big hits that make the whole stadium explode. But instead of singing the song we were all waiting for, Monica lets loose an indiscriminate string of household insults, rounded off by a ’and them over there too.’

I watch her with an inner smile (my stomach and intestines are having fun). I conceal it by handing over some water to the driver, who keeps the whole bottle to himself! That’s the second time this has happened to me with a bottle of water on this trip! It seems that what is borrowed is considered taken.

As I turn to Monica again, who is still ranting in her tirade, I now can’t help but break into a knowing infectious grin that eventually makes her smile as well. She starts to calm down and to elucidate a little better their every need, their every want.

As per usual, they ask, they ask me for all sorts, and as always, I make a gesture or two… And then, all of a sudden, bang, Monica is almost shouting at us now that she has to leave, to help ourselves to a drink. Within a split second, we see her leave and then sitting in the front of a jeep, carnally standing out against the land, the buildings, the fields. Off she goes.

Now there is no excuse for us to leave ’the field‘, or however we may wish to call it. The time has really come now and we get back into the Toyota Land Cruiser, which mercilessly abandons CARI and Gbarnga.

I say goodbye to Gbarnga as I jump around from the potholes. Rick is in the front and also bopping uncomfortably as the driver doesn’t hesitate to put his foot down on the accelerator, dipping into every pothole as if he meant to.

Rick looks rather pale sitting in the front. I can hear his heavy sighs as he realises that the boomerang of his hard life is going to come back with a blow in Monrovia. Solitude. We are heading to Monrovia now. On the way, we see some cars doing foolish things on the road.

A jeep overtakes us at full speed, letting out all the junk in the world from its exhaust pipe! Then we overtake a lorry full of people hanging from all parts of the vehicle!. So we are returning (returning, returning) to Monrovia, feeling refreshed and pondering whether I have contracted malaria, but happy to have had some fresh air.  I am returning.

As we get close to the outskirts of Monrovia, the driver gets out at Paynesville, amid the market chaos, in the middle of many crooks, in the middle of an albino woman with bushy hair, in the middle of people that move in all directions except for straight ahead. Rick is now driving so I have moved to the front seat. Rick also puts his foot down (that’s all I needed), and because he is not used to driving in Monrovia he constantly has to honk over the top.

I was told that upon returning from a field visit, I would be tired, I would be dead. But the truth is, that as I get out of the car at my compound at Mamba Point, I am overcome by a shrewd vitality, aware perhaps of having had a once in a lifetime experience. I offer Rick a Savanna and he agrees nodding. He arches his eyebrows as his discovers Thus spoke Zarathrusta by Nietzsche among my books. “What is Nietzsche doing in Liberia?” I don’t know, I think to myself. All I know is that I can now say that I have been to a place called jungle, rainforest, forest, wilderness, luxuriant foliage or tree grove? I stare at the ceiling, saying, “I know that I’ve been there.”

THERE IS A DEAD MAN ON MY STREET
Chess in Liberia! I am a white bishop in this country
IF YOU COME TO LIBERIA FOR SCRAP METAL…