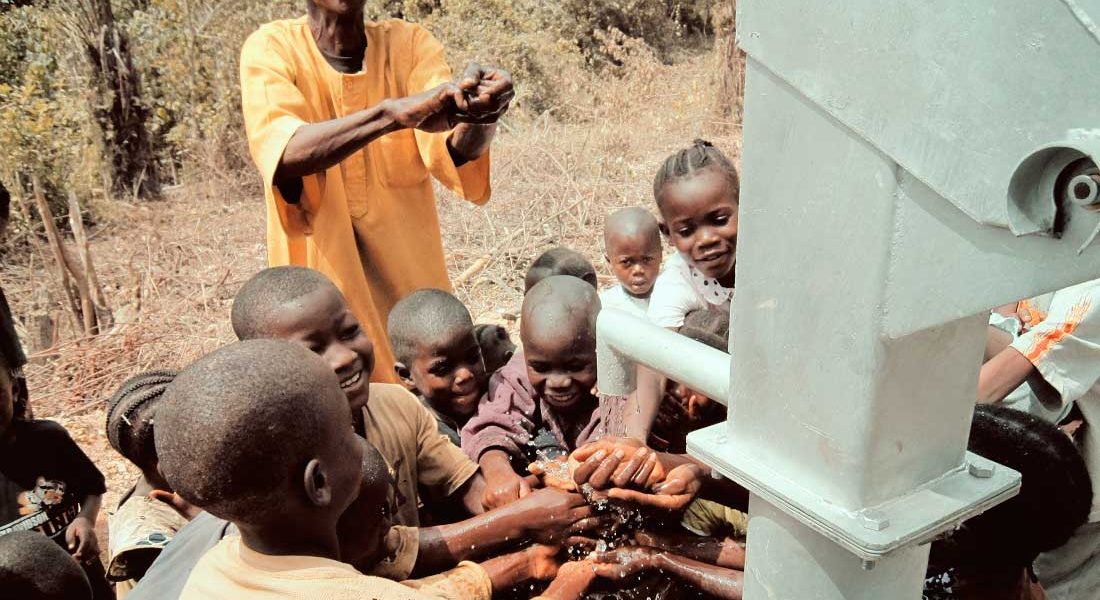 IT’S HERE. Rick comes to fetch me in the morning at the Hilltop Hotel in Gbarnga and we get into the Toyota Land Cruiser. Vroom, vroom. We set off for the compound of the last NGO, which I have come to visit.  It’s a whole different matter with Rick, let’s say that we are talking about a highly experienced man who has spent many hours in the ‘field’: he knows how to take the reins. An enormous pine tree towers over the NGO’s compound, reaching high above the mango tree that sits beside it.

So then. We walk into the compound and Rick shows me the way to a room where I find seven or eight young people gaping at me, some more gawkishly than others. Rick introduces me, I say a few words, and after my final thank you, it’s their turn to describe their functions. The shortest one is the last one to introduce himself and once he has packed up his laptop, we all set off together. We’re off to see more projects.

The expedition consists of two Toyota Land Cruisers that arrive into the village of Dementa in no time at all. As soon as we get out of car, a woman comes up to us. I greet her with a click of the fingers (a snapping of fingers to say hello in Liberia), to which she reacts with a: “Very good, African way!”

She makes a hand gesture to follow her into a large room full of women who are eager for us to sit down so that they can sing in our honour. The women welcome us with their singing, Rick and I are there, sitting behind an oval table with other people from the NGO.

It’s moving. There are many women of all ages, mostly plump and clad in their long bright colourful cotton dresses. The Liberian members of the NGO shift their body language and adopt a knowing expression, as if to say, “This is my country.”

Having finished singing their songs, several women put a rather heavy looking safe on the table. A lock ensures that no one can get their hands in. The group’s leader, a woman with a powerful voice, explains the initiative: “This is where we keep our savings and at the end of month we always receive some interest.”

The woman particularly stresses the words as she says: “This is ours.” The other women assent in unison with a: “Yessummm.” This is the power of microcredit, the project’s main objective.

As we leave the building, the girls at the NGO take us to see the vegetable gardens financed by the project, where you can find all sorts; lettuces, aubergines, melons… the women strut up and down like peacocks, proud owners of the crops.

Colourful costumes with flowery patterns coexist, side by side with Chelsea and Barcelona football t-shirts that can be seen hanging on pieces of strings from the mango and palm trees. We walk around the plantations a few more times and then say our goodbyes as they warmly wave at us.

We arrive in Franjoe, where we are received with more singing. At the next village, Deanville, as soon as we get out of the car, an angry man in a black t-shirt comes up to say: “All of these projects are for the women. What about the men? I also want to join in.” And as always, I more or less assent, saying: “Yes, but…anyways.” The prettiest girl from the NGO shows me all of the planted land at Deanville. Again, there is a lot of lettuce, aubergines, melons. Earth.

Rick is also around and is accompanied by other NGO staff who are supervising several workers beside their crops. Occasionally he stops to pinch a dog’s muzzle. Women from the village start appearing from everywhere as if it were the perfect ambush. We are surrounded, and after a click of the fingers, they drop their head in prayer. Let’s pray. Silence, pray, pray. Let’s all pray.

As I soak in the bucolic surroundings, I look towards the adjoining fields as they multiply into innuendos and utopias. For a second, once again I feel like leaving everything behind and walking across the fields, cutting across the paths, blending in with the crops and occasionally stopping to rest amidst the flowers and the plants. Just to stop for an instant, a moment, a few minutes, an hour, thirty seven seconds.

I go deeper, losing myself in chlorophyllic reveries, in Carmina Burana and its derivatives, until I see Rick once again, asking me how it’s going. He says it’s time to go. We are always leaving. I am always leaving. Somewhere else, a new frontier, and so on and on.

We arrive in Vielanai and I cannot help but feel great. Feeling great. Vielanai is a tiny village overrun by cocoa and flamboyant trees and by yellow and pink dresses… A breeze is blowing from a sea that does not exist. And even though you can’t hear the sea, you can kind of hear the sea.

And as you hear the waves, you set your eyes on the onions, the tomatoes, the beautiful girl from the NGO, some guy who has come out of his hut with a suspicious look on his face, almost ready to kill. That’s what you notice, as you listen to the sea.

Some of the NGO members are already quite tired and they have scattered around the village, like survivors of a bloody battle in agony.  I stay listening closely to several guys explaining the ins and outs of the plantations and other stories of hope.

I stand sideways to make the most of the breeze, to let it brush against my neck, into my left ear, and down my left shoulder. I can’t even tell if it’s a breeze, if it’s just me, the sea or goodness knows what – it must be the cockade effect this village has on me what with the rustle of pink dresses, or maybe there is more to it.

TRIP TO GHANA (5 of 7) - BATS AROUND A WATERFALL
I AM LIBERIAN AND I ALSO WISH TO FLY
There is more life than compounds, offices and dinner parties