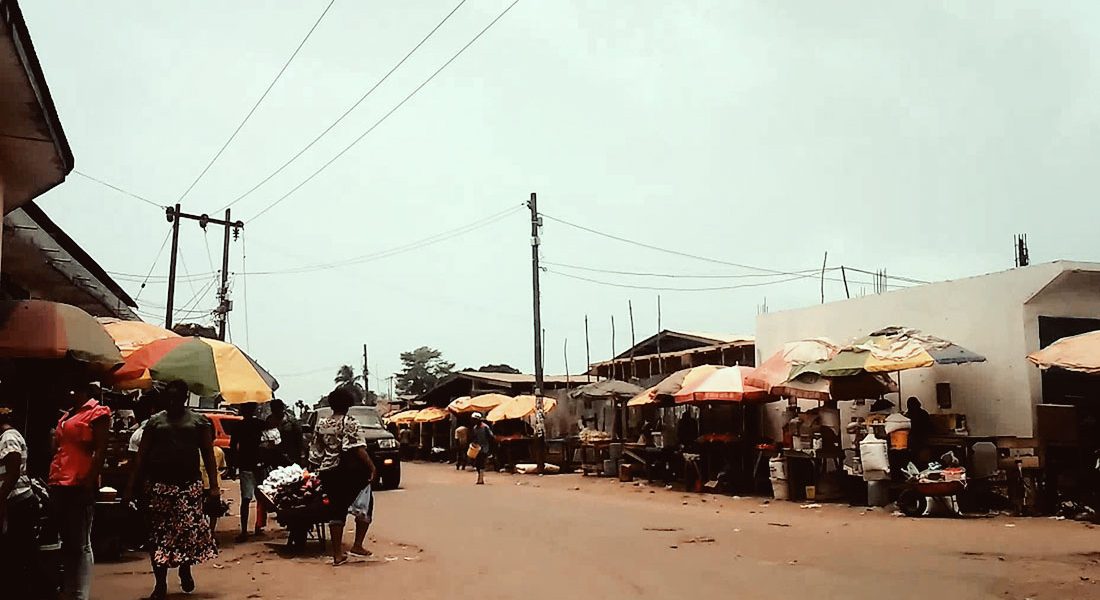 These are the hardest days. Those days when you sit in front of the computer and you don’t know what to write about. You can see it, too. A blank, white screen boasting only a title, that only says “test”. Not a single word more. I swear I have tried. I’ve gone back over the Liberian newspapers, I’ve taken a look at my notes, I have visualised various experiential catalogues in my brain.

And I still don’t feel like writing today. Like so many days. I don’t like writing. There is no one topic that I really feel like expanding on, delving into, stretching my aquatic arms under a celestial sea. Honestly, I could choose between many stories and simply tell one of them. But that is when a memory falls like a stone: the sentence by a North American writer (I forget his name, though he was young, had blue eyes and he admired Dickens) who said, “always write about what excites you”, what you really feel like.

For this reason, I won’t speak about the destruction of the landscape, of the denial of the sea to which it is subjected the Liberian capital, where I have been living for some time. Yes, there is sea. There are nights when I can hear it. The tide. It is a sea somewhere in between dangerous and greyish that we can’t even see. We know that it is on the other side.

After rows and rows of compounds, rows and rows of shacks. The court of patience declared that the sea had been hidden and ignored for some time in Monrovia. Grip the steering wheel now. I’ll explain it better to you: you can be driving for minutes and minutes in Monrovia. An hour. Time. And only in certain capricious stretches (to your left) you discover a slice of beach, an insinuation, a little yellow sand, an overflowing sea that ends up vomiting disgruntled on the shore.

A sea that not only rejects the urban views (everything happens on the other side, the other side) but also watches impotently the plundering of sand that many people have been subjecting the beach to for years. Armed with spades, the locals fill wheelbarrow after wheelbarrow of sand, which they take somewhere to sell, to build the house of some aristocrat, someone important who aspires to perform a political role, surround himself with mobile phones and beautiful women and drive a white Porsche. Before the kidnapping of the sand, the sea will exasperate further, and end up invading the first, second and third line of the beach, causing havoc in the defenceless shanty towns that suffer even more when the rainy season arrives.

There, close to the Mesurado River, near the beach, we know that the sea will penetrate into the very last dingy room of the shacks, destroying precarious huts and smiles in its path. The floods will hit Monrovia, calling on climate change and other surprises that life has in store for us. The issue is simple: you have to destroy the landscape of Monrovia.

The idea is straightforward: you have to strangle the beauty, disrupt a beautiful day, murder the aesthetic, lower the final curtain, kick the view, put everything through a sieve and toss it with a storm of ideas over the coastline. Only there the so-called chance will present itself, the most disorderly combinatorial setting possible, without rhyme or reason. Although there will always be music. And the desire to jump. And all of that.

So there isn’t even an avenue, nor a little promenade that you can walk down, and enjoy the sea, the beach. No. One must put one foot here, one foot there, avoid stones, bushes, chunks of formless wood, confused cement, jump again and bypass people who ask you to participate in ambiguous business, and then arrive bourgeois finally at the beach where you feel watched and tired, to rest a foot on the wet sand that can’t even spread out, so consumed now by the proximity of the shacks, the raging attacks from the sea, the shovels, the wheelbarrows. Here I am, at the beach. In front of the Monrovian sea. So uncomfortable. So out of place. Today. At eight o’clock in the morning.

And I’m not sure if all of this bothers me. I guess that I am used to the beach, the sea, what you see there, on the other side, that is completely ignored, concealed, when it is not destroyed. In its place, I have already said, the cement and the show happens daily, the people here and there, transiting at a rhythm. A rhythm that I would like to understand, decipher. But no, I go on, I go on captured by my traditional brain, my customs, my christening, and all of that.

I don’t know if I felt like writing today about the destruction of the landscape in Monrovia, but it seems I have shared something about it. The curious thing about Monrovia, Cleveland and other cities where apparently there is nothing, is that they can’t stop the light from shining. It’s the same problem that so many cities suffer from: they can’t destroy the beauty.

Because the beauty turns like a chess player desperate in the rush for time, (sacrificing the bishop for the rook right now) like a rat cornered which rises and moves its claws in agony, in a defensive position, like a gladiator who kisses the sand below him trusting that Caesar will give him another chance, when all that is left is to hear the Italian anthem and to leave and die.

It is really agonising to discover that the underestimated nothing, that the suspicious waste and the surprising rubbish and everything ugly, are really beautiful, keepers of unsuspected virtues that only curious and open eyes can see. Desolation had its panache.

And so on. We will spend our summers in barren plains instead of beaches, sunbathing in the plains full of stones and desperation, drinking an aperitif full of fever, drowned in sweat, we will take advantage of the torrential rain to go for a walk and hold hands in the debris, we will be really hungry and it will be the perfect time to get angry and kick the dirt, splashing a hopeful mouse, we will believe that we want to cry yet it will be sixty seconds of laughter and singing, we will think that we are going about it badly and then applaud loudly next to a child surrounded by flies, we will consider disappearing from everything once and for all but then kneeling, oh no, we will be able, to hear the sea. A superb sea, horse, colossal and declaring: “Ladies and gentleman, the light of Liberia stays with us”. She continues here.

There is more life than compounds, offices and dinner parties
IMPRESSIONS FROM THE WHITE WORLD