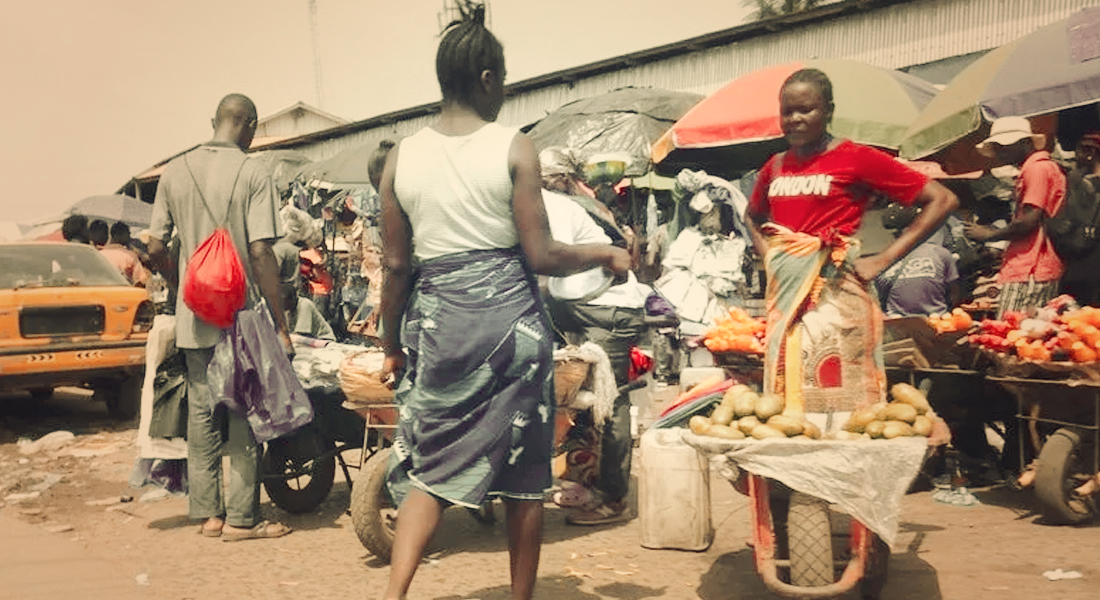 RUN. RUN. When we ran in Monrovia in among the shacks, trampling the earth and the sand, dodging dilapidated huts, I would brush against the zinc ceilings that were caving in. Sometimes I would stop and a bunch of kids would smile. One of them would mimic my steps on a rock, hip hop, hip hop, and then would join the group.

We would continue sidestepping the poverty, transported in our white bodies, moving onward, moving forward and, suddenly, we would step one foot and then the other into a capsule of silence. It’s not possible, here there was only sand, chunks of mottled wood, phenomenal, impenetrable peace. To die here in Monrovia. Of complete peace, of anesthetized silence. Fall on your back.

I turn around I see turquoise coloured houses, the sky is salmon. I see another house with two floors. Its balconies are black, grey, levelled out by an invisible yet fleshy spatula. Someone has thrown up on the walls, giving them a primitive complexion, provoking an indigestion of colours, a saving grace. We keep running. And the music comes to us. I think I have to stop and drink in all of this music. I’m a little tired, you know? Emotion seeks its chance.

We hear a heartfelt gospel, profound hymns and after a minute the voice of a rapper cuts in inviting us to jump and to discover. A mix of music. How is such energy possible? Drunk on life, longing to know, longing to know, we spill out onto the beach. This is simply too much. For the Liberian who is leading our group, it’s not necessary to understand the world, just to move forward.

An azure ocean greets us, a breeze, palm trees, all the colours, all the emotion. And, when I hear them, I bond with them. I bond with the Liberians. I see them as a fragment of a dream that they don’t even know they are part of. They just are. Living. I want to melt into the landscape, words.

I pay attention to the women. Some of them have orange lenses, feline projections that contribute to the dreamlike drink that I have been sipping for some time, a shot of raspberries, piña colada and coconut that it seems I am injecting into myself in some place in Monrovia.

And like a good drug addict, like a responsible drug addict, I comply and I also ask myself one day, full of sadness, melancholy, how it is possible that I have become hooked on Liberia, on Africa. It is absurd. It’s a hard drug that doesn’t need velvet, performance, a metro, a ferris wheel or a miserable waiter. It’s much bigger than that, brother.

And I just can’t take any more. We’re talking about a deceitful, stupid drug, which plays at stopping time, a stop in time. And the memories of America come, of the old Europe, where things supposedly happen. This ethnocentrism just sounds so stupid. How could I have become hooked on such a drug, that I am so tired of? At times. Gimme more. Gimme more.

When it is night-time and we go to Lila Brown, all the guys from the neighbourhood accost me, greeting me with one hand, “Carlos, Carlos” and extending the other, reminding me that I should fork out some money. Some of them seem on the brink of crying. It’s not even night-time yet. It’s something else. It’s a burst of blue, grey, violet, flooded with little lights, white cars that frighten me and little black heads that come and go, overseeing the entrance at Lila Brown.

I will be hooked on this drug all my life. And there is nothing I can do. It will follow me when I leave Liberia, the African continent, and it will harass me in Chicago, London, Barcelona, where I will say that there was once a time when I was in Liberia when I felt calm, where I could walk the streets as though I were seven metres tall. Monrovia was mine, the closeness of it, a familiar feeling. All of that, was true.

Will it happen to me on the metro? In the cinema? In a disco in Queens? I will be jonesing, get excruciating withdrawal symptoms, I will ask myself again, but wasn’t this the centre of the world? And someone will say to me that I seem a little sad, and this little comment will bother me and I will say that no, everything is fine, don’t worry, meanwhile my head is already recalling the night-time parades in Monrovia, those nights when time had been cruelly murdered, had its throat slit, where the space was a mockery, and where one was simply a star searching for more stars. On empty highways, on an opportune stage, to the sound of music whose energy swells. Let’s go.

How could I not get hooked? How could I not lose yourself? In New York I’ll tell them I want to go back home now. They’ll look at me strangely. Look, it’s November, it’s cold here, very cold. And when a formidable taxi leaves me in some London street, perhaps Lexham Gardens, I’ll climb up the stairs and go into that Parisian hotel in the Place de Clichy and I’ll fall onto the bed, take off my clothes and start to toss and turn, rubbing up against the sheets, jumping, screaming like someone possessed, trapped in a state of unavoidable, definitive and endless cold turkey that answers to only one name: Liberia.