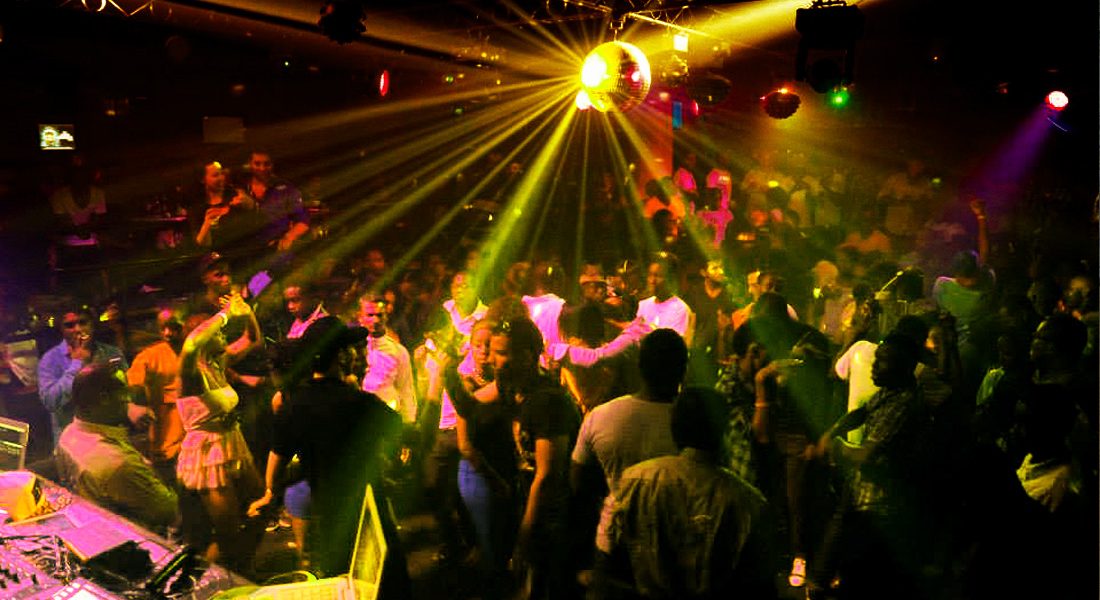 “We are going out tonight,” says François as he grabs onto my arm at the Sajj. I gulped down one more Club beer and felt apprehensively ready to hit the night in Liberia. “They’re going to throw themselves at you,” Hans warns me.

And here we go. We find ourselves in a Nissan Pathfinder, the music blurting out and François is driving and singing, shouting even louder as he gets to the chorus, “Wahala dey, wahala dey,” thrusting his head back and forth. More and more people of all colours climb into the car and it feels like folly on wheels. “Come on people, come on.”

François keeps repeating on this abandoned night, yet there seems to be lacking what every night of this kind usually has to offer: stimulation.  The feeling that something can happen. That you can say hello to the unknown. “Come on people, move it, come on!”…“Wahala dey!”

We arrive at Déjà Vu and goodness knows how many people get out of the Nissan Pathfinder. The cabin from the Marx Brother’s movie would take in this Monrovian night. The fact that we can get into these places without paying has to do with an illogical cluster of factors, such as belonging to the ‘international community’, having been born with a certain skin colour, aha my friend, and, as is the case pretty much everywhere, the gift of the gab.

That’s why the entire gang is now surrounding the Indian at the entrance of the Déja Vu, who wants to make us pay a sum that seems disproportionate (or does it?). Some are waving about a ridiculous little card trying to remind him that they work for such and such a cool place, while others lean on one of the Indian’s shoulders trying to exert a little pressure.

Yet, he remains unstirred as he flicks through a pile of entrance tickets that some have already started paying for. “Guys, guys,” says François as he makes his way through the crowd to sweet talk the Indian who keeps up his hard negotiations with that unavoidable grin on his face, the way you would grin at any rascal of the night.

François insists, as he recalls night battles, past weekends, favours that they supposedly did for each other some time ago and shortly after, a big guy finally opens the door to the Déjà Vu. The nightclub.

“You’re the fucking best,” I say to François and I shake his hand before walking through into a small nightclub with blue tiles, dominated by a dance floor under a turning disco ball.

After ordering a Club beer, it soon hits me that I have become rather bored with venues such as this. I start wandering around the disco, walking from one side to the other without wanting to go down onto the dance floor where François has already cornered a blonde. Some weird people who came with us in the 4×4 start to trickle into an absurd and ludicrous VIP room.

They vehemently ignore the lukewarm orders given by guards who soon give up as they barge in. There are people jumping on the dance floor, thump, thump, as a girl walks up to me and says she is from here, and her name is…what was her name again? She’s very big; she almost looks like an inflatable doll and she holds up a beer at the height of her two plastic hemispheres.

I can’t hear what she is saying against the backdrop of the ‘angelical’ noise in the nightclub. She gets even closer to me when I say that I can’t hear and I can smell the scent of night on her, you know man, I can smell that scent of night. So I mince my words and say, “See you around.” And flee back to my senseless wandering.

I am sick and tired of nightclubs, brother.

I don’t want any more binge drinking, or anything else that reminds me of ‘Plaza Santa Ana’ in Madrid. For instances. All these thoughts are going through my mind as I revel in the dark side and swim around and around in a void, entertaining myself with off-putting thoughts, corroborating my opinion on these types of places and piling on the agony.

When suddenly, I find myself face-to-face, point blank with a voice that says, “I’ve seen you around Mamba Point, I know you.”

I look at her. It’s true, it hits me. I come out of my cold stupor and I am actually speaking, speaking to a person. I make peace with mankind but I don’t even know what I am saying. I look towards the dance floor and realise that it’s simply a matter of wanting.

However, it comes as a surprise to realise that François is shaking his head at me, all the way from down there, the home of all desire. Two ladies encircle him, but I can decipher that he is clearly saying no. I shrug my shoulders, I don’t know what he’s going on about, and as I try to flee from that face that is instinctively following me, François comes up to tell me to steer clear of that woman. “Be careful,” chips in the inflatable girl who has also come closer.

Later on, as the colour is drained away from the night, we make our way back in François’ Nissan Pathfinder playing a somewhat slower pace of music. Of course, there are even more people in the car. François lets me know that he had wanted to warn me that the woman is known for her niceties.

Among other things, she stole a pair of glasses from a Bolivian friend of his and then asked him for five hundred bucks to get them back. “My mate couldn’t see a thing, so he had no choice but to pay up.” Other interesting achievements on the CV of that face that “stuck to me” include having tried to gash another woman with a bottleneck.  And a long etcetera.

All of this is just so nice.

But the word etcetera is not so nice. It’s almost vulgar.

I kept on seeing that woman around Mamba Point. During the first days after our night encounter, she would shout at me in a chesty raspy voice: “Carlos, Carlos, you are….” She would shriek the most shrilling reproaches in the middle of the street.

And under this bombardment of vulgar insults, I cracked up with laughter and just couldn’t stop laughing. It was so much fun to be under constant attack from all angles, all positions, from infantry, the navy and the bombers…

“Carlos, Carlos, you are…” I would piss myself laughing.

Faced with such a friendly reaction to an inveterate attack, the beast slowly calmed down, turning to a meagre, “I don’t want to know anything about you.” To a, “Hey”, and then on to a, “How are you doing,” and lastly, a smile. And on and on. We started smiling at each other whenever our paths crossed. And when we did, all the witnesses who would stop to see such a miracle would break into a big smile in unison.

I often see her, I see her quite a lot. Well, in fact, we are almost neighbours. I always greet her with a Hello, but… and go my way. I hate it when people greet me with Hello, but… I sometimes see her at the Mamba Point Hotel, trying to catch a businessman out, some rosy-cheeked middle-aged man with a wad of notes in his wallet.

More recently she has been wearing an enormous wig that covers her forehead and ears that makes her look like a hungry animal. She sometimes sits under a multicolour parasol, staring at the street, like a lioness looking out to the horizon to see when she can strike.

Last night on my way home, I saw how she dragged herself out of Mamba Point Hotel, almost as if she’d been tossed out like a bucket of dirty water. She wasn’t even wearing a bra, and it wasn’t hard to make out her tiny sad breasts. She grabbed onto my arm in despair and said, almost in tears: “Carlos, Carlos, I wanna beer.”  I took a step back from her, and once again, I said that I’d see her around. As I was getting home, all I could think was how sad all of this is, how all of this can actually be a big lump of shit.

"A TRIP TO THE MOST SINGULAR COUNTRY IN AFRICA”. CARLOS BATTAGLINI IN GUINEA" (1) OF (6)
TRIP TO BUCHANAN (6) of (6) LAST DAY IN BUCHANAN
HAPPINESS DOES NOT LEAD TO HAPPINESS