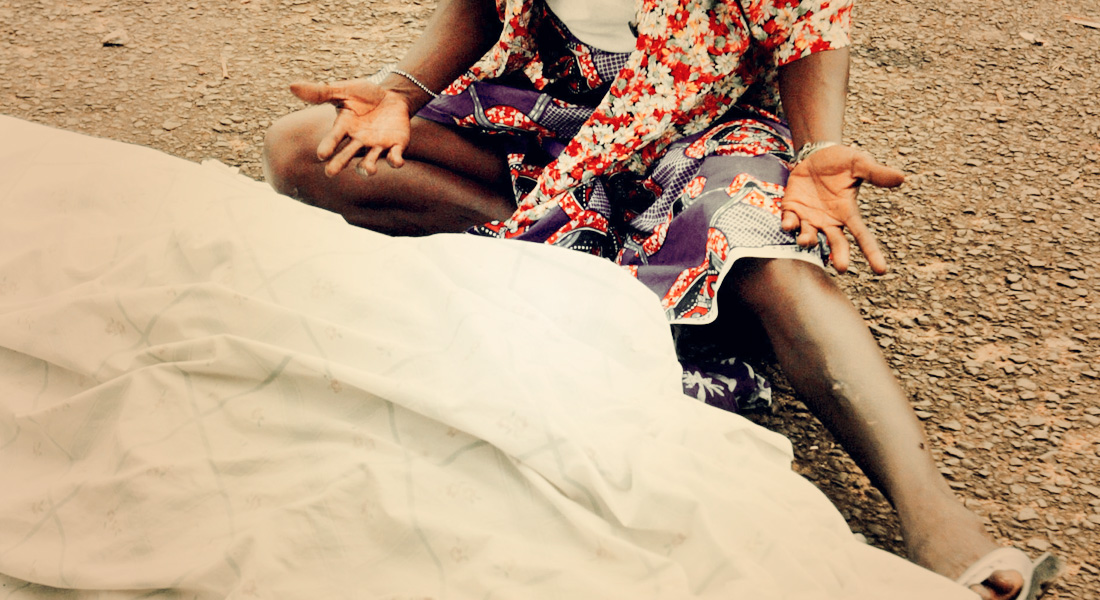 AT FIRST I THOUGHT THAT THE BODY THAT LAY THERE MUST BE THAT WOMAN WHO LOVES THE GENERATOR. That woman who usually spends the whole day stuck to the powerful diesel engine that spurts out burnt smoke into her face. And warmth into her soul. Warmth. That woman who almost always ends up fast asleep in her rags after enduring a long night of spasms, after screaming her heart out or telling the door and the wall that she is not afraid, that they should get it by now. She is not afraid.

I took a closer look.  Could it be her? From the doorway of my house in Mamba Point I could see a body clothed in white and turquoise and a deserted stretched-out hand, a hand that has forgotten to rest.
At long last I decided to slowly walk up and realised that it was a man. Actually, he just looked like all those other men who sometimes wake up here, yet another a worn out body lying in the dust.

A body that is used to the cruel awakening, recalling the touching closeness of a now distant hand, the absence of mother hope. That man, therefore, must be one of them. Despite all odds being against him, he would get up.

As I went up again to take a much closer look, I realised that the man’s trousers were half-down, revealing a skinny backside sinking into the back of his thighs, which were covered in dry, tangled hair. Hair that looked as though flies were guarding over small holes and wounds, reminiscent of dog bites or small craters that were about the erupt.

Part of his damaged right testicle was also popping out. As for his face, it was covered in a thin and sticky layer of some kind of glue that seemed to have caught the intense expression of a face that one pulls when terrified or escaping from something.

It suddenly hit me that this man is dead and I looked around. UN Drive was caught up in its routine – cars were going by, pedestrians were going by – and the occasional person would leer sideways but walk on. Some kids were playing with pneumatic wheels. I turned to walk away, as the thought of the plate of spaghetti that I was about to have for lunch popped into my mind.

Spaghetti drenched in tomato sauce, lots of tomato sauce. I opened the door and walked in, placing my bag on a chair, and for a second (just a second…) I said to myself that this is all a whole load of bollocks. This is all.

As I left to go back to the office, the spaghetti is now in my belly, I stopped by again. That man is dead, he must be dead. So I asked one of the guards. He sternly snapped affirmatively that the man was dead indeed.

“How did he die?” I asked scrunching my face, feeling scolded.

“Something in the throat, poison.”

“And nobody…?” but I couldn’t finish my sentence. I clamped my jaw and bit into my lips and set off onto UN Drive again. As I approached the office, the mangoes were still there, the Liberian street vendors still had the same expression; everyone was exactly the same as they were. I entered the office and got back to work.

As I was tapping away at the keyboard, I heard someone say: “It’s not the first time that I have seen a dead person. As a child I often wondered what a dead person would look like.
One day, in a city not too far way, some friends and I got out the car looking for fun when a guy told us that the man they were carrying away was dead.

But everything went on as if normal, that man was still there, his hair, his face, his body. Then we went on to have one of the best nights in a long time.”

When I got home that evening, I saw that they had enveloped the dead man with a white sheet. Somebody stopped me in the street and started up a conversation about languages. A woman with a child joined in. We all had opinions to share about how important English, French and Spanish are.

There was a festive atmosphere in the street, the cars were driving by at a pleasant pace, with little flat and coloured hats hanging out their windows, against the backdrop of very good music, people singing and a good chorus. There must be a party about to start somewhere. Joy.

I AM HERE YOU BASTARDS
Trip to Ghana (6 of 7) - What do you need a knife and fork for?
RECALLING THE PRESIDENTIAL ELECTIONS IN LIBERIA (1 of 5) ON EDGE