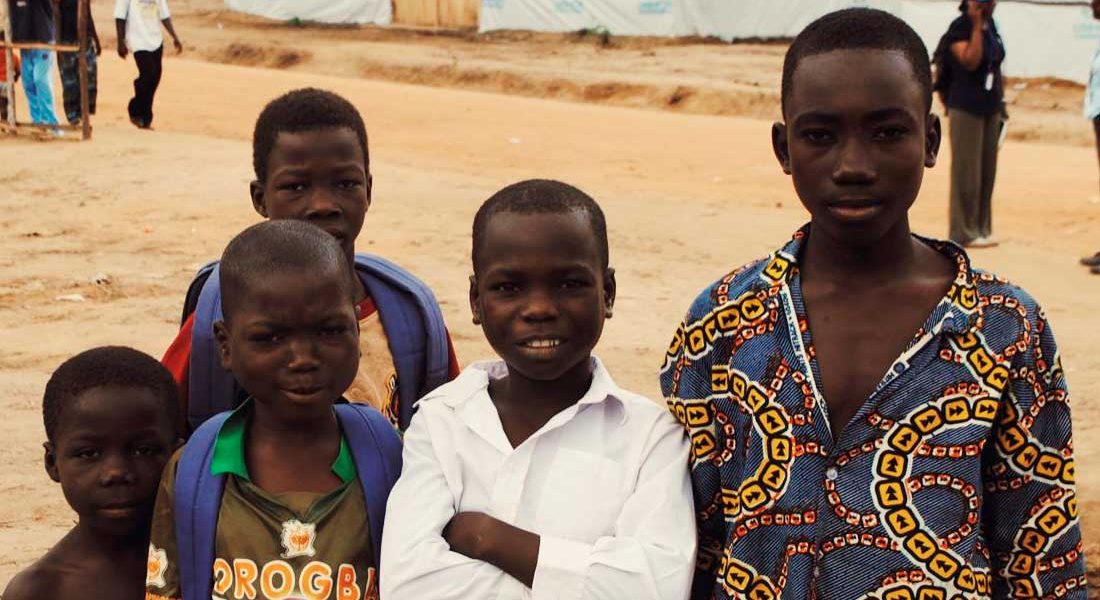 IT’S FULL OF PIGS. That’s what we found upon arrival at the next village, Green Hill Quarry, in Liberia. The village is shaped like an L-shaped slide. It’s so inclined that it feels like we are sliding, wheeee. The dirty pigs, which are emaciated with protruding bones, are scurrying all over the village.

They eat a lot, these pigs. These pigs eat so much that they are a real nuisance in Green Hill Quarry; they are scoffing down the food that belongs to the residents of oblivion. That’s all we needed. And just like all bastards, the pigs are funny and friendly. You just feel like laughing when you see them jumping around like unruly kids.

They’d be real hoot on a night out; they’d be the kind to stay out with until five or six in the morning and then turn around and say: “Follow me mate, there’s a helluva bar just around the corner…” All the pigs in the world are just great.

The residents have been told over and over again: the pigs need to be kept in the pen, within the fences. But like all pigs, these pigs slip out through the first hole that they can find and run away, devouring everything in their path. However. Sometimes they do listen. Just a little.

Pigs are not as anarchic as they seem, they are not as loyal to Bakunin and the Sex Pistols as they make you believe and sometimes they actually obey. One example is when our female guide screams at them – or rather gurgles a few shrieks that sound like a wounded sparrow – and the pigs politely trot over to join the scrawny dogs that also roam around here, without a care in the world.

These dogs no longer know what it is to be stroked; with their earthly demeanour they seem to be stuck in survival mode, their gaze vitrified. They come across so distant, as does that woman.

At the next village where we stop, Shilling Town, pigs also roam around freely. We go to assess the cassava plantations, which have been financed by the project. We set off, starving hungry, with that pale face that we human beings that are born on planet Earth get when we haven’t had a bite to eat all day.  Later on, not too far away, we find a kind of shop with some food items.

Here I am, in a village in the middle of nowhere, on the side of a road that isn’t even a road, but rather an attempt at something or another. I am so thirsty that I grab the water just as Fred warns me to take care with the water (H2O) because of dysentery.

Well, dysentery is an art, so I drink and drink to quench my thirst. I drink it all up. Noooo, not really.  After Fred’s warning, I chose not to drink the water!

A few hours later, I say goodbye to Fred and Alex and head into Gbarnga again, where I am expected at another brief meeting with another international NGO. I am greeted by the embodiment of absent-mindedness itself: his name is André. We arrange to meet the next day. Outside, the workers of the Liberian organisation that works with the international NGO I’ll be meeting tomorrow are resting in several huts, cooking on coal. They share African stories with me, but to me they could be about penguins in a desert, such is the level of conflicting references.

A man tells me to get into a brown Toyota Hilux and I do as I am told, after which he drives to the Hilltop Hotel in Gbarnga. A hotel in this corner of the world, a hotel in Gbarnga! Nothing compares to the feeling of arriving at a hotel, I reflect, as the sun sets and I walk down a corridor caressed by whispers that soothe my steps…

My mind wonders to a Gin and Tonic, not sure why, while I follow one of the employees into the blue-carpeted room. The guy bends down to spray the corners with anti-mosquito spray. Pssst, pssst, that’s more or less what it sounds like. And there’s the mosquito net, standing proud like a canopy. I can feel the presence of mosquitoes; you can see tiny black dots, soaring in all directions or crashing into the mosquito net.

I turn on the TV and I manage to make out an African league football game on the screen of reddish and grey dots amongst other incandescent reflections. I can confirm: it’s the worst football match in the world. What a delight to be able to watch the worst football match in the world. It’s a fact: human beings always have fun when they are having a rough time. Truth is, the pitch looks enormous, and dear me do they find it hard to reach the goal on the other side! Come on, pass it over!

The image of a comfortable night soon starts to crumble (bet you saw it coming) when I discover a washbowl in the bathroom but struggle to find any water, like a game of hide and seek. But what bothered me the most was the noise. Noise, noise, noise – of many kinds. Not even the best drummer in the world would have as many resources for sound as the noises you hear in Gbarnga.

Gbarnga awakens at four or five AM. And if you happen to be sleeping by the roadside, your ears will soon detect the different sounds, from a lorry loaded with diesel to the whining of motorbikes, and from the gardener nearby to some other guy who left his keys god knows where and screams: “Yeah, ¡ma man!, I said…!”  So you start to toss and turn in bed, saying swearwords, then toss and turn again and wonder whether getting up early is proportional to their efficiency. Getting up this early, or even later, can only lead to efficiency if one is efficient. I am sure the pigs understand what I am getting at.

The brown Toyota Hilux comes to pick me up to drive me a few minutes up the road to what turns out to be a crazy meeting at the international organisation’s office. André hands me over an agenda, where it says that lunch is at 10:30 AM (?) He corrects it. Meanwhile, the workers of the Liberian organisation are roaming around, some walk by, others take a seat, some on chairs, some on the windowsill.

Patience, patience. I start to ask questions to which they shrug their shoulders, leading to even more ambiguity and confusion. OK, here goes. After which we immediately get back into the brown Toyota Hillux.

Here we are, driving down red roads flanked by green, ever-so-green.  Everything is red and green, red and green, green, green, red, red. Until we enter Nimba County (greener still), and get out of the car at Kpain, where some guy leaning against a lorry asks me if I have any boots for him. Meanwhile, one of the organisation’s workers who followed us on his motorbike is in charge of mobilising the village.

The villagers start to gather at an orderly pace, at that pace. Now it’s Kpain’s turn to get excited about our arrival. We all meet at some kind of parish where the tribal chief chairs the meeting. It’s very dark, but it’s easy to make out that the boss’ face, with his intelligent eyes, is reminiscent of Ray Charles.

Crikey, these people out on the field are smart as a whip. The one on the motorbike introduces me to the group. And now, following his words, it’s my turn to intervene. I tell them that they should take advantage of what’s being given to them, that it’s a good opportunity to do something significant. It’s true.

A debate ensues. They ask me for things again, they want me to solve issues… again. To my right, two guys are starting to snore placidly with their heads between their knees, whereas the one on the motorbike has a mocking grin on his face. I am not sure if it’s the face per se, but it’s annoying. Smart as a whip, brother! At last, he changes the expression on his face and soon adds: ”Carlos, this is Africa, come and have lunch with us all.

BUY ME SOMETHING, WHITE MAN
How does it feel to arrive in Liberia, in Africa?
RECALLING PRESIDENTIAL ELECTIONS IN LIBERIA (5 of 5) ELLEN OR WEAH?