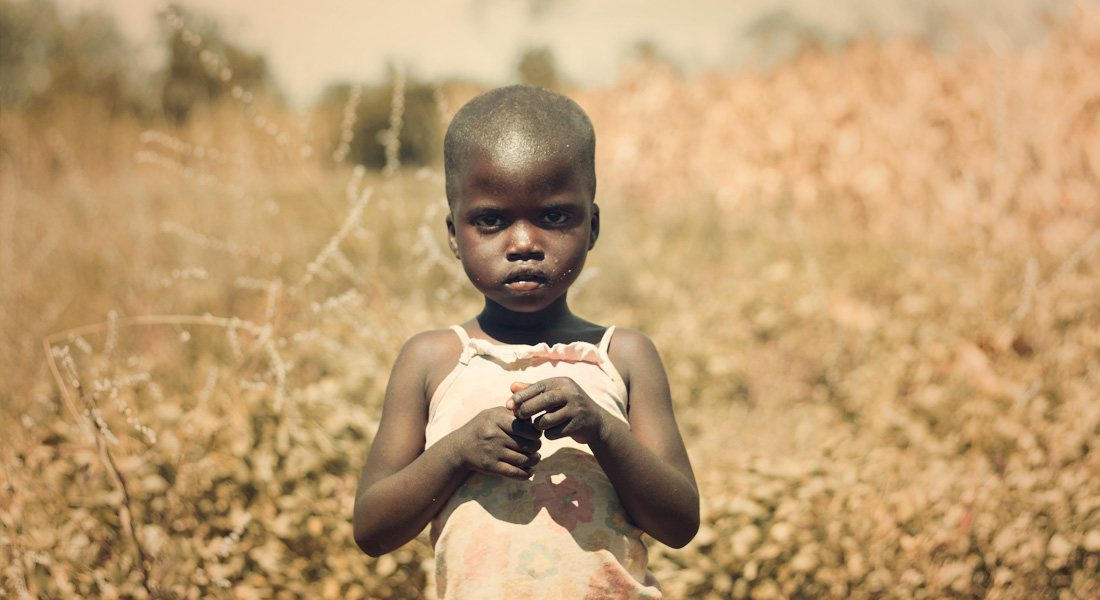 THE FOOD TAKES A WHILE TO COME. The food sometimes takes a while to come in Liberia. So instead of having lunch, we keep making our way into Nimba County and head towards the next village, Bounaldine, in our rickety brown Toyota Hilux. André, by the way, sits in the back throughout the journey, throughout the day.

Well, he isn’t actually sitting in the back, but rather surviving in the uninhabitable slither of space that can be found between the back of the front seats and the steel cabin wall. This Hilux is not only a freight car; it’s also a rather unfriendly passenger car if you don’t happen to be sitting in the front. So André is squashed up in the back, like a reptile or a sheet of paper.

Our French passenger won’t breathe again until we open the door upon arrival at Bounaldine. Glimmers of colour take shape against the backdrop of criss-crossing flashes. Of all the faces that are approaching, the quiet gaze of a girl stands out, her mouth is covered by fluttering flies.

I shake hands with several of the locals, clack, clack. The girl also comes over so as to be greeted.  I am in doubt as to whether I should hold the girl’s hand or not, but then our hands meet but only for a split second (it felt like three hours) because someone soon snatches the girl and hides her somewhere. There is always the lower level and an even lower one than that and so on and so forth.

We walk on, and as per usual, the whole village follows us and all the children jump about and laugh at our heels. The workers of the ‘organisation’ led me to a rather dark, little house, where quite a lot of people keep streaming in. We settle in a small room with a poster of Jesus Christ on the wall – shining, white, immaculate, clean and spotless. We sit in a circle and people start to talk.

I knew it would happen. Because.

The project that we are helping to develop in this particular village is quite peculiar as it brings together rice fields and fish breeding and hardly depends on tools for its implementation. But the local peasants, like many of the locals that we have visited, simply can’t accept that and all they keep asking for are boots, shovels and other farm tools. One by one they all stand up and repeat the same thing: “We need tools.” Finally, having listened to all of their demands, it’s my turn to take the floor.

What do I say now?

I can’t lie to them and say that tomorrow we’ll come with a truck full of rakes, boots, machetes and other tools. And anyway, they wouldn’t believe me. These peasants are sharp as tacks. So I choose to be frank and suddenly tell them how I see life: that if you really want something, you can get it by setting your mind to it and working hard.

The speech just seems to flow and at one point I am driven by a strange emotion that just pushes me further. Like flying. As I finish my fiery speech, everyone is gobsmacked. Then I add something at the end, a friendly note, I think, after which someone laughs, then we all laugh out loud. Then someone shouts:

This is more like it. We all sit around a large pot full of rice, chicken and carrots and start to gobble up. I feel really clumsy; I find it hard to cut off a piece of chicken thigh. I envy one of the organisation’s workers, who has no qualms in ably grabbing a piece of chicken and voraciously shoving it straight into his mouth.

I am surprised to the see the driver of the brown Hilux eating. It’s quite unbelievable to think that all human beings eat, we all need to eat, pee, sleep. It’s just that I am sometimes taken aback when I see certain people eat.  Just one of those things.

I look out of the window and see that girl with the flies again, hanging around somewhat lost and distant. The lower level. Meanwhile, a guy who looks like a baddie and who’s been whispering over for some time something or other about doing business, asks me for my phone number, gives me his and tells me to call him, that he adds that he has a lot of plans in his head. He then really pulls the face of bad baddie and says: “This is between us.”