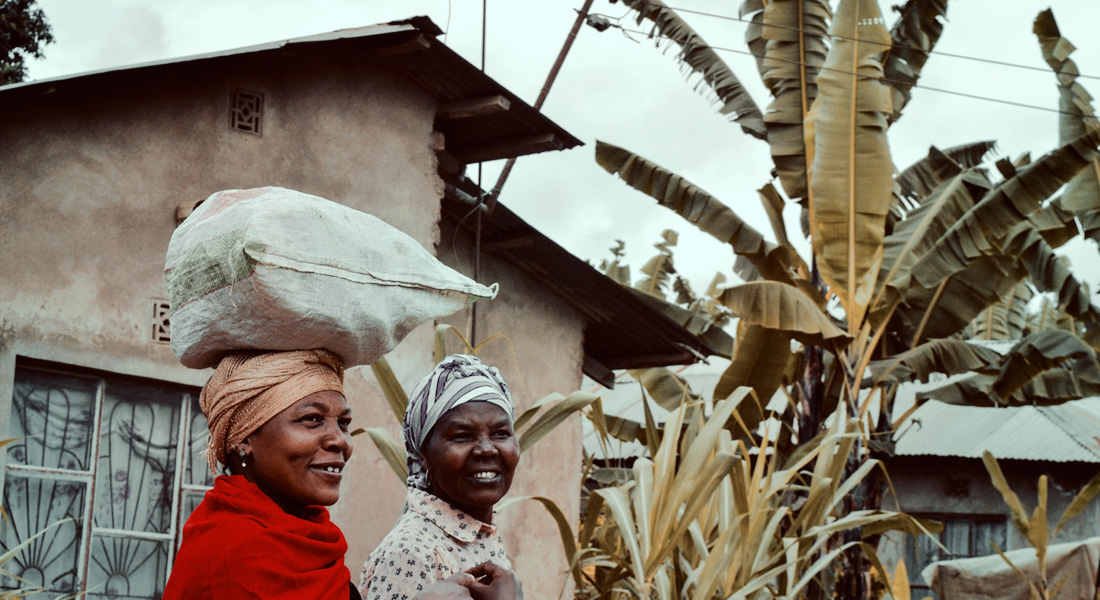 Click, click. We have several photos taken with the people at the organisation and with the whole village. Those photos immortalise a great moment. Then we set off to see the cassava plantations on the outskirts of Bounaldine, Liberia. We walk and walk. We walk and walk amidst lush trees, which almost poke your eye out with their branches, they scratch at your thighs and they draw some blood.

We walk and walk amidst the green and ever-green and at times on a dirt track.  At one point, the land is parted in two by a creek. The only way to cross it is by stepping on a shoddy trunk. “This is when I start to think of my mother,” says André. The villagers hand us over some thin sticks, which serves as poles for balance.

Further down, one the Africans has jumped into the creek, which sputters brown and grey water, probably hiding a curious aquatic fauna down below. The African jumped in so as to help us across, and his assistance turns out to be decisive; without it, more than one would have fallen in.

I don’t find it easy, but manage to cross to the other side. We keep walking and walking, and once more I feel as if I am driven by some kind of euphoria that keeps me going, without stopping. I walk on full of enthusiasm, come on, move on.

The workers from the organisation pull faces at me to implore me to stop, but I just want to see another and yet another cassava plantation. So the entire cohort has to set off again. When we reach the next cassava plantation, I come across some kind of short cut and worm my way in. I am followed by the baddie, who is starting to get on my nerves, as he insists on doing business and what not.

It doesn’t hit me how shattered I am until we are heading back, in the brown Hilux. I crack a few jokes with André on our way back to Gbarnga through the mud, the red mud, or God knows what. The car has already stalled a few times, of course. It’s not the first time that the driver (a real mechanic) has got out in the middle of the rain to fix something or another with a suspicious wrench, and the Hilux has always started again.

André reveals that he is a real bookworm and he talks to me about the Ivorian writer Ahmadou Kourouma. “He didn’t write many books, but the ones he did write…” Tranquillity engulfs us during our return. I don’t want to go back.

When evening comes at the Hilltop Hotel, I feel ’European‘ and ’White‘, for the first time during this trip.  As I turn up for dinner, I realise that my hair and my clothes suddenly don’t belong to this atmosphere. Or something along those lines.

I have dinner by myself and I can’t help but notice the people in the restaurant and more specifically, the group of Whites on my left. Among them is an energetic, enthusiastic woman, sharing something, an idea or a project, as she raises her hands in a ‘YES WE CAN!’

There is a white-haired guy who looks very unfriendly. There are also two young girls. Young girls. One of them is on the same wavelength as her boss; she gets excited at the same time, while the other girl, well, she only joins in occasionally and, in any case, with moderation.

And then there is a fifth, the only Liberian at the table, sprawled on the chair as he checks his mobile phone, the friend of the disoriented. When people feel lost, they obsessively check their phones. And tap the little buttons.

In short, the Liberian has no idea what they are talking about at the dinner table, and he also couldn’t give a damn. So he keeps on reading some message that was sent to him a few days ago, which has him all psyched up. And then he reads another one, and another. “That’s exactly it!” screams the white lady a few minutes later.