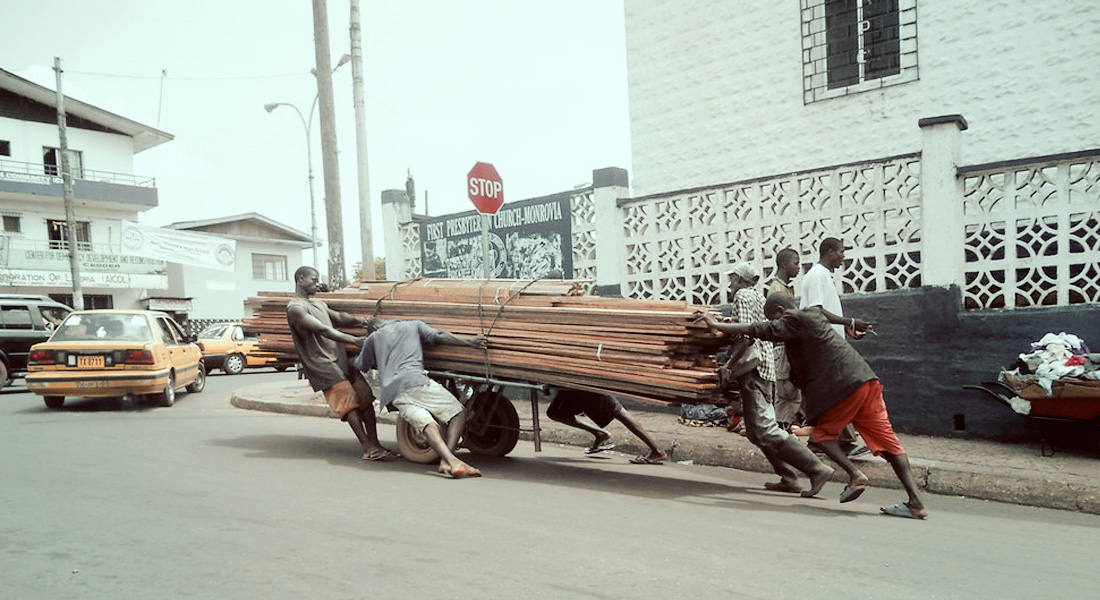 ONE DAY MORE In LIBERIA (ONE DAY LESS…) I am exhausted as I start to write. It’s been a hard day again and the last thing I fancy doing is tapping away at a cold keyboard. So. It’s time to evoke Stevenson and remind myself that not a day went by when the author of Treasure Island didn’t write despite falling prey to deep, stabbing pains. The Scottish writer did not give up, pen and paper in hand. So here we go. The strength comes from somewhere. It comes.

It has been a few weeks now since I have been back in this city, Monrovia, in this country Liberia, in this continent Africa, and it’s happened to me again. My head, filled with images, is all messed up – it just floats and floats. It turns out that.

When one returns from home and has had, let’s say, a good time and then goes back to the workplace clouded over by confusion and euphoria, one can’t avoid being overrun by a continuous flow of visions, interrupted only by the timelessness of time: a certain gaze, the possibilities, a kiss.

During my first days back in Monrovia, during my first hours in the space thereafter, as I confronted my immediate past once again, I was astonished to discover and reencounter new Liberians, new lungs, new people who also have a past.  A past that I am not part of. They have hardly been part of mine and I too have not appeared in their lives.

And that’s because just a few days ago, back in the white world, I reacquainted myself with my distant past, a distant yet lasting past that is fucking solid and rooted. Eternal. I recognised my tribe, my space, my places, the smell. I spoke in a different way, with a different accent …

Back in Liberia, I walk down UN Drive, besieged by an inebriated continuous flow of melancholic and at times, deceitful images as I realise that suddenly I too am a stranger in my own eyes. My fingers seem remote, my nails speak Russian. There are no perfect places, only moments.

For each one. And as I walk into what is now my home, I can’t quite grasp that I live here, in Mamba Point. All of a sudden everything is silence. Even my street, UN Drive, which tends to be quite lively with speakers blasting out reggae, rap and soul, is now cloaked in silence, like an accomplice of this mental disorder. And I ponder. Staying here is somewhat… well, leaving is also hard.

Slowly but surely I start to recall that it’s not the first time that this has happened to me. Returning to the space thereafter requires a few days of acclimatisation to get used to the idea that indeed you do live in this house at Mamba Point, that you in fact do work at that office and that everything that has happened to you in those far-away places of Liberia is true. You almost want to punch the taxi driver to confirm that he is real.

I find it fascinating that human beings can reproduce and live in any corner of the world. It’s a relief (at times) to think that all of these people can just get on with their lives without having any need for that which I am missing now, and vice versa.

It is abominable really, because one is back in the space thereafter, in a new Monrovian space, without a past, without a calling card.  It is taken for granted, just as you take a tree, a car or lips for granted. No questions are asked.

Nobody asks where they came from, what was there before. Whether this man or this woman has achieved ’great‘ things in life, whether they cried, betrayed, or ever wondered if Mars is a brunette or a redhead. Who cares? I have to start from scratch in Liberia.

That’s why anyone who is someone in any ’village’ is disconcerted at first when they get to university and realise that they have instantly lost their status, a status that nobody recognises anymore. That’s why when some people arrive at university or a new place, they are pleased to no longer be pigeonholed the way they were back in the ’village‘. These things happen, mate. They have happened and will continue happening. Building a new life, a double identity and coming face to face, in secret, with the new.

I turn on the computer and watch a torrent of emails pouring into my inbox, as if under pressure or constricted by a suppository, both terrified and expectant. There is always some message amidst those emails… I get up for a second to fetch a beer and realise that Anthony has bought black beer; I don’t know why he has chosen black beers. It must be spring. Probably 1928.

TRIP TO GHANA (2) of (7) – A RAVE-UP OF A NIGHT AND A HECTIC DAY IN ACCRA
YOU AND I ARE GOING TO DO BIG BUSINESS IN MONROVIA
THE LIBERIAN SIESTA, THE CASINO AT MAMBA POINT, THE OTHERS