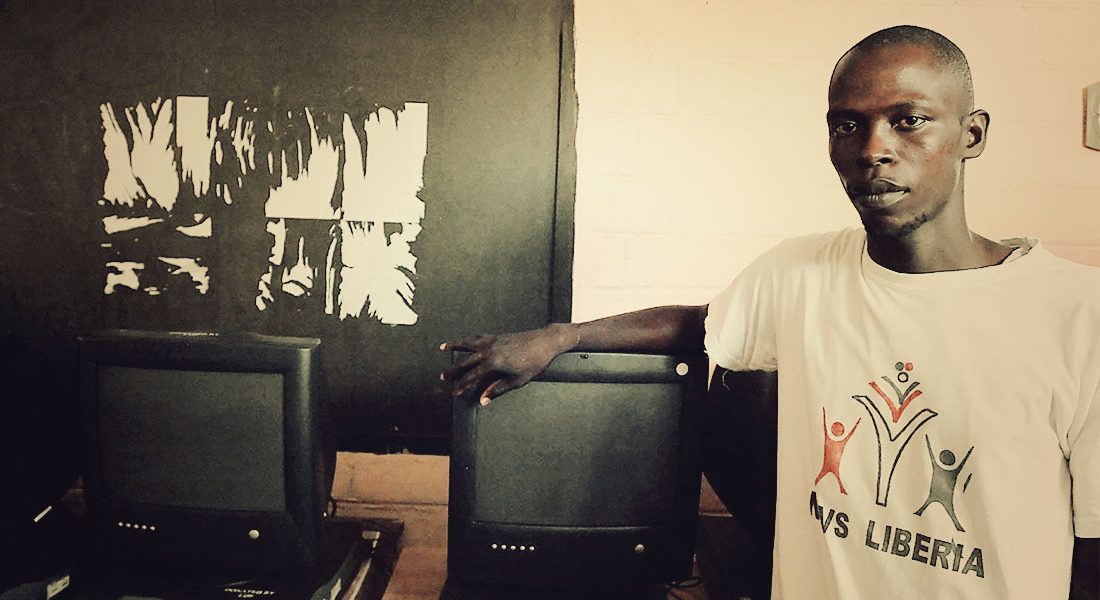 In the corner sits a man taking a rest, his shirt half-open and his head on his chest, hiding his sleepy eyes. The few remaining ones who are awake drag their feet. Their leaden eyelids look as though they are about to pull the curtains. Everything is falling asleep, everything is tired and yawns.

So I head upstairs to see what’s going on there. I walk up the stairs to the second floor and find three souls openly snoring away. Theoretically, the meeting will take place in this dilapidated and absent building. In the middle of this collective siesta of snorers, I feel the urge to walk over and look out of the window.

There’s a view onto the beach opposite Redemption Road. The palm trees and the wind appears to be a greenish colour. I can see the street down below with a coarse yet constant flow of traffic. I get the impression that everything is oxidised, carbonised. Everything is so tropical, so tropical that I beg the breeze to refresh my forehead with a handful of water from that supposedly turquoise sea, which now comes across as a sea of grey, of slime and remains.

Actually, I am not too surprised to find that most people are asleep. Now that I have been in Liberia for some time, I know for sure that the meeting will take place. When it will take place is another matter that few are really bothered about.

Now that I have been in Liberia for some time, I know that this country functions to the rhythm of a few naps; taking a nap is as normal as drinking a glass of water at lunch.

Why? Well, it could well be that Liberians are the first to wake up, and so maybe they are also the first to give in to the vagaries of reflection known as being tired. My friend, Stephen says that Liberians don’t sleep very well in this country, fearing that their dwelling may be attacked at any given moment.

That’s why they are so tired. My friend, Stephen also says that the meals are so heavy, that Liberians and their full stomachs have an urgent need to close their eyes at least once a day. There are other theories…but that as it may, it’s quite normal for a Liberian colleague to drift off and placidly close his eyes in the middle of a meeting, proceeding to take a casual but focused nap.

One is right to call it a vigil. A Liberian may seem to be fast asleep, well beyond Freud or Young’s state of sleep, yet when you least expect it, wham, they have joined the conversation again with some exacting idea or a long well thought-out statement, while you stand there in awe, wondering how he has managed to hear you, to follow you. And it makes no difference where they are, because they could be at a CEO’s or minister’s office, a Liberian knows for sure that nobody can take his nap away during the day.

That’s why I feel quite reassured as I look through the window. I know that even if I am surrounded by a concert of hoarse, guttural and enjoyable snoring, there will be no sleep-inducing consequences; on the contrary, a good nap livens them up and restores their energy.

So the meeting takes place.

That same evening, I experienced something else. There were four or five or six of us at the Casino, I can’t remember. Vanessa had insisted that we stay to play ’at dice for just fifteen more minutes.’ I had heard a lot about the Casino at Mamba Point. But I wasn’t expecting such a flame to spark up on this quiet, dark night.

After downing a few Club Beers, everything seems more violet. A burly guy let us in and the bright, fake lights unveiled a blue-carpeted hall with women in red and black tight dresses latching onto Mr Dollar.  They zig-zagged their way around the arcade slot machines and the green playing tables. Around stacks of card, tawny men, ice cubes and a red-head making kind gestures with his head.

There is a blond woman wearing red high-heels, women who are never to be seen on Monrovia’s streets are now spinning a roulette and affirming: “It’s time to play.” Women with night-time eyes that exude the neutrality of arousal, as if to say, play and wait and see or, you can look but you can’t touch and so much more. In the middle of the night.

Where am I? Can it be true that only a few metres away from this spacecraft, people scrape out a living in the slums? Vanessa had already found her way to a corner where she had her eyes sharply set on some cards bearing the mark of tobacco and neglect. A glass invaded by some brown liquid stands beside her. As I wandered over, the red-head started chatting to an Indian woman but Vanessa scolded him to shut up because she needed to focus.

The red-head stepped towards the left, levitated, and then condescendingly disappeared amidst the arcade slot machines, full of watermelons, melons, peaches, bananas, coins… There he was, the red-head, who was plainly out of place as all those fruits started to cascade onto his shoulders, flow into his ears, and fall into his pockets. “Today is a good day,” said Vanessa as she exhaled a puff of smoke that blended into the fake lights and other miracles. In the middle of the night.