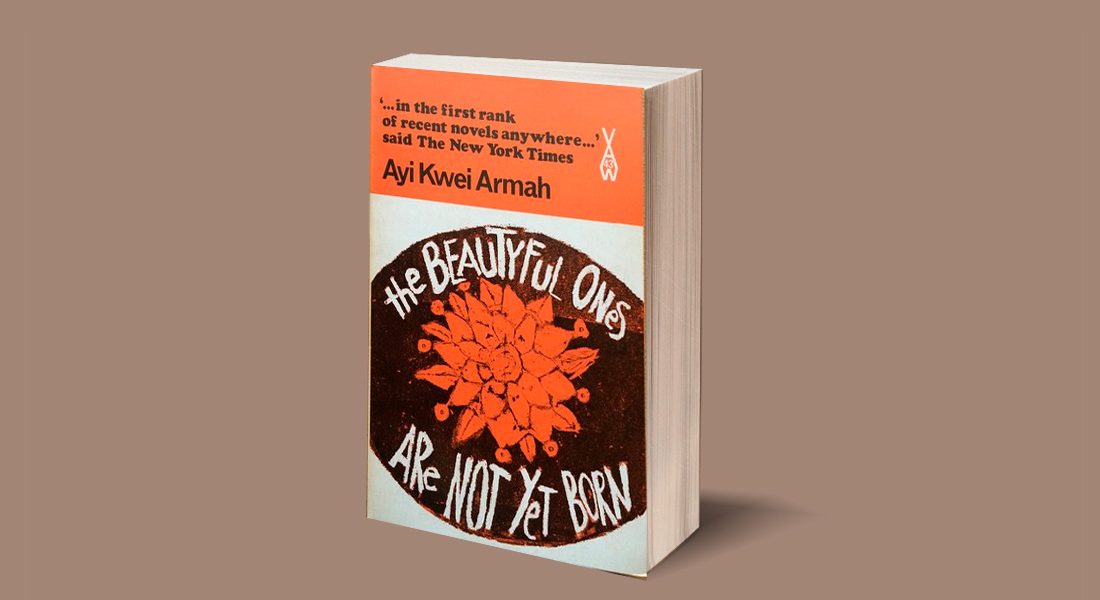 The Beautyful ones are not yet born by Ayi-Kweih-Armah is a novel that tells the story of a railway traffic control clerk in Ghana, who is disenchanted with life and the course of events in his country. The main character remains nameless, as Armah simply refers to him as ‘the man”. He feels very lonely and misunderstood and finds it increasingly difficult to live in his own country, on his own continent.

He has to hold out against the pressures of his ambitious wife and mother-in-law, who can’t quite grasp why the man refuses to accept a bribe from a timberman (they aspire to enter the system and become rich the quick way). The man goes through life unmotivated and only able to find peace in his walks and with his only friend, Teacher. Teacher is a man who walks around his home naked. He left society behind a long time ago and took refuge in his books, in contemplation and in his bohemian lifestyle. Teacher makes astute reflections on life, however, in his own words, he is still not happy. He feels trapped.

The man feels overwhelmed by so much corruption, which is embodied in Koomson, an old school friend who chose to fall into line and is now a Minister in Nkrumah’s government, a government that is purportedly socialist, but in practice it turns out to be more of the same.

Koomson, just like all other corrupt officials (after all, he who does not steal in Ghana and in Africa is plain stupid), sets an example in Oyo’s mind (the man’s wife), and in the mother-in-law’s, who insist that the man should take advantage of all possible means, be they illicit or not, to get rich and become someone of importance. Regarding Oyo, Teacher even goes as far as saying to the man that he will have to leave her to enjoy her own sadness, unless he is willing to destroy himself to feed her desires.

The pressure to become corrupt continues to mount, but the man refuses to capitulate. Despite feeling immense pain at such refusal, and having a guilty conscience as his values are turned upside down, he hears voices whispering to him stipulating that it is wrong not to steal.

The truth of the matter is that the man feels awful at having to take such ‘honest’ decisions, as they contradict the general trend that applauds corruption. Corruption is ever present in society, that even if you wanted to pursue corrupted officials so as to convey an image of public honesty, the investigation committee would be set up by the corrupted officials themselves, along with the ‘transparent’ structures needed to save themselves.

That’s what makes it so hard to live in a country, on a continent, where most people aspire to live like the very recent white rulers (or executioners, depending on which way you look at things). In fact, according to the narrator, Ghanaians did not feel hate towards white man, or a desire for revenge or something along those lines, but rather, Ghanaians really and truly felt love for white man. The black man loves white man (who is still somewhat in control) although the black man actually needs to find his own solutions himself (according to the narrator).

One aspect that is not explicitly pointed out, although it does seem quite evident, is that most events in the novel take place during Nkrumah’s coming to power and the ensuing collapse of his government and thus in the midst of euphoria following African independence in the 1960s, recently freed from white colonial yoke. At times, the man himself also gets carried away by the wave of hope that spreads across the continent and across Ghana.

He joins one rally or another and he even cheers on the leader. However, deception and disappointment soon creep in, engulfing the man with such depressive thoughts that he finds himself anchored in absolute pessimism. There is no solution, there is no hope – all is lost. Ghana, Africa is cursed by disastrous leaders and misses out on one chance after the other to get out of this rut and use its resources to its advantage, once and for all. All hope is lost.

Melancholy and sadness make up the narrative thread in this novel. The man is not the only one to experience this frustration; some friends join him in taking refuge in marihuana and a bohemian lifestyle so as to escape the heavy burden reality.

War is also mentioned – wars that seem to refer back to colonialist disputes between Ghana and the United Kingdom. More specifically, there were four wars between the Ashantes and the British Empire between 1824 and 1901; this fragmented narrative aspect reappears throughout the novel, which often goes off track and at times even seems to play with surrealism.  In any case, it seems clear that the novel backs the argument that claims that the country’s bellicose past has created a dysfunctional and disorganised society, which finds it very hard to move forward.

Nevertheless, it’s not all bad news. As is often the case in many African countries, political positions of power are fickle and Koomson soon becomes a victim of a coup d’état against Nrumah’s government. Koomson is suddenly not only just another citizen, but also one of the coup’s targets. Having hit rock bottom, the former Minister now seeks shelter at the man and his wife’s house.

Feeling sorry for him, they take him in and the man goes as far as helping him to plan a pathetic escape through tunnels full of rubbish and lavatories full of dirt and manure. Maybe it is his loyal nature or his inner goodness that push the man to help Koomson. He manages to lead the politician all the way to a boat, with which he flees to Abidjan, whilst he stays on a Ghanaian beach.