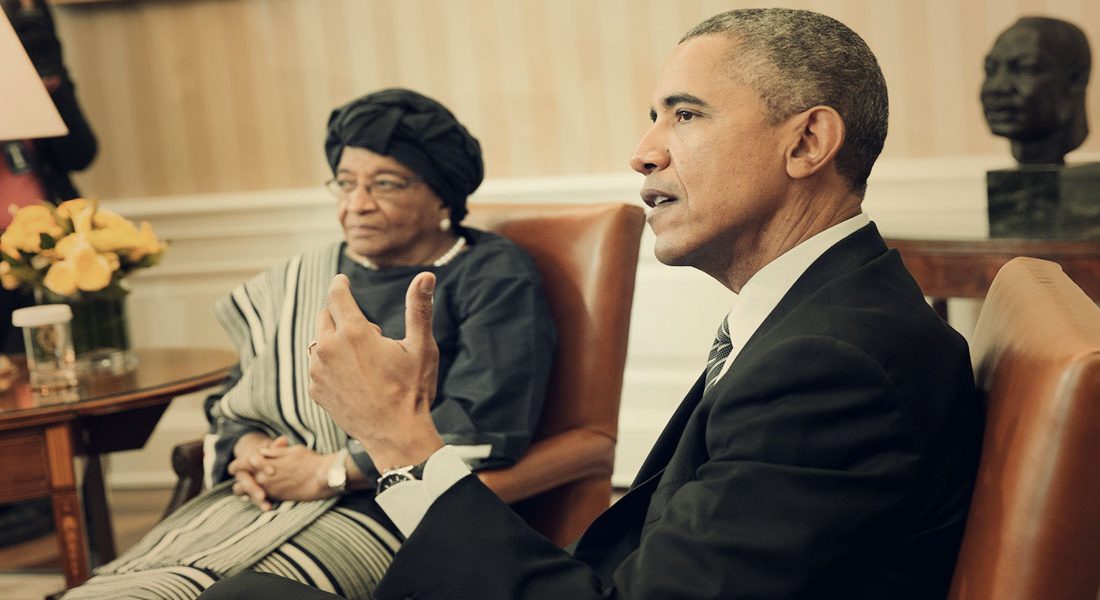 THE GATES WERE CLOSING AT THE POLLING STATION SET UP AT WATERSIDE, BUT WE MANAGED TO SKILFULLY FIND OUR WAY IN. It was still light, but the sun was gently setting in Liberia. We took a few steps and came across two tables either side of a dirt track. The plastic urns, escorted by many young people in orange dungarees, were proudly sitting there, filled with ballot papers with the position-taking of the people. A legion of observers with notebooks and pens in hand formed a semi-circle, supervising the process through their tense faces.

Silence was on the increase at Waterside.

One had the impression of being at the most decisive chess game in history. Silence, tension. Night was falling and the sky was turning orange amidst tender clouds, under the gaze of the palm trees beside the sea. And there we were, on a site invaded by two makeshift offices that were toppling over to one side – towards a windowless car with no wheels, which was overrun by kids and people trying to climb on to get a better view of the ballots being counted.

A woman wearing a white cape, a wig and a silver cross was telling us about a previous occasion, something that had happened once upon a time in Liberia, many years ago. She showed us a sheet of paper with a religious letterhead to corroborate her story.

The Swedes listened to the esoteric lady for about fifteen seconds and then slightly turned around and showed their profile, the way one does when the answer is ‘no thanks’. The lady in the white cape chose to sit down, and there we were. In silence.

The girls in orange dungarees started counting the votes at an African pace, dragging their every movement out. They first spread a grey canvas out, placed the plastic urns on top and then cut the plastic strip to open up the urns.

Once they were opened, they started taking out the voting ballots, unfolding them and piling them in an orderly fashion on top of the photo of the chosen candidate. Night had completely fallen by now, nobody was moving. The anti-mosquito repellent was being passed around.

The Liberians were observing the girls in orange dungarees with startling seriousness and solemnity. Their gaze reflected past suffering and a desire to move on once and for all. A ray. Of hope. For a second I had a feeling that I could see Liberia grow before my eyes, like a flower that slowly opens up. They had placed several Chinese lamps near the canvas and the ballot papers, those small cylindrical lamps of no more than fifteen centimetres in height that give off a bluish-violet light. Everything was blue, orange and violet.

The volunteers started counting the ballots. The only man in the group of counters was summarily expelled after having committed a mistake that would have been considered minor in a driving test. Get out of ’ere. Out with ya. The poor lad got away with just about an African tut of the lips, the sound of saliva between the teeth indicating his annoyance.

As the counting went on, suddenly voices were raised, informing everyone. The girls in orange dungarees, now lit up by the celestial smoke of the closed night, started shouting “Ellen Johnson of the Unity Party! Weah-Tubman of the Congress for Democratic Change! Prince Johnson! Ellen, Ellen! Weah, Weah!” Emma turned her neck to try and capture the whole nightly spectrum and after a long sigh, she said: “This is exciting.”

As far as this table was concerned, Weah-Tubman’s victory was becoming clear, as was corroborated by the final count. Things were unfolding peacefully with no altercations on this side. But as we moved onto the next table, towards the right, things were starting to get ugly.

The controversy was fuelled by the dubious votes, those votes that were unclear because the foundering crosses had not been penned into a box properly, making it hard to verify. It wasn’t only the ‘impartial’ observers adding fuel to the fire by routing for their side though; there was also a very short petite girl in orange dungarees feeding the flames with verbal gibes and provocations.

For a few minutes, there was a tirade of rude words being exchanged and a few raised voices. The short girl kept hammering on. She’d be histrionically told to shut up, but she’d insist, until a policewoman and an over two-metre tall soldier had to intervene to halt the altercations. Meanwhile, we silently looked on as we took our neutral role very seriously, but we did start to ask ourselves if this country was once again going up shit creek.

In the middle of the count, as the votes were being revealed to the sound of Ellen Johnson! Weah-Tubman! Prince Johnson! Ellen, Ellen! Weah, Weah! I spotted the short girl in orange dungarees with a diabolic smirk on her face, clearly demonstrating that she was having a blast in that scandal.

Another Liberian who stood just in front of her unexpectedly burst out laughing, clearly spurred on by short girl’s malevolent, cheeky smile. Fortunately the counting of the ballots went on with no further incidents and once again, Tubman-Weah’s Congress for Democratic Change was claimed victorious. That was when the Swedish ambassador stretched out his hand and said “I have to go, it’s been a pleasure.”

“A good day, don’t you think?” I answered before he left.

“This has only just started,” he retorted as he got into a black car.