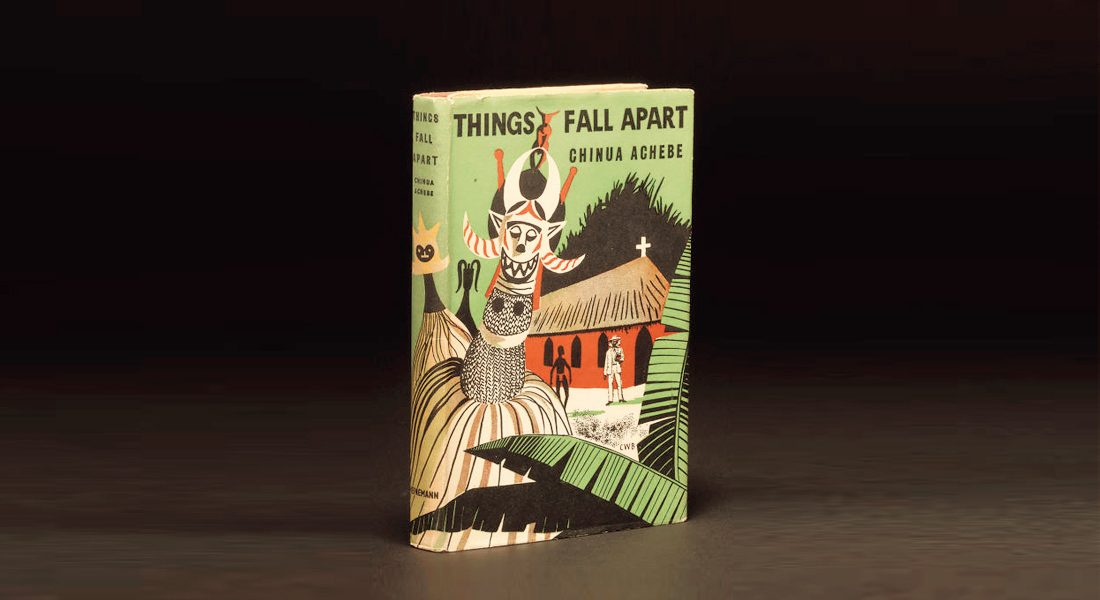 Things Fall Apart is a classic piece of African literature, and why not, of world literature. The story portrays a typical African rural reality (Nigerian in this case), where the relationship between religion, white man and the colonisation of the African continent is explained. Certainly, back in the day in Africa (as on other continents but with different nuances) Christian religion expanded by means of an evangelisation process that was not only intended to convey ‘the Lord’s message’, but also as a means to dominate and to colonise. The tool used for this purpose was an imposed educational and governmental process, which was underpinned by the successive construction of churches.

Indeed, whereas education involves a component of emancipation that helps to shape a person, in this case education stands tall as a tool for indoctrination and domination. Such indoctrination was enabled by the work of evangelisers of unshakable faith who subtly wormed their way into villages and towns, in a seemingly harmless way but with a relentless ability to exercise control.

Therefore, the imposition of Christian religion in Africa (the intervention of white man is evidently key in this sense) can also be considered a very powerful means to ensure white domination over black men, in a setting where the latter adopts the imported religion of the former, which includes the obligation to adore a white god.

This Christian immersion facilitated the act of building a government consisting in posts that still exist today, such as that of ‘District Commissioner’, as these were very often filled by whites.

Hence we can state that the book’s main message revolves around the above-mentioned events, which would in turn explain much about the current situation in Africa.

On the other hand, it is worth highlighting that the Christian religion played an incredibly revolutionary role back in the day. It was not in vain that it confronted both factual and spiritual pre-established powers. The fervent faith and enduring convictions of the Christian believers was particularly salient, and their power nowadays is so widespread, that it would be considered revolutionary to go against them, against Christian religion. One should also point out that (as one appreciates in Things Fall Apart) the ‘power of white man’ is also built on the back of the support offered by many black men, both actively and passively.

Let us now turn to the main character of the novel, Okonkwo, whose life in the end is both sad and pitiful. Achebe tells us right from the start that Okonkwo was scared, which is why his behaviour was so virulent. Additionally, it seems that Okonkwo’s chi (his personal God or spiritual guardian) does not allow him to achieve what he would have liked, and it also destines him to perennial bad luck, leading the Igbo farmer to commit suicide.

The novel (or African tradition) thus claims that human beings are pre-destined to their own fate. In other words, irrespective of what one does, fate is already written, i.e., efforts are made in vain as they do not always have the desired result. In this line of thought, the book suggests that both Okonkwo and his father failed, but in different ways.

The latter was a lazy hedonist, while the former was misguided in his sterile efforts. It is also true that Okonkwo’s legacy clearly imposes itself over that of his father’s. In sum, Things Fall Apart is a solid novel that gives us an overview of the African world and its way of thinking and acting.

I must say, I liked the novel. It has rhythm and it is vertical. Regarding Achebe’s prose, I would highlight his direct, precise style, which leaves a certain dry, almost bitter, almost acid aftertaste.

I would also state that, instead of allowing actions to speak for themselves through the characters, Achebe uses much ‘wording’ to amply inform the reader, although this factor is not necessarily a defect.

One could also say that in structural terms, the novel pans out through the narration of stories that unroll at each traditional ceremony that takes place in Umuofia. In this vein, against the backdrop of fields and yam crops, a combat is depicted followed by the description of a week of festivities etc., all of which are part of their customs. In addition, there is often a certain touch of fable and oral storytelling, both features of African society.

As for the characters, I felt that they were rather irregular. Okonkwo, the white men and other main characters are perfectly set apart; however, there are some characters that are not fully fleshed out (such as some of Okonkwo’s wives and sons) and can often not be told apart. Some of the characters therefore are left incomplete and hardly differentiated.

In this sense, the reader can be surprised to see that Okonkwo’s wives ‘disappear’ and play practically no role during his exile or banishment. As regards the dialogues, I thought they were lively, precise and real. On the other hand, I am not sure if this is a mistake, but on page 83, a certain element of poetic prose has slipped in: “When the women retired. Obierika presented kola nuts to his in-laws”.