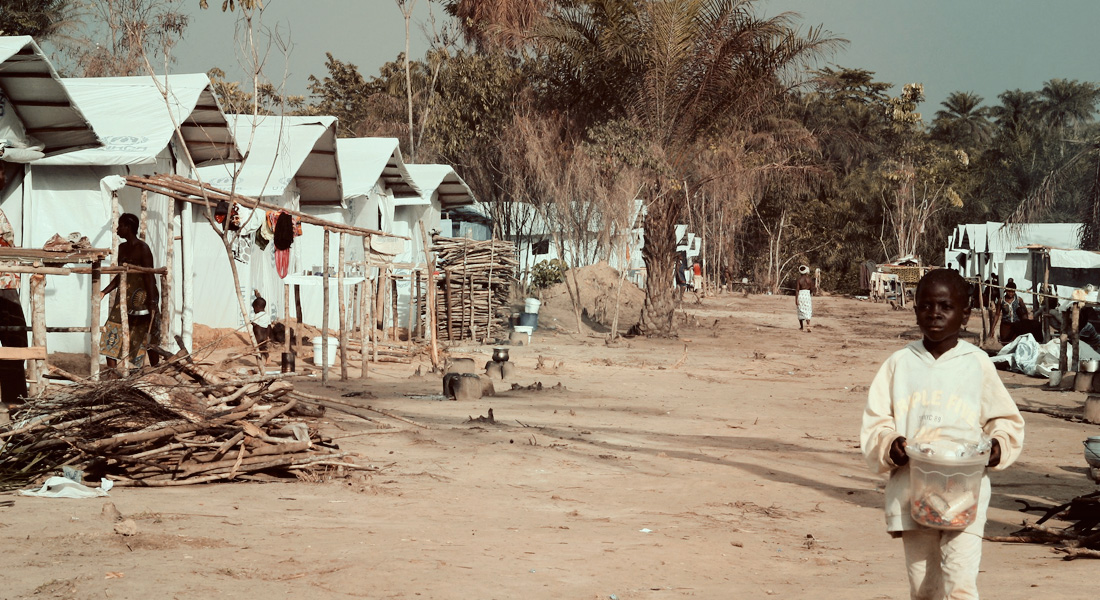 Ingrid still had not recovered and she was lying down, her body paralysed into a triangular shape and submerged in a deep dream or horrible nightmare. It was time for lunch and we had to leave the lush green of Bomi behind. We parked our vehicles near a ‘border’ post, i.e. one of those thin strings that delimits the villages and districts in Liberia and that are usually guarded by a policeman or local custodians.

We found a corner nearby some type of abandoned school where a woman was leaning against a wall. A few local neighbours, who were holding a community meeting, curiously looked at us as they sat debating under a mango tree that towered in front of us. Very close by, a few women and girls from the local market were wandering about with buckets or washbowls on their heads.

The woman who was lying against the wall noticed us and stood up and reached for a straw chair for the ambassador, which he gladly and laughingly accepted. The others sat on a bench or remained standing. The Swedes had brought coolers with them, the kind that you usually take to the beach, and they were loaded with food.

Emma, with her exquisite gentleness and cleanliness, prepared a perfect plate of cheese, salami and other appetising supplies. I was glad to see that they offered the drivers lunch, sparing us the awkwardness of seeing them disconsolate.

We all ate. Everything was so well coordinated…

After a while, the ambassador stood up and told us that it was time to get going. We made our way to the bushes demarcating Jenneh at the pace of tortoises. There was more tension in the air than in the previous centres. Over in a corner, next to some banana trees, a group of people were fiercely arguing about something nobody could guess. Somebody was accusing someone else about this and that.

I took some distance and avoided getting into dialectical details. Sometimes I found myself taking some rather mystical walks, taking in the landscape, the sky, slowly and analytically roaming, feeling as though I could levitate in Africa once again. Every so often, I’d cross paths with my Swedish colleagues and exchange a knowing grin.

Having repeatedly visited the rooms where the votes were being exercised and not having detected any remarkable incident, we decided to leave. However, we were halted by the screams of a guy in a baseball hat who had obviously had too much to drink, probably palm wine in excess. Generally speaking the guy seemed to be on good terms with everyone, but he did let off a slightly aggressive vibe.

He was addressing me and asking me what would I be in life, and so forth. I managed to calm him down by speaking very slowly to him and with the help of a policeman, who took it all in his stride.

The ambassador observed the whole scene very calmly and after clearing his throat, he called out: “Let’s move on.” So we all got into the cars and headed to St. Vincent Town, still in Bomi County, where we were welcomed by a landscape dotted with mangoes, papayas and banana trees. Our arrival coincided with that of several buses (a gift from Japan to Liberia) full of voters.

The buses were quite dusty already and full of people, adding to the great atmosphere that we found in Vincent Town. Tables were set out on both sides of a dirt track. A considerable queue had formed on the left side, whereas the right side, which looked like a pleasant summer stand, remained practically empty.

Ingrid had recovered by now and was walking from one place to another with incredible energy, if you compared her to the state that she was in just a few minutes beforehand. Ah, the human body. Ah, the human mind. It was precisely Ingrid who told me that there was a woman in orange dungarees (the volunteers’ uniform) standing by one of the curtains and spying on everyone who voted in that corner. So the two of us walked over and looked at the woman, who frowned back at us.

In fact, here disorder was gaining ground and chaos seemed in the offing, but nevertheless, it didn’t seem to be affecting the polling. By the side of a small vegetable garden protected by bamboo, a man started to talk to me amidst the crowds. He said his name was Musa as he readjusted his cap with a smile. I nodded and asked him if he was a Muslim, to which he giggled and answered no, that he was a Christian.

Giggling once again, and hesitating a little, he started: “I tell you…” then took a few seconds to recap, then assured me that as a boy he’d realised that Christians were always the ones in power, and that they dominated the Muslims, and that they had better jobs.

“So you changed religions for a job and power?”

To which he chuckled, lowering his head, and answered: “Well, eeerm… yes.”

We spent a little longer in this pleasant bucolic setting, an ideal place for a barbeque or a picnic and finally left Bomi to return to Monrovia. On the way back, the green started metamorphosing into zinc and shacks, and we entered some streets and neighbourhoods that I had never seen before, on the edge of the sea, marshes and rivers. More poverty.

We meandered into an area that must not have been too far from Bushrod Island on a muddy dirt track, which was very difficult to drive on. It was flanked by hoards of people who either greeted us or indifferently looked at us. I spotted lots of Barcelona and Chelsea t-shirts. Poverty was everywhere to be seen.

Trip to Ghana (6 of 7) - What do you need a knife and fork for?
THE ORIGIN OF CALM IN LIBERIA
How does it feel to arrive in Liberia, in Africa?