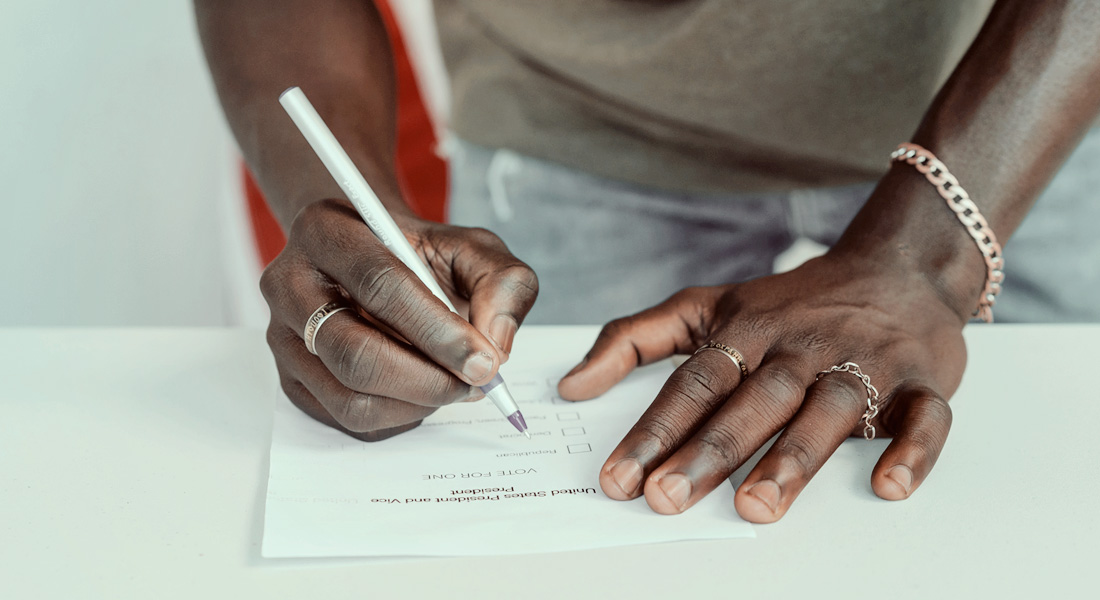 ON THE OUTSKIRTS OF MONROVIA, LIBERIA. IN THE MIDDLE OF DEPRIVATION AND AN IMMORTAL ENERGY, we get out the Toyotas Prado and make our way to a crumbling school that was hosting several scattered polling stations. It seemed as if the whole neighbourhood had already voted at these tables because the rooms were practically empty; the only people there were the volunteers in orange dungarees.

One of the volunteers showed me the registration book and I checked that all of the faces had a penned in cross next to them, a sign that most of the citizens in this area had taken their position seriously. It was unbelievable; everyone wanted to vote.

We went outside and Emma quickly got into one of the Toyota Prados. Her diligence contrasted with the parsimony of the other car passengers, especially with the ambassador’s and Chargé d’Affaires’ relaxed attitude. They were deep in an entertaining and congenial chitchat; the only thing missing was a bar and a few beers. On the other hand, Ingrid was chatting to one of the chauffeurs but turned around out of the blue to desperately rummage through the car boot.

That is when I remembered that Ingrid hadn’t eaten all day; she had practically only nibbled on some peanuts in the morning.

There was no doubt that she was excruciatingly starving hungry… the girl had a plastic packet of cheese in her right hand, but it turned out that Ingrid could not find the bread, no matter how hard she looked.

Eventually, her fruitless search led her to despair. In the middle of the slums and with immortal energy, she screamed: “Where is the bread? I am hungry!!!” At which point she was almost in tears, scrunching her face as we do when us human beings are about to cry.

Meanwhile, the ambassador and Chargé d’Affaires were oblivious to the scene as they amicably chatted away. Ingrid finally found the bread and turned to lean her back against the vehicle rear window and started frenetically and fructuously to devour the sandwich. Bits of cheese were crumbling down her chin as she opened and closed her mouth, moving her jaw the way one does after a hard stint of fasting.

To top it off, in this neighbourhood the food almost came across as bourgeois, it shined almost provocatively. But Ingrid was out of her wits, she just devoured and devoured, glancing sideways to make sure that she wasn’t the centre of attention. But funnily enough, she was in fact the centre of attention for everyone except for the ambassador and his right man, who had not taken any notice of those bites. A miracle.

It was getting late and Emma had to get out of the car and subtly but efficiently remind the diplomats that it was time to go, after which the cars engines were started and we took off. We continued into the neighbourhood and by chance located the next polling station just a few minutes away.

It was a dark blue dilapidated building, guarded at the door by a Liberian Government officer clad in an almost police-like black uniform, who was trying to control the masses with a sober expression and serene hand movements. Inside the building was a long corridor dotted with rooms overcrowded with men and women.  Many people had still not voted here, even though it was so close by to the previous polling station.

Our participation here entailed above all a rather unhygienic, dark and narrow exercise. Nonetheless, we wormed our way as best as we could into the different rooms, and once we had made sure that the voting process was running smoothly, we left back onto the street, where we were met by.

Zinc and immortal energy. Once again. We had visited two polling stations in this neighbourhood of Monrovia and we no longer had enough time to go to the one in Sinkor. “Carlos, we are now going to head toward the tables by the embassy, in Waterside. If you like we can drop you off on the way.” The ambassador said.

“Thank you, but my house can wait.” I said, filmically.

“Excellent, then you are coming with us,” stated the diplomat.

We returned to the base, to the Swedish embassy. There was Dolores and her agile movements once again, calmly mingling with passers-by and being observed from above by the portrait of King Gustav. I ate a few biscuits incoherently combined with some salami, and then we set off for the polling station at Waterside. This is when things really got rolling.

I AM HERE YOU BASTARDS
AND ONE DAY I WENT TO THE BUSH IN LIBERIA. “IN THE HEART OF BONG COUNTY” (3 of 9)
IF YOU COME TO LIBERIA FOR SCRAP METAL…