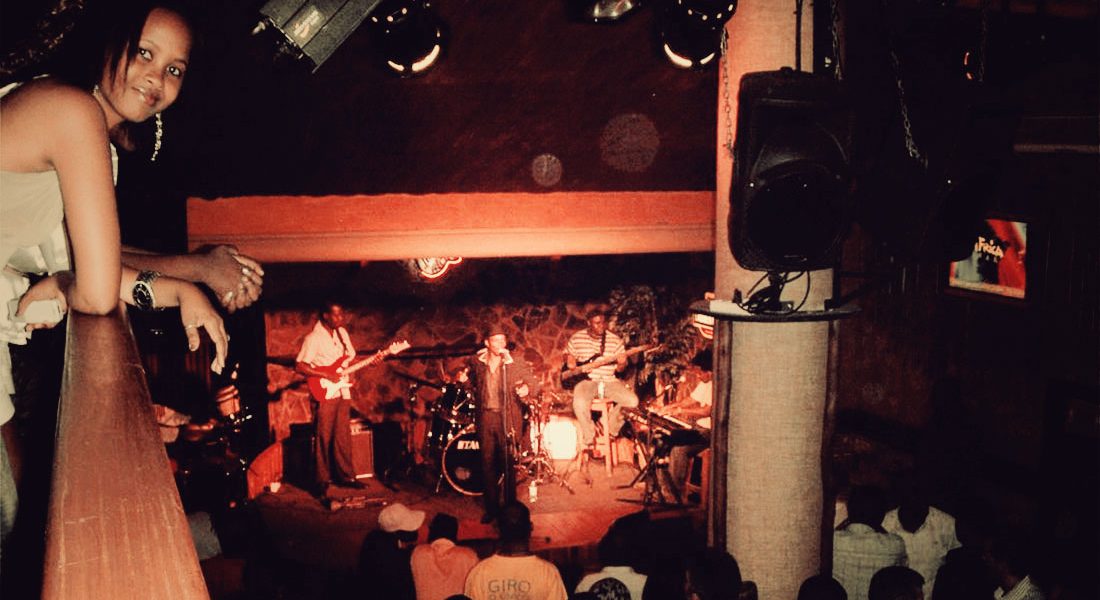 VICTOR, ANESA AND I TAKE UP THE CENTRE OF THE ROOM AT BLACK AND WHITE FORMING A TRIANGLE. We start dancing with energy. Here, in Buchanan, in Black and White you have to crouch to dance, almost kneel down and kiss the floor. Take a look. This guy in green, without bones he crouches so low, he shines so much I decide to imitate him, crouch little by little (low, lower) stretch my arms out around an imaginary something and there below, melting into the floor, I move, dance. My Liberian dance provokes a stampede of laughter between my friends and also the Liberians.

Some guy arrives with a smile from ear to ear, gives Victor a high five in order to integrate himself into our triangle and four seconds later he reveals his real and Machiavellian intentions when he corners Anesa dancing uncoordinatedly. Victor looks at his fist, he wants to smash this guy’s face in, but Anesa alone takes charge of scaring off the intrusion, displaying that feminine harshness that comes about when a female has no interest. They are the lethal, brother. Lethal.

Not much later, a big guy begins to dance right inside our triangle, our area, that thanks to so much sweat we’ve managed to secure. The enormous guy steps on my foot and not only doesn’t lift his foot for a few painful seconds, but he actually does a little dance, of the latest style, of a cool guy.

At first I think that he has done it by accident waving his tentacles suggesting absent-mindedness, amusement, but when he jabs Victor with his elbow, pushing him with his shoulder and following it up with a nudge from his huge ass, I know that this is a perfectly orchestrated plan.

On the dancefloor Anesa is dancing with one European, a baby-faced blonde guy, but who is actually really dangerous and who has got closer to us with bad, repetitive tricks. You know how it goes: at first the friendly blonde European comes up to Victor and I with an angelical smile, as if asking for permission; once he’s accepted into the triangle he says something to secure the bond, and five minutes later he’s busting impossible dance moves with Anesa, which makes Victor hysterical since he can’t compete with these rhythms.

When Anesa has had enough, she taps the European on the shoulder to get out of the way. Another white guy has fallen on the floor right next to us, and how he didn’t split his head open is a miracle. However, he gets up, laughing all the while, and orders another beer.

Inside Shakira’s Waka Waka is playing again which is interrupted suddenly when the DJ disconnects the music and passes the microphone to a really tall guy with a red hat. Silence. The music stops playing, provoking a disappointment the colour of purple. The skinny guy bonds with the mike, perhaps to sing us a song.

I can’t read his face. He has the expression of someone who maybe wants to have a few drinks with his friends, but at the same time it seems that something has failed to convince him.

With the voice of a broadcaster, smooth as velvet, he brings the mike to his lips and proclaims that the bar is his, “this bar is for me!”. Information that the locals confirm. “Yes, he’s the boss, and you have watch your step with him”.

THE ORIGIN OF CALM IN LIBERIA
I AM CLIMBING THE WALLS IN LIBERIA, BUT I WOULD JUMP AGAIN
TRIP TO GHANA (7 of 7) - SEEKING OUT AN AFRICAN WRITER