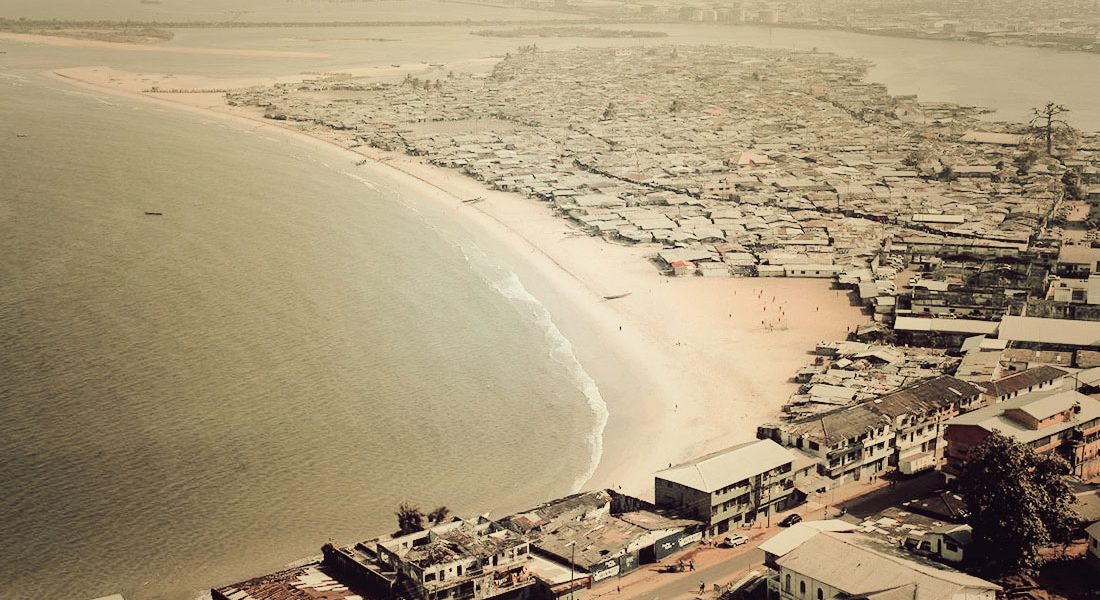 Sometimes we think ahead and this time, before going to the best beach in Buchanan, we head to the “restaurant” owned by the Lebanese man so he can prepare us some food for later, this way we won’t have to wait for centuries for it to arrive. We are intelligent people, with degrees and everything. The Lebanese guy lets us know that today they have lobster and Victor goes for it. Later we continue on in Drazen’s car, he’s playing folkloric Balkan music this Sunday morning, a Sunday that seems to have come from the country of miracles and clarity. Sunday morning man. Sometimes Sunday mornings are joyful.

We travel through Buchanan heading for the beach, seeing people with their violet and turquoise colours heading towards mass, all on their way to church and suddenly we encounter the train tracks (there they are) that cross Liberia from North to South and we take a shortcut which Drazen manoeuvres with the agility and guts of a legionnaire.

We avoid the dunes, our bodies shift about, skidding in the Nissan Patrol, but Drazen controls it all with one hand and leaves us in the middle of a large, celestial beach, in the middle of palm trees, lagoons and the most glorious sunshine, completely alone but for a few Brazilians scattered around the beach: some of them playing beach paddle ball, others ambling along the shore, others lost. Over there.

I need to take a walk by myself and so I let Victor and Anesa know, which logically they think is a good idea. I walk, just trying to clear my mind, as recommended by Murakami, but it’s impossible, simply impossible.

My head is filled with spider webs and more people pulling on the threads of my mind, jumping from one neuron to another. The sun’s rays shoot to kill. Reddening under the sun. I could keep walking and cover all of Liberia. All I want to do is walk.

Returning, I notice that Victor is getting progressively closer to Anesa at the shore. The image of Anesa in a bathing suit is a gift from the gods and Victor continues to move closer to her. I can see them there, far away, complicit, conversing fluently but nothing happens between then. Nothing ever happens. Later, Victor, Anesa, and I, move apart a little, looking for the inspiration from the murmurs of the shore.

I remain lying in the sand, looking at the sky and the sun, Anesa stays behind to read Winter Journal by Paul Auster and Victor stays at the shore looking at the sand, the foam, kicking at the tiny waves that form at the shore, thinking, his head spinning with thoughts. Kick after kick. And in the background the Brazilians, lost, also embedded in this world. All of us breathing in silence.

Drazen returns with his good-natured expression showing through the Nissan Patrol window, and he takes us to the Lebanese, this time without us saying goodbye to the Brazilians. It seems as if Victor chose well ordering the lobster because he doesn’t open his mouth as he polishes it off. Anesa is clearly disappointed with her chicken, which smells burned,. My fish is good, I devour it alongside the sea and we enjoy the Lebanese coffee that purifies us from within.

Our performance ends with a smile and a life lesson.

On our way home I ask for The Doors, and suddenly they strike me as a bad group, slow, boring. In the middle of the bumps, the lurches, the collisions I am disappointed, even with L.A. Woman. I don’t know what’s wrong. I don’t know anything until the sunset makes me reconcile with virtues, opportunities, occasions.

Breathe. “And this way, Carlos, I recall that I, Kevin, the guy who sometimes gets tired, can sometimes see a rainbow, chocolate cake, blurred photographs, women from the sixties and turquoise beaches. And walk”. Around a round, plastic table, we drink Club beers. Our eyes open and take on the form of large sugared ovals.

Hi, I am Carlos Battaglini. It is time for me to take off the mask and reveal you a secret
EXPATS LIVE IN A BUBBLE IN MONROVIA AND I WANT IT ALL
AND ONE DAY I WENT TO THE BUSH IN LIBERIA. “IN THE HEART OF BONG COUNTY” (3 of 9)