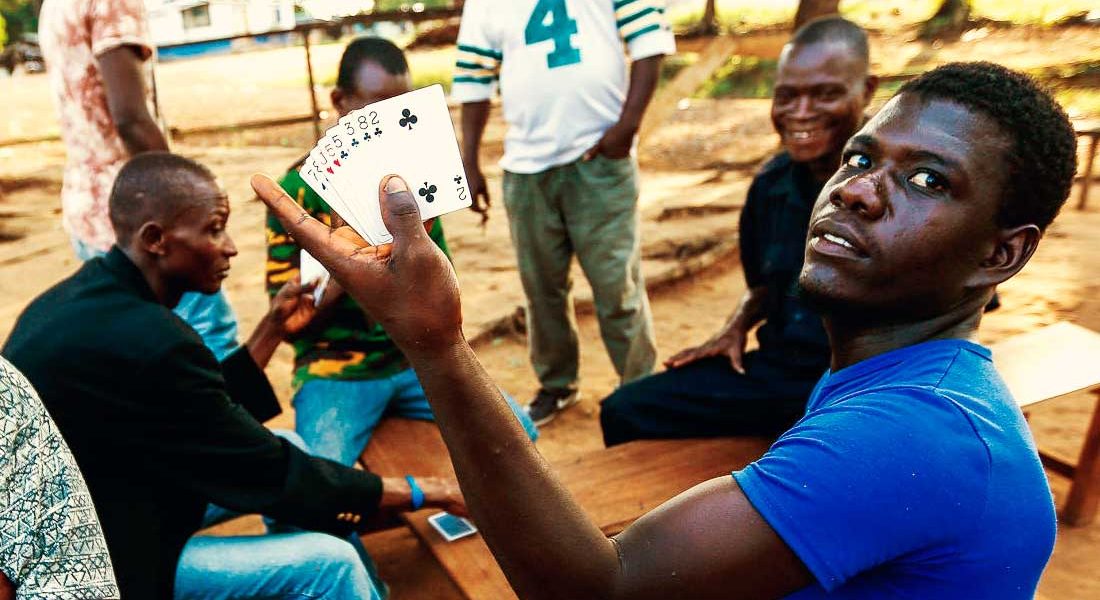 Frankie now lives in Gilberto’s house, in Sinkor. I can also hear Gilberto in some corner of the house, singing a Sarkodie song, very happy. And here I am, with Monrovia at my feet, sitting in the kitchen opposite Frankie, who is still trampling the kitchen floor tiles with his flip-flops, swaggering aimlessly as he shakes his head, whilst all the while moaning to me, or perhaps himself. “It’s going to the dogs, it really is, man.”

Gilberto walks in and joins the conversation, waving an African oxtail around. He interrupts Frankie’s diatribe as he rubs the dangling oxtail against his billiard ball-shaped head, billiard ball 8, man. Amid the laughter and the noise, Frankie manages to avert the bovine harassment, and in a rather leaden voice suddenly exclaims that now is the time to make his announcement. So we turn our heads.

Frankie starts swaggering forward again and turns like a cowboy about to shoot. “Do you know, man, there was a time when I used to have a lot of money? I was loaded, I ran several businesses. A fleet of trucks, boats, you name it. I had money coming out of my ears. I lived like a king, I had chauffeurs and maids wearing bonnets, Persian rugs and I drank tea. Where’s it all gone to now?” He glares at us with eyes that look like psychedelic beetles.

“You tell me, what now? What’s going to happen to my four sons? Four sons I have! Yeah man, Greece is in a state. He opens Gilberto’s fridge and takes a Savanna and a generous slice of cheese. He chews away. “In a state man, Greece is in a state!” He almost chokes. Gilberto lets loose a cackle, swinging the oxtail as if he were cheerleading for some NCAA team, and makes a dash for the kitchen door.

A mobile phone rings to the rhythm of blues. It’s Frankie’s mobile phone. As he puts the phone to his ear, his tone becomes authoritative and direct. “I said that I am on my way.” He puts the phone down. “It’s my girlfriend man. You should see her. She’s a doll, but you know, I have another girlfriend, and that one is a real beauty,” he says opening his eyes widely. He opens the fridge again and this time grabs for the tomatoes and even more cheese and then pours himself another Savanna.

“What do you expect me to do, Carlos?” he answers angrily, with his hands on his hips. “I am in Liberia, Yeah man, I am in Africa. I don’t know how to be alone.” Frankie stretches his neck. “You know man, there were days in Athens when I would spend hours and hours glued to the TV, the whole damn day, because nobody wanted to speak to me on the street, because it’s much harder there.

Yes, I have a wife, but can you imagine what would happen if I went to France! My father-in-law is going to be very disappointed, but I am not going to France. Man, France is not Africa. I have my mates here, I can call them up and nobody makes me feel like a stranger. I feel at ease here, I am the king.” Frankie looks through the window as he puffs out his chest a little.

A hippie has just left the house carrying a video camera. Gilberto is back in the kitchen flaunting his oxtail around and explaining that he is blessing us. Apparently, in Africa, oxtails are used to bless people. “Indeed,” says Frankie, as he nods affirmatively and heads for another Savanna. He digs through the fridge and finds some more cheese. Gilberto looks at Frankie: “What’s the matter with you, man?” Frankie laughs and then Gilberto laughs too. They are both cracking up in laughter and it seems as though the whole building is being tickled to death.

Frankie takes another swig and recalls saying goodbye to his wife. “It was just awful.” “Jesus man, there’s always something going on with you…” says Gilberto as he casts a sideways glance towards me. Frankie interrupts him, while he heads for walnuts in the pantry, and says: “Awful, awful.  The truth is that I don’t feel like going back to Greece.

What for? So that the banks can fuck me over again? To find my post-box full of letters? Nah man, I’d rather stay here with my mates, no stress, in Africa!”

We all take a seat. I leave the great debaters to their debate on umbrellas and take a closer look at the oxtail, which now rests on the granite countertop. Frankie checks his watch and suddenly says that he has to leave to pick up his girlfriend.  He looks steadily in the face of Gilberto, who ends up handing over the keys to his 4×4. “But buy some water,” adds Gilberto. Frankie turns a tad, shows his profile but remains silent. “We need water, man, we’re flipping dying of thirst.” says Gilberto again as he sets his eyes on Frankie, who is now standing like a statue. “Are you asking for money, you son of a bitch?” asks Gilberto shortly after, “well take this and be off with ya.”

I’m also leaving. As we walk down the stairs, Frankie says that Greece is in a real mess, that being there is unbearable, and then the echo takes over: “Greece is in a mess, ess, ess, ess.” We leave the building and Frankie opens the car door to Gilberto’s Toyota Prado. We get into the car and the Liberian drives comfortably down Tubman Boulevard, all that’s missing is for him to hang his arm out the window, but instead he opens his mouth to utter that everything is in a state, and he puts his foot down on the accelerator.

He really puts his foot down, until we turn up at his girlfriend’s house on 12th Street, land side. “You know man? My girlfriend could have been a millionaire. Back in the day, this house that you’re seeing looked like a palace, it was almost made of gold, they had at least 100 domestic workers. But things are bad, very bad.” As Frankie relates a brief history of Liberia to me, the back door opens and his girlfriend gets in the car. Under her red robe, her eyes seem to be formally dim, yet informally they are luminous.

We then head to the Stop and Shop supermarket. Frankie swaggers around like a sheriff patrolling the village, dishing out orders, almost raising his voice. “Where’s the water, man? No, no, no! I don’t want that one, bring me some good water, come on hurry up! I don’t have all day, I have to spend this money!” he barks at the shopkeeper.

Frankie pays for the water, and whatever happened to the change is a mystery that Discovery Channel will have to solve. We come back to the car. Frankie hasn’t even turned to look at his girlfriend the whole time that he’s been driving. “Does she not care that you ignore her?” I enquire. Frankie turns back to look at her and she answers, in a formally dim voice that is informally vibrant: “There’s no problem.”

We are back home.  I let Gilberto know that there was change, but Gilberto affirms that Frankie will keep it: “He’s just a typical guy from around here.” Frankie laughs, and Gilberto joins in. I also eat cheese and I drink beer. Shortly afterwards, we all sit down to watch a Nigerian film about a very fat woman in the middle of the jungle drinking a bottle of peach liquor with a cigar hanging on the side of her mouth. She has just wounded a guy in a blue polo shirt with a knife, and now he’s running after her looking rather terrified. “She’s a witch that woman, it’s witchcraft,” states Frankie as he sets about to send a message on his iPhone.

By the way Carlos, do you have a car?” “Yes,” I answer almost unconsciously, hypnotised by a TV ad for soft drinks. Frankie stretches out on the couch like ‘The Nude Maja’, and gently replies: “I could sell you a better one, at a friendly price.” “I’ll bear it in mind,” I respond, turning my gaze back at the TV. I can see a woman climbing a tree.

Frankie grimaces and starts playing with his phone again, and as his girlfriend comes back from having cleaned the kitchen, I decide to leave. Everyone gets up to say goodbye. Gilberto gives me a hug, and Frankie sighs: “You are so lucky to be here, man. Over there everything is in a state, it’s in a state there man.” He slowly slides his arm around his girlfriend’s waist whilst his little finger checks to see that his member is in place. I think I went as far as nodding.  I leave Gilberto’s house and look at my watch; ugh, it’s late.

IS THERE ANY WAY OF UNDERSTANDING TIME IN AFRICA?
GOOD MORNING O LIBERIA!
TRIP TO BUCHANAN (2) of (6) EXPLORING THE CAPITAL OF GRAND BASSA