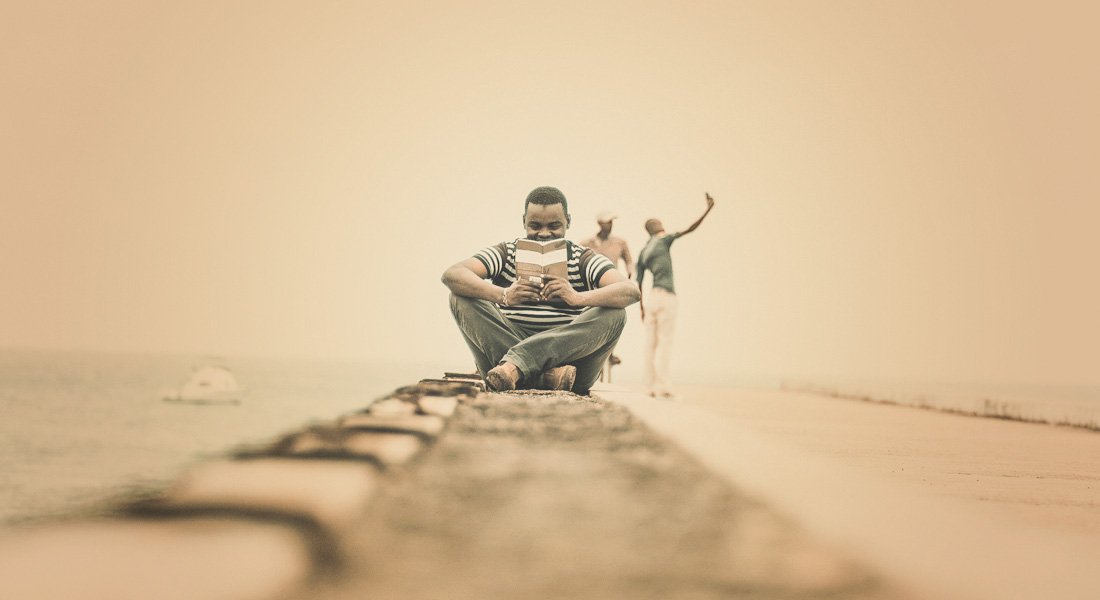 I can’t help it. I am reading an interesting novel about a violinist who loses his talent out of the blue, but I cannot help it. Pages fourteen and fifteen have been violently wiped off the screen that is my eyes and I can no longer breathe. The pages are suffocating under the weight of my belly, which is passionately kissing them the way Michael Corleone kissed his brother, Fredo in Havana. Pages fourteen and fifteen can no longer see anything. They’re glued to my lap. They’re going blind. Just like that. Because I am sitting in a plane that now stands calm and steady on the runway at Conakry airport just before take off for Monrovia. In a plane that is practically empty and I cannot help but look through the window into that sunlight that is shining through right now. I look through the window.

And I think that I have begun to understand something.

And perhaps now I know why it is that the air strokes me. Why do I feel that two and two is four? I have time. I have time to sum up two and two, and the answer is four. Foooooour. Four. Four.

I look through the window and can see the city of Conakry in the distance nearby, looking organic from mere carelessness. Some vans are trying to join a road whilst white, yellow and turquoise cars drive past them. Stalls caress the side of the road, along with dismantled houses that blend in with lazy trees, trees that have lost interest, like those trees that sit in the back of the classroom and answer yes to the teacher’s questions so as to plunge all the sooner back into their own world. A world of contemplation. A vacant world of idleness.

“It’s the energy,” a friend in Barcelona once said to me.  We were seated at a Sushi restaurant in Via August, savouring our Californian rolls and sailing away to Prince’s Purple Rain, maybe momentarily tearful as we held on to that instant, which was impossible. But nonetheless. The heart likes to rush. Sadness gives a warning. Blackness prevails. An elegy about the intangible horizon. “It’s the energy. It’s the energy of cities”, says my friend. In Barcelona, you can find anything you want: walking down Las Ramblas is a gift, drinking red wine makes your face swell with pleasure and everyone smiles. In Barcelona, you can find anything you want. But nonetheless.

I look through the window in the plane. Pages fourteen and fifteen may well have died. I have killed them. I have killed you in Africa. Then, as the plane door opens after landing in Monrovia and I leave the plane, I think that I have begun to understand something.

They open the white door of the Toyota Prado for me. The driver is in a hurry but he moves slowly. The driver moves slowly but he is in a hurry. Comfort is sitting on the back seat, showing me the meaning of calmness with her colourful dress. Her dress has many tones of yellow and brown and green shortcuts with salmon-coloured, red and blue labyrinths…

I look at her in awe of a miracle, the way a father looks at his child when he notices that the child has grown, but she raises her head and gives me a frightened, confused look, and only then do I realise, I think I realise, that I have managed to catch sight of time. You know, it looks like greenish smoke that trails off, like sickly, languid green sea foam. You know man, I have seen everything come to a halt. At a standstill, at nothing and no one. A statue. That is what I am.

The car noisily keeps moving along in hope, in protest. We make progress (alas, you have to make progress) through a road flanked with green. A mother’s green. Nature. Palm trees. Mangoes. Pine trees. Green, oh so green. More green and oh so green.  I think that I have begun to understand.

There is no metro, stupid. There are no trains. There is no shopping mall.  No redhead. No voices. Only green. And more green. Oh so green. And light.

And blue flesh from heaven. And the odd houses. Houses invaded with stomachs, hoisted up by vulgar zinc, sometimes by blocks of cement asking something else from life. I think that I have begun to understand.

Look at them.  They walk slowly. You know man, I am looking at that boy emerge, going nowhere with the unhurriedness of summer, the peace of childhood, an empty agenda, no questions, no tasks. Your mind is your friend. Simply emerging. He scratches himself. Let’s watch more closely. He stops in the middle of the grassy track, on the red earth, and scratches himself. He takes his time to scratch himself. With his long and thick fingers, the boy scratches himself over and over again.

Colours and bodies. In the villages that dot the road from the airport to Robertsfield, colours and bodies move to the rhythm of stillness. That’s what it is. That must be why here, the roundness of my breath has been accomplished, like the last brush stroke of The Night Watch by Rembrandt.

Hi, I am Carlos Battaglini. It is time for me to take off the mask and reveal you a secret
BUY ME SOMETHING, WHITE MAN
AND ONE DAY I WENT TO THE BUSH IN LIBERIA (6 of 9) “THE CREEK THAT SPUTTERS BROWN AND GREY WATER”