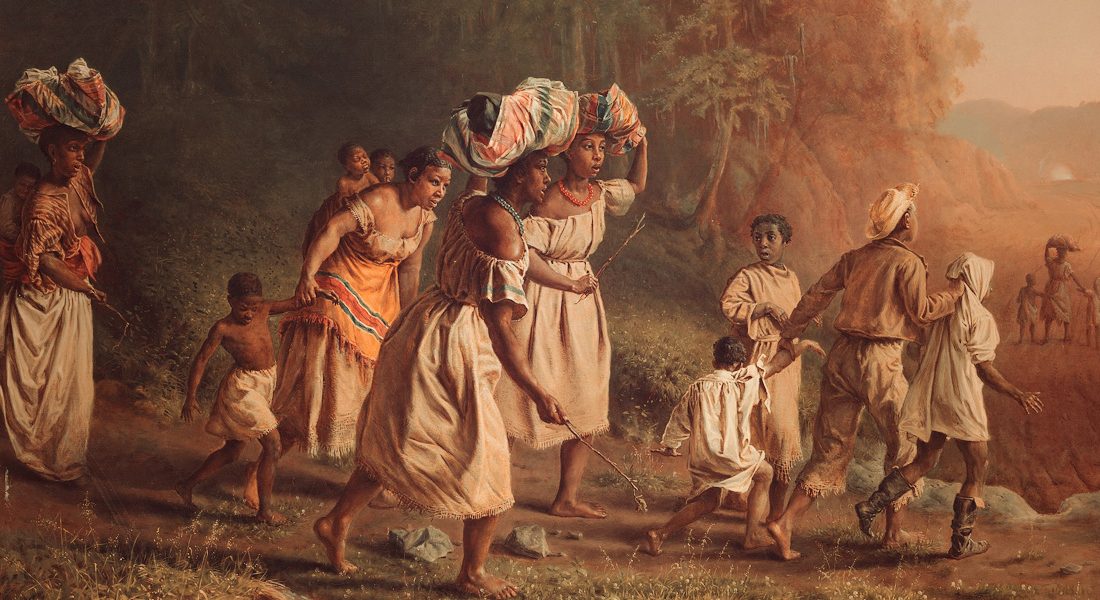 Helene Cooper tells us that she had ancestors on the colonisation ships coming from the United States, specifically Elijah Johnson, a man with a lot of character and a bit of a rebel, who came on one of those ships that arrived at the Liberian coast to settle there.

Shortly after the “deal” or rather bribe (as previously stated, Liberia was founded after the $300-bribe (extortion?) of King Peter at the hands of the Congos and the American Colonization Society), Elijah Johnson and other settlers who had not died of malaria, reached Bushrod Island to build their houses before the rainy season arrived. But the Deys opposed this ‘invasion’ and the settlers reacted by regrouping.

Dr. Ayres, the white agent who negotiated the contract with King Peter, gun in hand, tried to reach an agreement with the Deys, but ended up being kidnapped by them. They eventually released Ayres and even offered him weapons and tobacco so that he would declare invalid the agreement reached between the Congos and King Peter. But what happened was something quite different: Ayres returned and tried to convince the Deys (with the help of Jehudi Ashmun, another important mediator) to return to Sierra Leone. But no agreement was reached.

Elijah Johnson, on the other hand, refused to leave Bushrod Island. The situation was very tense. At this point, the settlers received some unexpected help: from the fragile King Boatswain, king of the Condoes. Furthermore, the Deys started to split and some of their leaders not only tried to make a profit by selling agreements that validated the sale of the land to the Congos, but they also agreed to join Boatswain so that would take the final decision.

Finally, Boatswain allowed the settlers (who had also won the support of the Kru) to stay. But this decision was not accepted by all, specifically by King Tom and King Ben. So when the settlers started to build their homes, war broke out. Meanwhile, the British had offered to help the settlers in exchange for keeping a piece of land, but they refused.

In 1822, the war was finally won by the colonialists (that’s how Cooper defines them), who extolled the figure of Matilda Newport, claiming that she had set off a decisive cannon that had killed many natives. So the 1st of December was declared Matilda Newport Day. Nowadays in Liberia this battle, which took place at Crown Hill, is celebrated every year.

Eijah Johnson himself would also become one of the leaders who defeated the countries on Matilda Newport Day.

Continuing on Elijah Johnson, he was on board the ship Elizabeth (note that coexistence was not easy on boats), which is the one displayed on Liberia’s coat of arms under the motto, “the love for liberty brought us here”. Apparently, Johnson’s parents may have been mulattos freed from the plantations for being “half white.” This was the case with many people from the growing middle class of Blacks freed in America: many of them had ‘pale’ skin; some may even have been mistaken for Whites because they were children of slaves who had been raped by the owners of the plantations in the south.

These landowners let the women go, to free themselves of the guilt or according to Cooper, “because of a bizarre paternal instinct.” This way, “White” children were moved away from the plantations, out of the sight of the landowners’ wives. To finish with Elijah Johnson, it is worth noting that his sons, Hilary R.W. Johnson, became the first president of Liberia to be born in Liberia.

As for the Cooper branch, Helene says they arrived in 1829 on the Harriet ship.  On board the Harriet (which was full of freed slaves from Virginia) were, among others, Joseph Jenkins Roberts, Liberia’s first president and James Sprigg Payne, who would come to be the country’s fourth president (today Liberia’s two airports are named after these two heroes) and even a West African prince, named Abdul Rahman Ibrahima, was also on board the Harriet.

Cooper tells us many more interesting anecdotes. For example, she says that at that time, the area was called Congo Town because it was informally considered the beginning of ‘civilization’ in Liberia. The author also refers to places in the novel that anyone who living in Monrovia would be very familiar with such as Abijaoudi Supermarket, the First United Methodist Church founded in 1822 and located on Ashmun Street, Bushrod island, “home of Lebanese merchants”, the Relda cinema in Sinkor where Bruce Lee-style films were shown, the Catholic Hospital, Bensonville or Bentolville in Paynesville which Tolbert wanted to convert into “the Versailles of Liberia” and obviously she talks of Sugar Beach which I eventually discovered was on the beach side of Thinkers Village.

Cooper ensures that Samuel Doe used Sugar Beach as an anti-terrorism training ground, when in fact the beach was used to carry out summary executions.

On the other hand, Cooper also reveals other details of the Liberian culture such as it being bad luck to step on lizards (numerous in Liberia), the impact of having her hair permed, the huge amounts of Ovaltine that was consumed, the Liberians fear of bathing at the beaches for spiritual and safety reasons (Helene herself never swam at Sugar Beach) the fact that many Liberians bathe in their homes with caustic soda, Liberia’s disbelief at the discovery of the moon in 1969 which prompted many Liberians to say that “White men can lie,” because nobody really believed that Neil Armstrong had landed on the moon…

The novel also allows one to get to know typical Liberian expressions such as “ajá”, “a-ya”, “same pa, same ma”, “been-to” (referring to Liberians who have lived or studied outside of Liberia, mainly in the United States) or “I hold your foot” (to beg). I also found it curious when Cooper, at one point, writes “Oh. My. God.” Something that is distantly reminiscent of poetic prose. The novel also helps us get to know Liberian society structures such as the Palaver Hut, an African meeting site as said previously.

“I expected a different Liberia”. A literary review of BLUE CLAY PEOPLE by William Powers (1) of (3)
LIBERIA WAS FOUNDED BY SLAVES. Literary review of Helene Cooper’s ‘The House at Sugar Beach’ (1 of 5)